In Mathematic the four basic arithmetic operations are addition, subtraction multiplication, and division. Based on the problem requirement, the type of arithmetic operation has chosen. For example, to share 100 chocolates equally among 25 children, we need to divide 100 by 25. Thus, each child will get 4 chocolates. In this article, we are going to discuss one of the arithmetic operations called “Division or Divide” with its symbol, division math formula, division of fractions, decimals, polynomials and so on with many solved examples.

The meaning of divide is to separate into two or more equal parts, areas, classes, categories, groups or divisions. In simple words, the meaning of divide is to distribute the whole thing to a group in equal parts or making equal parts. Suppose, a diagonal of a square divides it into two triangles of equal area. The result of a division operation may or may not be an integer. Sometimes, the result will be in the form of decimal numbers.

For more Information on Division Process, Watch The Below Video 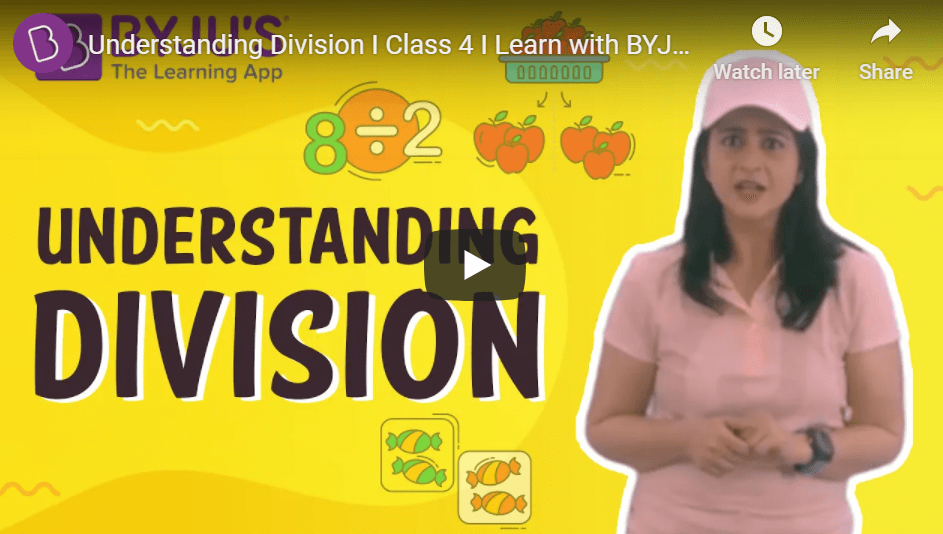 The symbol used to represent divide or division is ÷, slash (/) or a horizontal line ( _ ). These symbols are used as per convenience while dealing with various types of problems and calculations. Also, x/y or

Thus, the result is the same in all three representations.

The four important terms used in the division operation are dividend, divisor, quotient and remainder. The formula to calculate the division of two numbers is:

The dividend is the number, which is being divided

The divisor is the number, which divides the number (dividend) into equal parts

The quotient is the result of the division operation

The remainder is the leftover number in the division operation.

Here, 46 is the dividend

Click here to know how to divide the numbers in detail.

We know that division is one of the primary arithmetic operations in maths. This is used in solving and simplifying various types of sums and expressions. Below are a few sums with solutions that involve division operation.

Also, go through the division sums which include various types of numbers and expressions.

We can also perform division operations on fractions. While dividing fractions, the division operator needs to be converted into multiplication. This can be understood in a better way using the example given below:

This can be written as:

Learn more about fractions and division of fractions in maths here.

First, we have to express the given decimals in terms of fractions as:

Now, convert the division into multiplication as explained while solving for fractions.

Unlike numbers and fractions, polynomials can also be divided by another polynomial. However, polynomial division can be performed in two methods. One is the polynomial long division, which is quite similar to the division of numbers but polynomial expressions will appear instead of numbers. Another method of dividing polynomials is synthetic division.

Click here to get more information about the synthetic division of polynomials along with examples.

Below are a few practice problems on dividing various types of numbers.

What is meant by the divide in math?

In maths, the meaning of divide is to operate division, i.e., to see how many times a divisor goes into another number. x divided by y is written as x/y or x ÷ y. This can be read as “x by y” or “x over y”.

How do you divide division?

To divide the given numbers, the long division method is preferred for better understanding, especially when the result of the quotient is not an integer.

What are the 3 parts of division?

The three main parts of any division process are namely dividend, divisor and the quotient. There is another parameter which is 0 in some problems and integer in some, that is called the remainder.

Can 1 be divided by anything?

No, when 1 is divided by any number or expression, the result will be a positive integer except for 1. All the other numbers will result in decimal numbers when they divide 1.

What is 1 divided half?

We know that, while dividing numbers by fraction, the division operation should be converted to multiplication. Thus, 1 divided by half (i.e., 1/2) can be performed as given below:

To learn more about division and other mathematical operations, download BYJU’S – The Learning App today!

Test your knowledge on Divide
Q5