We often read numbers in words such as hundred, thousands, lakhs, crores and so on. What numbers have more digits than we can read? For example, the mass of Earth is 5972190000000000000000000 kg. This cannot be read in simple words. Thus, to pronounce these types of numbers we make use of exponents. In this article, a brief introduction of exponents is given along with rules, properties and examples.

Different laws of exponents are described based on the powers they bear.

Multiplication Law: Bases – multiplying the like ones; add the exponents and keep the base the same.

When bases are raised with power to another, multiply the exponents and keep the base the same.

Let ‘a’ be any integer or a decimal number and ‘m’, ‘n’ are positive integers, that represent the powers to the bases such that the above laws can be written as:

These laws referred to the properties of exponents. These are used to simplify complex algebraic expressions and write the large numbers in an understandable manner.

Watch The Below Video To Understand Exponents 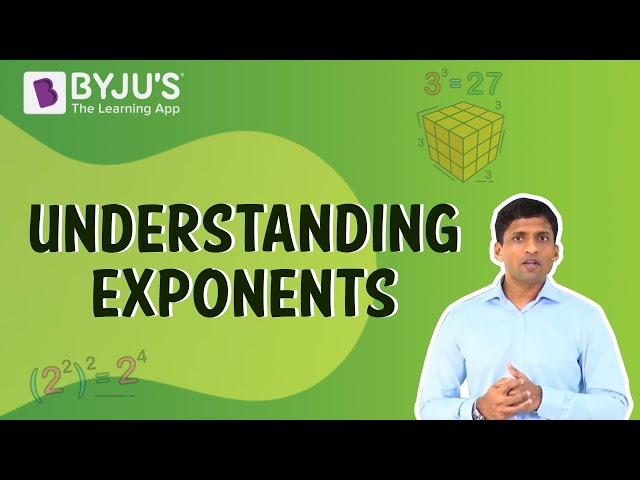 Exponents have certain rules which we apply in solving many problems in maths. Some of the exponent rules are given below.

Zero rule: Any number with an exponent zero is equal to 1.

Negative Exponent Rule: If the exponent value is an negative integer, then we can write the number as:

The below table shows the values of different expressions in terms of exponents along with their expansions and values. This will help you in understanding the simplification of numbers with exponents in detail.

To learn more about exponents and other maths related concepts, download BYJU’S – The Learning App today!

What is an Exponent?

How do you express the number with a rational exponent?

How do you write the negative exponent rule?

If the exponent value is an negative integer, then the number can be expressed as:
a^{-k} = 1/a^k
This is the negative exponent rule.

What is the zero exponent rule?

Zero exponent rule states that any number with an exponent zero (0) is equal to 1.