Important questions for Class 8 chapter 3 – Understanding quadrilaterals are given here. Students who are preparing for final exams can practice these questions to score good marks. All the questions presented here are as per NCERT curriculum or CBSE syllabus.

Students can also reach Important Questions for Class 8 Maths to get important questions for all the chapters here.

Questions and answers are given here based on important topics of class 8 Maths Chapter 3.

Q.1: A quadrilateral has three acute angles, each measure 80°. What is the measure of the fourth angle?

Let x be the measure of the fourth angle of a quadrilateral.

Sum of the four angles of a quadrilateral = 360°

We know that the sum of all internal angles of quadrilateral ABCD is 360°.

By angle sum property of quadrilateral,

Let the four angles of the quadrilateral be x, 2x, 3x, and 4x respectively.

The sum of four angles of a quadrilateral is 360°.

(i) which of them have their diagonals bisecting each other?

(ii) which of them have their diagonal perpendicular to each other?

(iii) which of them have equal diagonals?

(i) Diagonals bisect each other in:

(ii) Diagonals are perpendicular in:

(iii) Diagonals are equal to each other in:

Q. 6: Adjacent sides of a rectangle are in the ratio 5 : 12, if the perimeter of the rectangle is 34 cm, find the length of the diagonal.

Q. 8: ABCD is a parallelogram with ∠A = 80°. The internal bisectors of ∠B and ∠C meet each other at O. Find the measure of the three angles of ΔBCO. 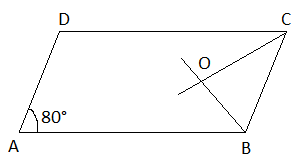 Q. 9: Find the measure of all four angles of a parallelogram whose consecutive angles are in the ratio 1 : 3.

Q. 10: A diagonal and a side of a rhombus are of equal length. Find the measure of the angles of the rhombus. 1. How many sides do a regular polygon have, if the measure of an exterior angle is given as 24° ?

5. When one angle of a parallelogram is a right angle, then what is the name of the quadrilateral?
(a) kite
(b) rectangle
(c) rhombus
(d) square