Measuring angles is a significant topic in geometry. An angle can be measured using a protractor, precisely. An angle is measured in degrees, hence its called ‘degree measure’. One complete revolution is equal to 360 degrees, hence it is divided into 360 parts. Each part of the revolution is a degree. If we know how to measure angle, then it will be very easy to construct an angle using a protractor.

Any angle whether it is acute, obtuse, reflex, or right angle, can be measured using a protractor. Although based on the right angle, we are able to differentiate between acute, obtuse or reflex angles. But if we have two acute angles to measure, then we cannot determine the greater angle among the two. Therefore, we have to use a protractor to measure the angles accurately. 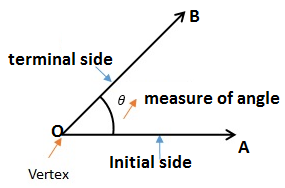 There are different types of angles based on their measures, such as:

How to Measure angles using Protractor?

Suppose we have an angle to measure say, ∠ABC. Follow the steps given below to measure the angle.

Step 1. Put the protractor above the line BC such that the midpoint of protractor is at point B.

Step 3. The protractor has two ‘scales’ marked from 0 to 180 degrees on both the ends. Take the reading where BC coincides with the 0 degree.

Step 4. Now from 0 degrees, check the ray BA coincides with the curved edges of the protractor. This reading gives us the measure of angle ABC.

To measure the angle greater than 180 degrees, we can put the protractor on the arm of the angle upside down and then mark the point on the curved edge of the protractor.

For example, if we have to measure an angle equal to 210 degrees, then put the protractor upside down on the arm of the angle such that the middle point coincides with the vertex of the angle.

Now follow the same steps as we have discussed above for the angles less than or equal to 180 degrees.

How to Measure Angles by Folding Paper?

In Class 6 we were taught how to measure angles using a paper or by paper fold method.

For example, cut a paper in circular shape using a bangle or compass. Fold it once to get the shape of a semicircle. The straight edge of the semicircle formed shows the 180 degree angle. Again fold it into equal half and mark the folded line. Now, mark 90 degrees in this fold.

How should we measure angle accurately?

To measure angles precisely, we need to use a protractor.

What are the types of angles to be measured?

In geometry, there are basically six types of angles that can be measured using a protractor, they are acute angle, right angle, obtuse angle, straight angle, reflex angle and full rotation.

What is the symbol for an angle?

An angle is represented by the symbol ∠.

What is the measure of sum of two right angles?

The measure of angle which is equal to the sum of two right angles is 180 degree angle or straight angle.

Can we measure the angle greater than 180 degrees using a protractor?

Yes, we can measure the angles greater than 180 degrees using a protractor.