A step function f: R → R can be written in the form:

for all real numbers x.

If n ≥ 0, αi are real numbers and Ai are intervals, then the indicator function of A is χA, and it can be written as below:

As we know, for any function domain is referred to as the set of input values that can be taken for an independent variable in the given function. Range of a function is defined as the set of output values generated for the domain (input values) of the function. In the case of a step function, for each value of x, f(x) takes the value of the greatest integer, less than or equal to x. For example:

This can be generalized as given below:

Thus, the graph of a step function is as shown below. 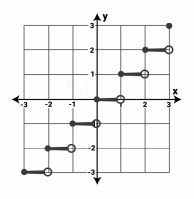 Draw a graph of the step function:

By plotting these values on a graph paper, the below graph will obtain. 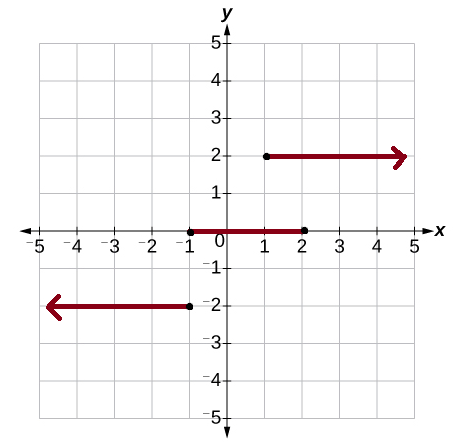 The above graph is viewed as a group of steps and hence it is also called a step function graph. The left endpoint in every step is blocked(dark dot) to show that the point is a member of the graph, and the other right end arrow indicates that the values are infinite. That means only definite values are shown with dark dots.

The important properties of step functions are given below:

One can observe step function when dealing with other types of functions for different reasons. For instance, a trivial example of a step function is a constant function. The simplest non-constant step function is sign function “sgn(x)”, because this function results -1 for the negative inputs and 1 (i.e. +1) for the positive input values. Other types include Heaviside function and rectangular function, etc.

To learn more about functions, types of functions and other maths concepts, download BYJU’S – The Learning App today!