In Geometry, the four basic translation or transformations are:

In this article, let’s discuss the meaning of “Translation” in Maths, translation in the coordinate plane and examples in detail.

Translation means the displacement of a figure or a shape from one place to another. In translation, a figure can move upward, downward, right, left or anywhere in the coordinate system. In translation, only the position of the object changes, its size remains the same.

It can change their path like at first it moves left then after it will take a turn right then again right and so on. If one point of a shape such as a triangle, rectangle, square, line, circle and so on., move five units in forwarding direction, then all the points will move by five units in the same direction. Suppose one point of a triangle moves four units in left direction then all points of triangle move four units in the left direction

In the below problem, let us discuss how the translation happens in the coordinate plane. 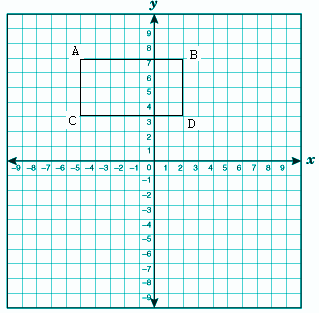 If a figure is translated by five units in a downward direction, then there is no change in x- coordinate or horizontal direction

So, we have to subtract by -5 in the y coordinate

After translation coordinate will be (x-0, y-5)

Therefore, the translated figure for the given coordinate is : 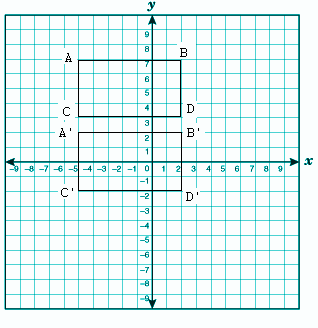 Some examples of translation are given below:

An example of translation towards the right is given below.

Here The figure “L” is shifted in the right direction with a fixed distance. The shape and size of the image is the same after the translation on the position of image changes

Here is an example of translating images in more than one direction. 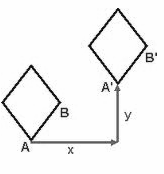 Here the rhombus is first moved x unit towards the right direction and then moved y unit in an upward direction. Thus, the rhombus AB is shifted to a new position A’B’.