Important Questions for Class 11 Biology Chapter 14 Respiration in Plants are the crucial study resource for students which helps in quick revision. They also go through the important topics which are more likely to be asked in the exam. By practising these questions, students can answer any type of question asked from this chapter in the examination.

For gaseous exchange, plants do not have a specialized system as seen in animals. Plant structures like lenticels and stomata carry out the gaseous exchange in plants. Living cells in plants have their surfaces exposed to the air. Life processes require energy that is obtained from oxidation of several macromolecules which is known as food. Through the process of photosynthesis, only cyanobacteria and plants can prepare their own food as they are capable of capturing sunlight and converting it into chemical energy which is accumulated in the bonds of carbohydrates such as sucrose, starch, and glucose. Read on to learn more about how plants respire.

Q.2. What is ‘Energy Currency’. Name the substance in animals and plants that act as an energy currency.
A.2. Energy is required by every cell to function. Energy currency releases and stores energy as and when required in the cell. In both plants and animals, ATP is known as the energy currency.

Q.3. In man and yeast, when does anaerobic respiration take place?
A.3. In man, it occurs when there is a lack of oxygen during cellular respiration, hence pyruvic acid is reduced to lactic acid by the lactate dehydrogenase. In yeasts also it occurs in the absence of oxygen.

Q.6. What is the product of the following?
a) Aerobic glycolysis in skeletal muscle
b) Anaerobic fermentation in yeast
A.6.

Q.7. Where is the electron transport system – ETS is located in mitochondria of a cell?

A.7. Inter membrane space – It is the site of oxidative phosphorylation.

Q.1. Why is a person fed with glucose or a fruit juice instead of a cheese sandwich that might give more energy, when a person is feeling dizzy?
A.1. Glucose gives instant energy as it is absorbed and reaches the blood. Cheese sandwich, however, requires time to digest and absorb. As sick people need an immediate energy supply, they are fed with glucose or given fruit juice.

Q.3. The final product of glycolysis is pyruvic acid. Write the three metabolic fates of the pyruvic acid in anaerobic and aerobic conditions as seen in the diagram below. 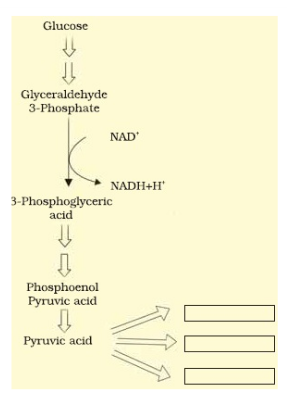 Q.6.Why are mitochondria called the powerhouse of the cell?

A.6.Mitochondria are known as the powerhouse of the cell because they play a vital role in releasing energy from the food molecules through a series of enzyme reactions.

Q.7.What is the end product of oxidative phosphorylation?

Q.8.Explain the term “Energy Currency” of the cell?

A.8.ATP is called the “Energy Currency” of the cell.

ATP – Adenosine triphosphate is the organic compound composed of the phosphate groups, adenine, and the sugar ribose. These molecules provide energy for various biochemical processes in the body. Therefore, it is called “Energy Currency of the Cell”.

Q.1. Explain the significance of Oxygen in aerobic respiration in the context of ETS.
A.1. The aerobic process of respiration occurs in the existence of oxygen and the function of oxygen is limited to the final phase of the process. Presence of oxygen is important as it drives the process by eliminating hydrogen from the system. Oxygen serves as the last hydrogen acceptor. In respiration, the energy of oxidation-reduction is used as opposed to the process of photophosphorylation where light energy is used for the generation of proton gradient that is required for phosphorylation. Hence it is called oxidative phosphorylation. Without oxygen, electrons cannot pass through the co-enzymes and in turn proton pump will not take place hence ATP will not be produced.

Q.2. What are some of the assumptions we make in the respiratory balance sheet? Are these valid enough to be applied to living systems? State comparisons between aerobic respiration and fermentation corresponding to respiration.
A.2. Following are the assumptions:

These assumptions do not apply to the living system as:

Listed below is the comparison between fermentation and aerobic respiration

Q.3. Explain Glycolysis. State where it occurs and its end products. In both aerobic and anaerobic respiration, determine the fate of these products.
A.3. It takes place in the cytoplasm of the cell and is seen in all living entities. In this, glucose goes through partial oxidation for the formation of pyruvic acid(2 molecules). It is obtained from the sucrose in plants which is the resulting product of photosynthesis. Invertase converts sucrose into fructose and glucose which enter into the glycolytic pathway. These are phosphorylated to produce glucose-6-phosphate which isomerizes to generate fructose-6-phosphate. A sequence of 10 reactions regulated by different enzymes occurs in glycolysis to yield pyruvate from glucose. The chief product of glycolysis is pyruvic acid. The cellular need decides pyruvate’s metabolic fate. The three modes in which various cells manage pyruvic acid produced by glycolysis are – lactic acid fermentation, aerobic respiration, and alcoholic fermentation. Under anaerobic conditions in unicellular eukaryotes and prokaryotes, fermentation takes place. Kreb’s cycle or aerobic respiration is observed in entities for the complete oxidation of glucose into carbon dioxide and water which requires the supply of oxygen. Discover more about biology and concepts related to respiration in plants by registering at BYJU’S.

1. Where does ETC found in eukaryotic cell?

3. What is the significance of stepwise release of energy in respiration?

5. Define RQ. What is its value for fats?