“Macromolecules are very large molecules that are formed by the polymerization of smaller molecules called monomers.”

The term molecule refers to very large molecules and something that consists of more than one atom. Herman Staudinger coined it in 1920. Macromolecules are so huge that these are made up of more than 10,000 or more atoms. 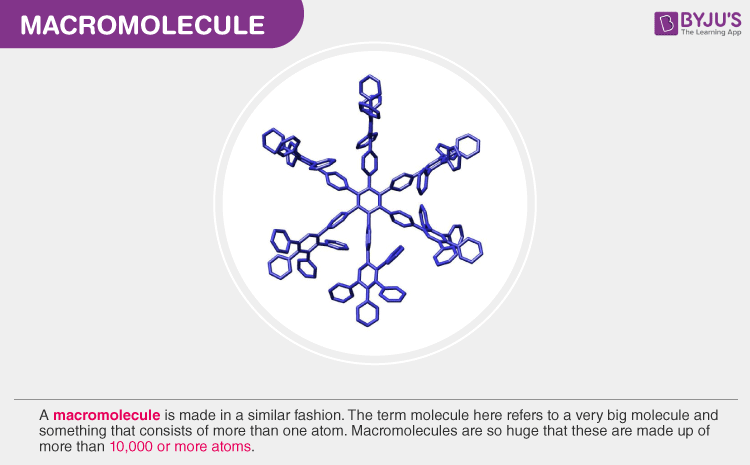 Macromolecules are also termed as polymers. They are formed by the polymerisation of molecules such as carbon, hydrogen and oxygen. The monomer units of macromolecules are polar in nature, with their heads and tails with different physical and chemical properties.

There are three main types of biological macromolecules, according to mammalian systems:

These are classified separately in different segments of a course. The principles that govern the organization of three-dimensional structure are the same for all of them; therefore, we could consider them together.

Carbohydrates are polymers of carbon, hydrogen and oxygen. They can be classified as monosaccharides, disaccharides and polysaccharides. Carbohydrates are found in starch, fruits, vegetables, milk and sugars. They are an important source of a healthy diet.

The nucleic acids include DNA and RNA that are the polymers of nucleotides. Nucleotides comprise a pentose group, a phosphate group, and a nitrogenous base group. All the hereditary information is stored in the DNA. The DNA synthesised into RNA and proteins.

Proteins are the polymers of amino acids. These include the carboxylic and the amino group. There would be no lipids or carbohydrates without proteins because the enzymes used for their synthesis are proteins themselves.

Lipids are a hydrophobic set of macromolecules, i.e., they do not dissolve in water. These involve triglycerides, carotenoids, phospholipids, and steroids. They help in the formation of the cell membrane, formation of hormones and in the and as stored fuel.

Following are the major examples of macromolecules:

Nylon, rayon and spandex consist entirely of macromolecules. These are created in certain steps:

DNA is a genetic material that contains nucleic acids which code for genetic material. During meiosis, the DNA is no longer a whole, and the nucleotides that remain are responsible for transferring the genetic information to the gametes.

Macromolecules are basically polymers, long chains of molecular sub-units called monomers. Carbohydrates, proteins and nucleic acids are found as long polymers. Due to their polymeric nature and large size, they are known as macromolecules.

There are three major groups of macromolecules that are essential in the industry, apart from biological macromolecules. These include plastics, fibres, and elastomers.

Elastomers are macromolecules that are flexible and stretchy. The elastic property lets these materials to be used in products like hair bands and elastic waistbands. These objects could be stretched, and they return to their original structure once released.

We wear fibre macromolecules. Nylon, Polyester, and acrylic fibres are used in everything from blouses, belts to shirts and shoes. Natural fibres include wool, cotton, and silk.

Hence, there are many objects that we use today are made up of macromolecules. Many types of plastics are made through a process known as polymerization, which is the joining of monomer units from plastic products.

To know more about macromolecules, its definition, types of macromolecules and its examples, keep visiting BYJU’S website or download BYJU’S app for further reference.

What are four important biological macromolecules?

What is the importance of macromolecules?

Most of the biological nutrients are macromolecules that are used by the body to carry out various life activities. These are made by the combination of monomers.