8000 in words can be written as Eight thousand. If the number 8000 represents a certain amount of money/the price of a particular thing/total cost of goods, etc., then we express it as Eight thousand rupees. Also, note that 8000 is a cardinal number since it denotes a specific quantity.

We generally write numbers in words using the English alphabet. Thus, we can read 8000 using the words in English as “Eight thousand”. 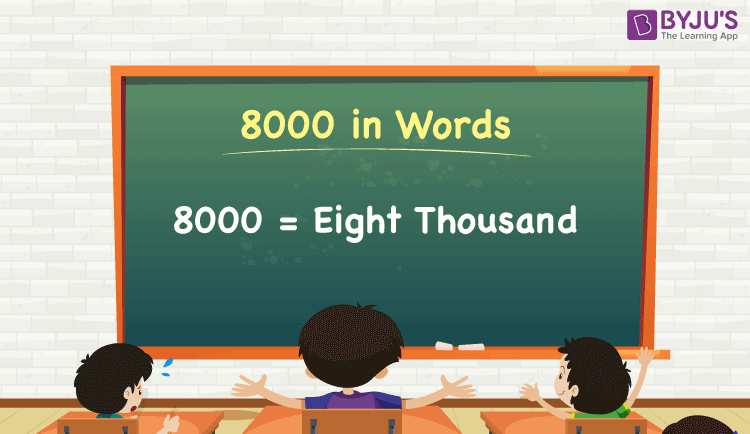 We can convert 8000 to words using a place value chart. This can be done as follows.

The number 8000 has 4 digits, so let’s make a chart that shows the place value up to 4 digits.

In the above place value chart, we can observe that the digits in ones, tens, and hundreds are 0s. Hence, we can consider the number at the thousands place, and by combining these terms, we get Eight thousand since 8 × 1000 = 8000.

We can write the expanded form of 8000 as given below:

Interesting way of writing 8000 in words:

Facts About the Number 8000

Frequently Asked Questions on 8000 in Words

The word form of the number 8000 is eight thousand.

On a cheque, we generally write 8000 in words as Eight thousand rupees only.