What is an Implicit function?

When in a function the dependent variable is not explicitly isolated on either side of the equation then the function becomes an implicit function.

It is very easy to solve when the equations take the form y = f(x). When a function is expressed in such a form it represents the explicit function. But it is possible to express y implicitly in terms of f(x). In such a case we use the concept of implicit function differentiation.

The unit circle can be specified implicitly as the set of points (x,y) fulfilling the equation, x2 + y2=1.

To make our point more clear let us take some implicit functions and see how they are differentiated. 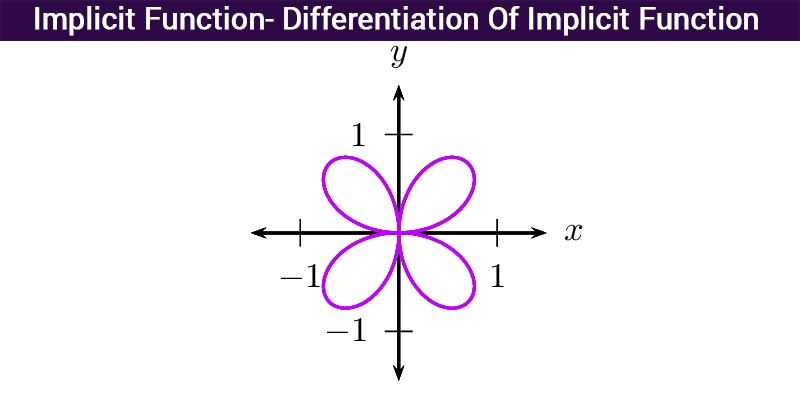 In mathematics, especially in multivariable calculus, the implicit function theorem is a mechanism that enables relations to be transformed to functions of various real variables. It is possible by representing the relation as the graph of a function. An individual function graph may not represent the complete relation, but there could be such a function on a constraint of the domain of the relation. The implicit function theorem gives a satisfactory condition to assure that there is such a function.

Suppose a function with n equations is given, such that, fi (x1 , …, xn, y1, …, yn) = 0, where i = 1, …, n or we can also represent as F(xi, yi) = 0, then the implicit theorem states that, under a fair condition on the partial derivatives at a point, the m variables yi  are differentiable functions of the xj  in some section of the point. Since, we cannot express these functions in closed form, therefore they are implicitly defined by the equations.

Since this equation can explicitly be represented in terms of y, therefore, it is an explicit function.

Now, as it is an explicit function, we can directly differentiate it w.r.t. x,

Now to differentiate the given function, we differentiate directly w.r.t. x the entire function. This step basically indicates the use of chain rule.

Therefore differentiating both the sides w.r.t. x, we get,

This represents the slope of the given curve.

Solution: Differentiating x2 + y2=25 with respect to x we get;

Solution: Differentiating x3 + y2=16 with respect to x we get;

Visit byjus.com to learn the concepts in a way you have never learnt before.