One of the best examples of the 3D shape is the sphere which is obtained from the rotation of 2D shape called the circle. Our earth is a good example of a sphere which is spherical. 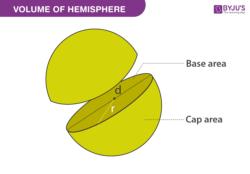 Where π is a constant whose value is equal to 3.14 approximately.

“r” is the radius of the hemisphere.

When the radius “R” is centred at the origin, it is given by

The Cartesian form or equation of a hemisphere with the radius “R” at the point (x0, y0, z0) is written as

Therefore, the spherical coordinates of the hemisphere are given as follows

A sample problem on hemisphere is given below

Find the volume of the hemisphere whose radius is 6 cm.

Substitute the value of r in the formula.

Therefore, the volume of the hemisphere is 452.16 cubic units.

Stay tuned with BYJU’S – The Learning App for many similar topics and also watch videos to learn with ease in an engaging way.

Test your Knowledge on Volume of Hemisphere
Q5