Students are advised to solve Telangana SSC Board Question Papers for Class 10 Social Science 2016 Paper 1 solutions to write the exam confidently. It is an important resource as it gives a complete understanding of the exam paper, weightage of marks, difficulty level, etc. By solving the previous year question papers students will get to know on which topic they should concentrate more. The previous year question papers will help students to evaluate their knowledge and improve their learning. 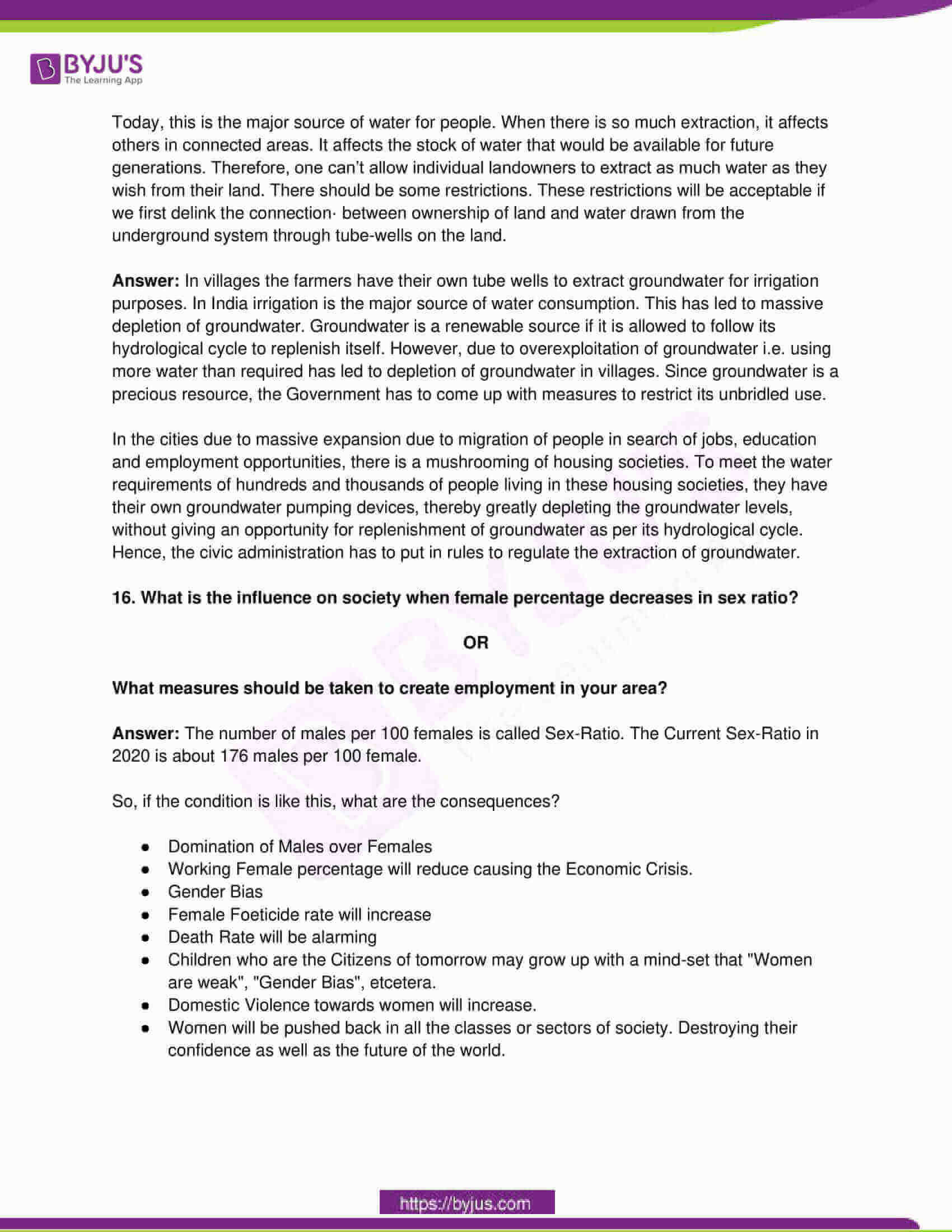 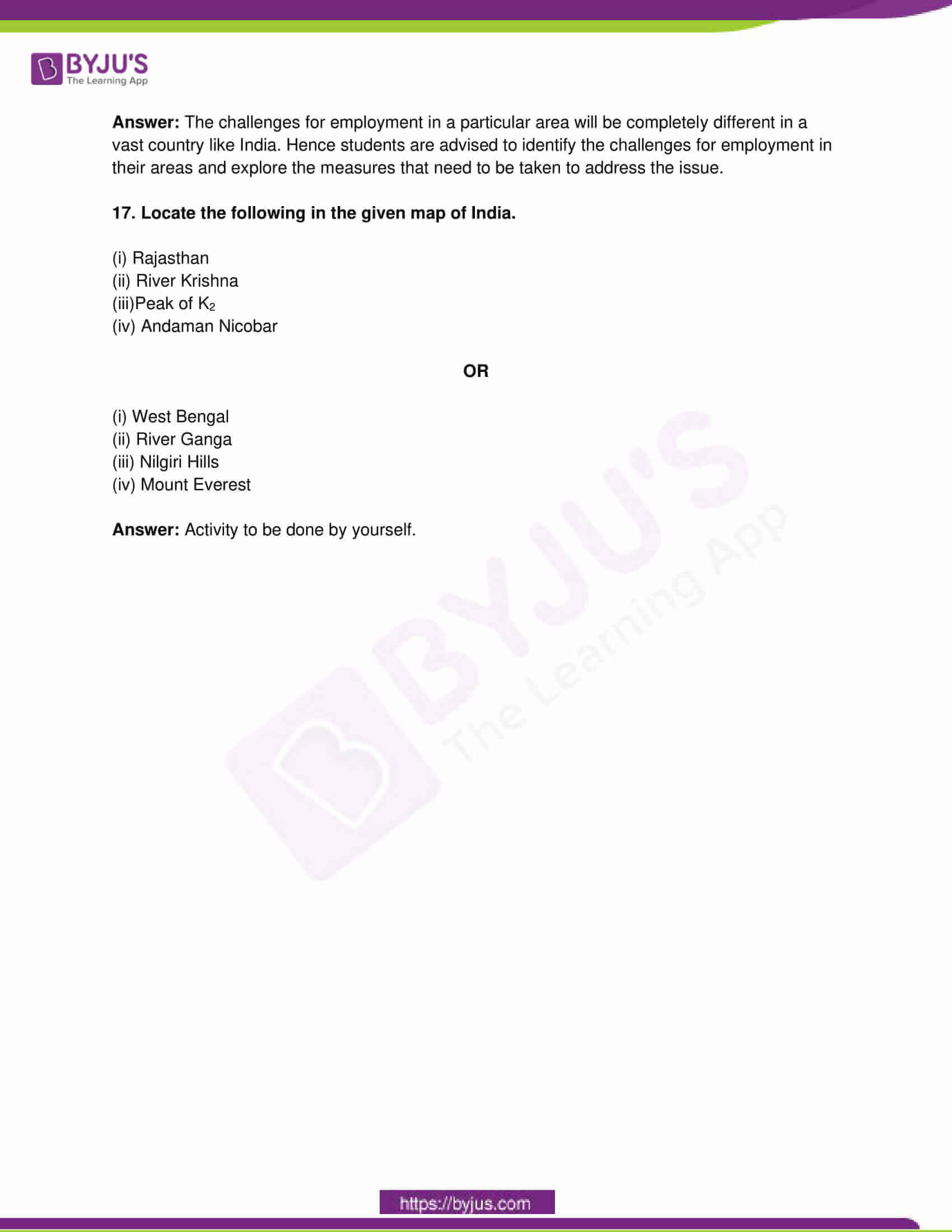 1. Give examples for Himalayan hill stations.

Answer: Some main hill stations of the Himalayas are as follows:

2. What were the conditions set by Maharashtra government for the selection of villages under Adarsh Gram Yojana?

Answer: The conditions set by Maharashtra government for the selection of villages under Adarsh Gram Yojana are:

3. Who are called as the Labour force?

Answer: The labour force is the number of people who are employed plus the unemployed who are looking for work.

Observe the following table and answer the questions 4, 5, 6 and 7.

5. Which two Asian countries have better HDI rank than that of India?

6. Which countries are lacking behind the average life expectancy of World?

7. What are the reasons for having less average schooling in India, Bangladesh and Pakistan?

Answer: The reasons for having less average schooling in India, Bangladesh and Pakistan are:

8. Mention the factors of production.

9. Categorise the drainage system based on its origin.

Answer: Depending upon the origin of rivers two broad drainage systems of India are generally recognised:

(a) The Himalayan rivers including the Indus, the Ganga, the Brahmaputra and their tributaries

(b) The Peninsular rivers which include along with their tributaries, a large number of rivers such as the Mahanadi, the Godavari, the Krishna, the Cauvery, the Narmada and the Tapi.

10. Observe below ‘Pie’ chart and analyse it.

12. Create a pamphlet on “Prevention of Migration.”

Write the advantages and disadvantages of Multinational Companies?

Workers are expected to work for a fixed number of hours and are paid overtime if they work overtime.

They are registered by the government and have to follow many rules and regulations such as the Factories Act, Minimum Wages Act, etc.

They get benefits such as paid leave, payment during holidays, provident fund, etc.

They also get medical benefits, drinking water at the workplace and a safe working environment.

They get pension when they retire

No security of employment, they can lose the job anytime.

They can be worked overtime without compensation.

They are not registered by the government, and they usually do not comply with the rules and regulations.

No additional benefits at work.

They are usually hawkers, labourers and people engaged in contract work.

They do not get pension when they retire.

Answer: The advantages and disadvantages of Multinational Companies are:

15. Read the following paragraph and write your opinion on it.

We are already experiencing the negative consequences of rapid economic growth on several fronts – the problem of groundwater and pesticides being two stark examples. We have several thousands of communities living off the environment. To destroy the environment means to destroy these communities.

Answer: Overexploitation of water resources is the primary reason for water scarcity in most of the cases. Water overexploitation happens when there is unequal access and excessive use of water among different social groups. Unplanned expansion of cities and growing population along with it causes water scarcity. Irrigation is the major water guzzler. To meet the growing demands of the large population, food production has to be increased. Another reason for water scarcity is the bad quality of water, it happens due to pollution of water caused by pesticides, chemicals, fertilisers, industrial wastes; thus making it dangerous for human consumption. India has a huge tribal population. They depend on the forests or environment for their livelihood as they are cut off from mainstream society. Destruction of the environment will destroy their livelihood and ultimately destroy these communities.

Read the following paragraph and write your opinion on it.

Today, this is the major source of water for people. When there is so much extraction, it affects others in connected areas. It affects the stock of water that would be available for future generations. Therefore, one can’t allow individual landowners to extract as much water as they wish from their land. There should be some restrictions. These restrictions will be acceptable if we first delink the connection· between ownership of land and water drawn from the underground system through tube-wells on the land.

In the cities due to massive expansion due to migration of people in search of jobs, education and employment opportunities, there is a mushrooming of housing societies. To meet the water requirements of hundreds and thousands of people living in these housing societies, they have their own groundwater pumping devices, thereby greatly depleting the groundwater levels, without giving an opportunity for replenishment of groundwater as per its hydrological cycle. Hence, the civic administration has to put in rules to regulate the extraction of groundwater.

16. What is the influence on society when female percentage decreases in sex ratio?

What measures should be taken to create employment in your area?

So, if the condition is like this, what are the consequences?

17. Locate the following in the given map of India.