Here, in this article we have provided pdf of Telangana SSC Board Class 10 Social Science solutions 2019 Paper 2. These solutions are essential study materials while preparing for their board exam. Some of the questions included in the previous year question papers might be repeated in the final exam paper. So, students should solve previous year question papers without any fail. 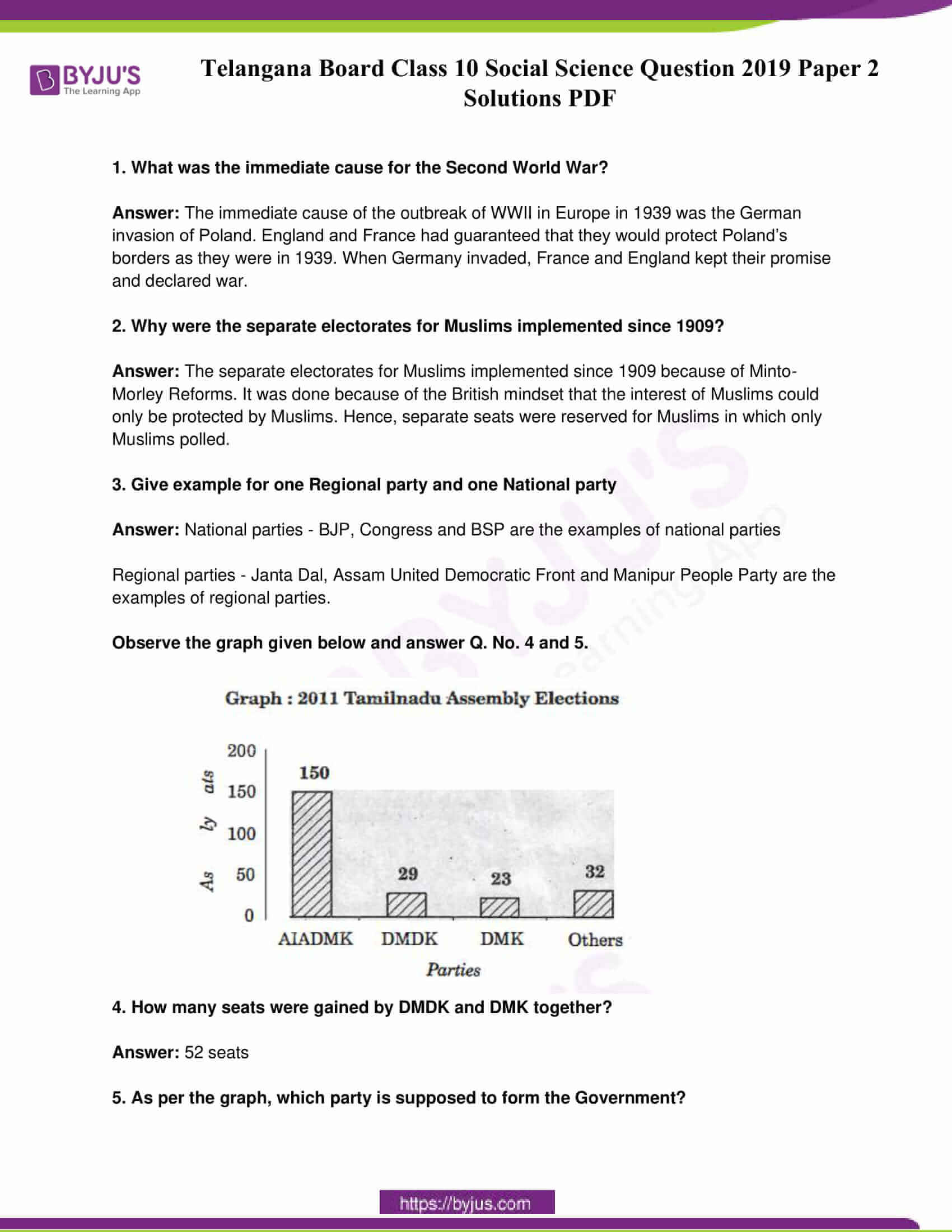 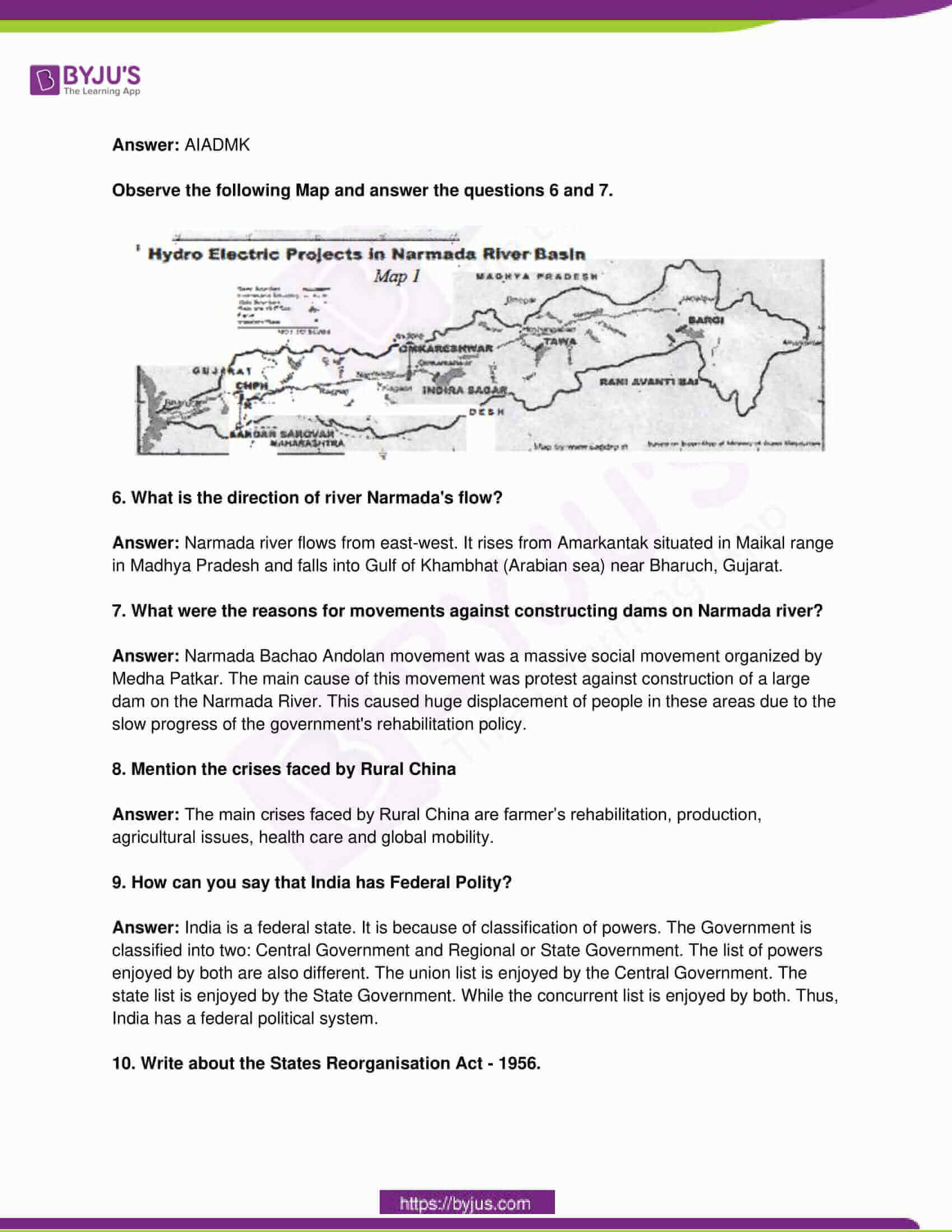 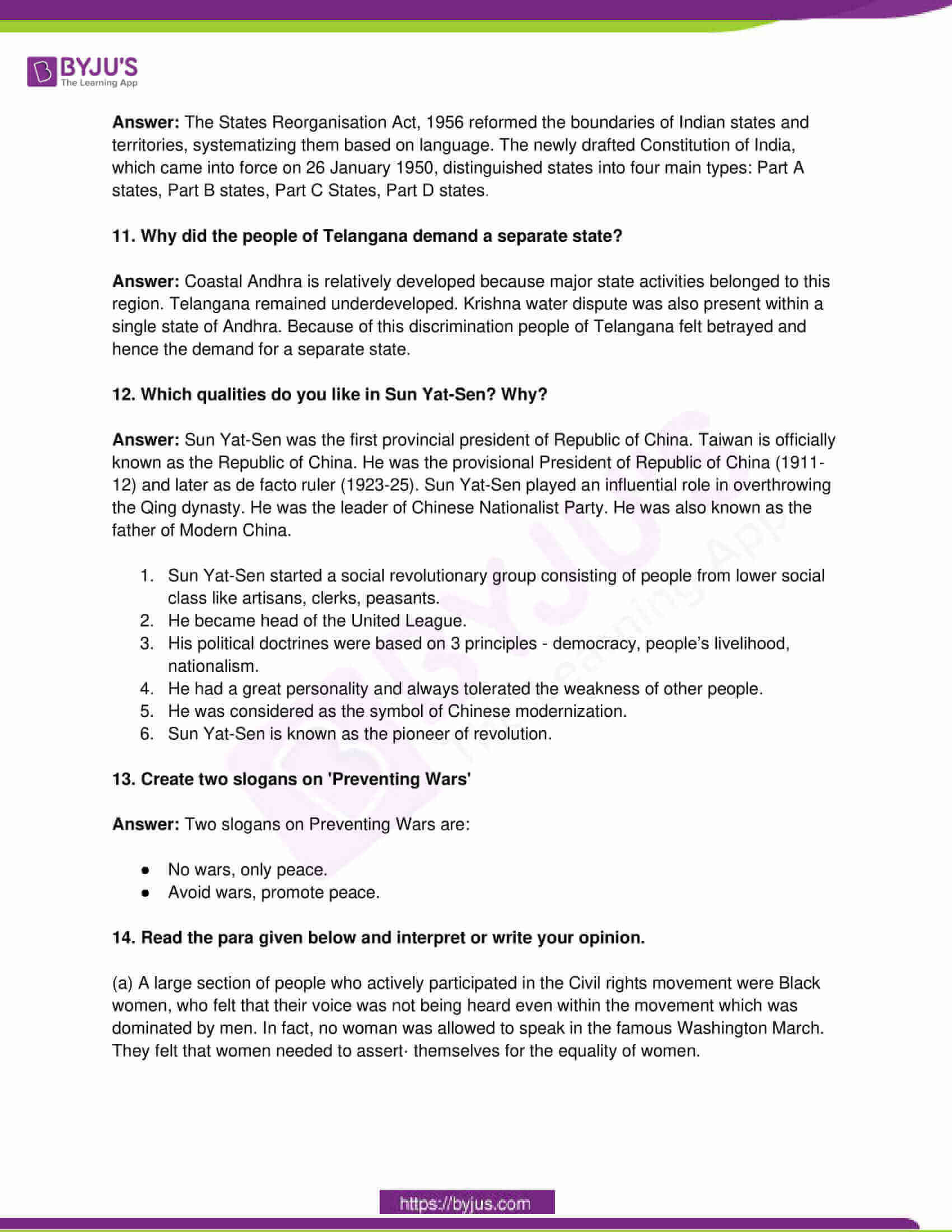 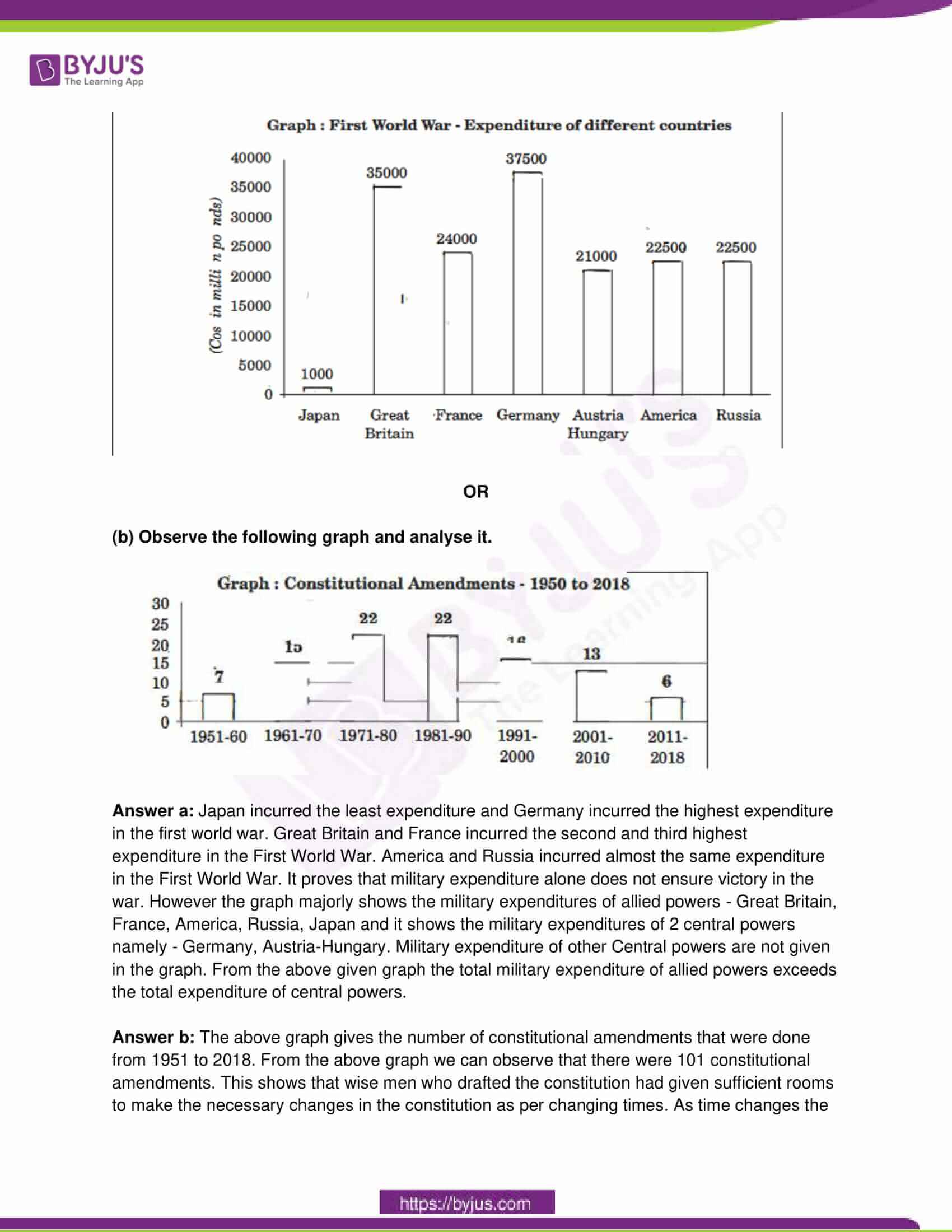 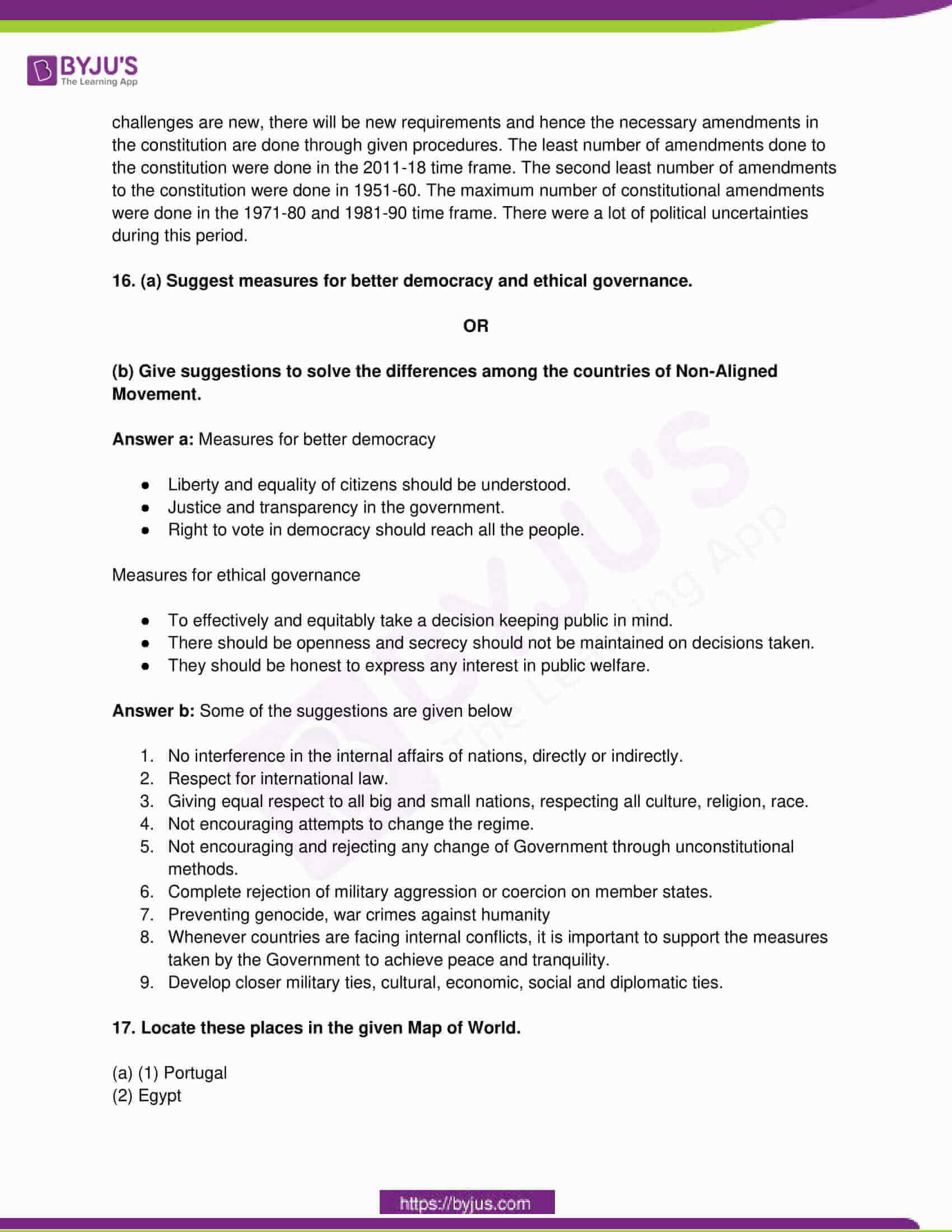 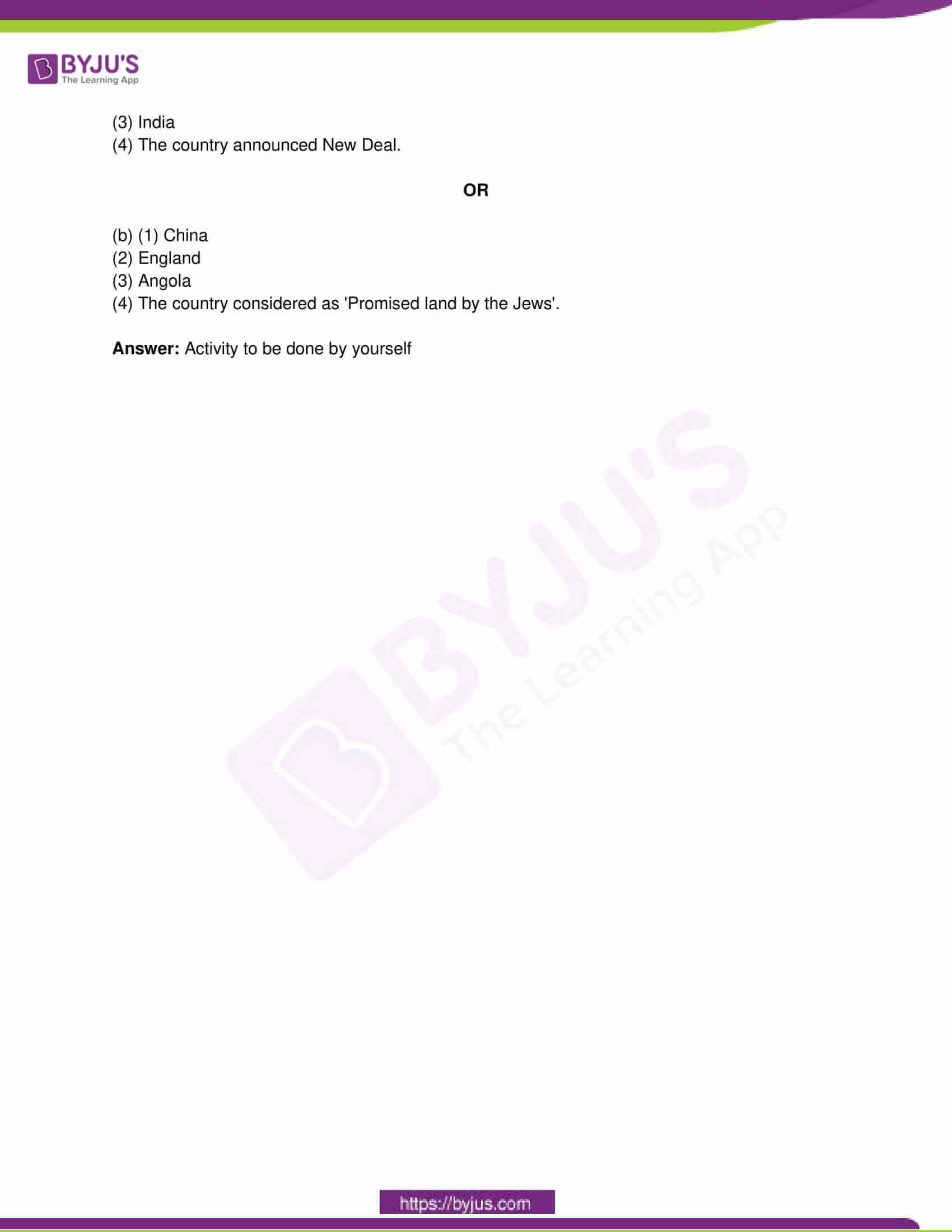 1. What was the immediate cause for the Second World War?

Answer: The immediate cause of the outbreak of WWII in Europe in 1939 was the German invasion of Poland. England and France had guaranteed that they would protect Poland’s borders as they were in 1939. When Germany invaded, France and England kept their promise and declared war.

2. Why were the separate electorates for Muslims implemented since 1909?

Answer: The separate electorates for Muslims implemented since 1909 because of Minto-Morley Reforms. It was done because of the British mindset that the interest of Muslims could only be protected by Muslims. Hence, separate seats were reserved for Muslims in which only Muslims polled.

3. Give example for one Regional party and one National party

Observe the graph given below and answer Q. No. 4 and 5. 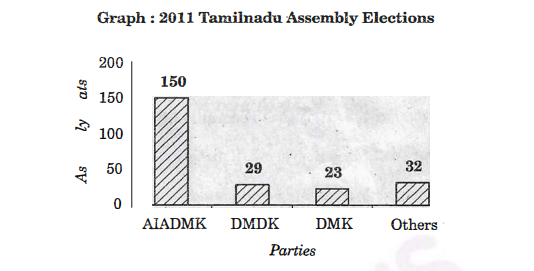 4. How many seats were gained by DMDK and DMK together?

5. As per the graph, which party is supposed to form the Government?

Observe the following Map and answer the questions 6 and 7.

6. What is the direction of river Narmada’s flow?

Answer: Narmada river flows from east-west. It rises from Amarkantak situated in Maikal range in Madhya Pradesh and falls into Gulf of Khambhat (Arabian sea) near Bharuch, Gujarat.

7. What were the reasons for movements against constructing dams on Narmada river?

Answer: Narmada Bachao Andolan movement was a massive social movement organized by Medha Patkar. The main cause of this movement was protest against construction of a large dam on the Narmada River. This caused huge displacement of people in these areas due to the slow progress of the government’s rehabilitation policy.

9. How can you say that India has Federal Polity?

Answer: The States Reorganisation Act, 1956 reformed the boundaries of Indian states and territories, systematizing them based on language. The newly drafted Constitution of India, which came into force on 26 January 1950, distinguished states into four main types: Part A states, Part B states, Part C States, Part D states.

11. Why did the people of Telangana demand a separate state?

Answer: Coastal Andhra is relatively developed because major state activities belonged to this region. Telangana remained underdeveloped. Krishna water dispute was also present within a single state of Andhra. Because of this discrimination people of Telangana felt betrayed and hence the demand for a separate state.

12. Which qualities do you like in Sun Yat-Sen? Why?

14. Read the para given below and interpret or write your opinion.

(a) A large section of people who actively participated in the Civil rights movement were Black women, who felt that their voice was not being heard even within the movement which was dominated by men. In fact, no woman was allowed to speak in the famous Washington March. They felt that women needed to assert· themselves for the equality of women.

Answer: The Washington march was one of most famous events in the history of the Civil Rights Movement. It is best remembered for ‘I have a dream speech’ of Martin Luther King Jr. One observation of this event was lack of black women representation in the event. Although many women civil rights groups had participated in the Washington March, women were not given the right to speak and they were sidelined. They just had a figurative role at the back of the stage. This event turned out to be sort of awakening for women, they realised the importance of not only fighting for rights of the blacks but also raise awareness and start engaging in feminist movements.

Read the para given below and interpret or write your opinion.

(b) On one hand, India was forced to open up and ‘liberalise’ its ·economy by allowing freer flow of foreign capital and goods into India: On the other hand, new social groups asserted themselves politically for the first time, and finally religious nationalism and communal political mobilization became an important feature of our political life. All this put the Indian society into great turmoil.

Answer: India was facing a huge economic crisis by 1991. It was facing a Balance of Payment issue. India had foreign exchange reserves that would last only for a couple of weeks. The Central bank refused to provide any further credit. The Government collapsed. One of the important leaders was assassinated. After elections a new Government was formed led by former Prime Minister PV Narasimha Rao. Manmohan Singh was chosen as the Finance Minister. He led the economic reforms of 1991 through Privatisation, Liberalisation and Globalization (LPG). Industries in India found better opportunities for business. Investments started increasing. GDP started rising and the people in Urban areas benefited more from these economic reforms. There was political turmoil because certain groups demolished a place of worship since it was built hundreds of years back on another religious place of worship. The evidence was put forward by the Archaeological Survey of India. It was the basis on which the Supreme Court of India brought a closure to the case through its judgements so that grievances faced by different groups are alleviated.

15. (a) Observe the following Bar – graph and analyse it.

(b) Observe the following graph and analyse it.

16. (a) Suggest measures for better democracy and ethical governance.

(b) Give suggestions to solve the differences among the countries of Non-Aligned Movement.

Answer a: Measures for better democracy

Answer b: Some of the suggestions are given below

17. Locate these places in the given Map of World.

(4) The country considered as ‘Promised land by the Jews’.