TN SSLC Board Class 10 Science 2017 Question Paper with solutions is considered as the best study material for those students who are aiming for high scores in the exams. They can download these questions and practise hard. This Class 10 exam question paper is used by students to score well in the Science paper of the board exams. Referring to the solutions given here after answering the TN Board SSLC Class 10 Science Previous Year Question Paper 2017 PDF will help the students to gauge their performance and plan their studies.

Students can now, with just a click, download the PDF formats of the solved or the unsolved question paper, as their preference. These clickable links are listed below in this article, along with the questions and answers on the web-page. Meanwhile, the students who have mastered all these complex concepts and formulas in the subject will find it easier to score high marks. They will find it easy to ace the TN Board Class 10 Science exam, as the questions could be based on the complex formulas and equations of the subject.

Students are encouraged to revise the entire subject for the exam and to solve the previous papers of TN Board Class 10 Science. Solving these papers is the best way to get an overview of the exam pattern with the marking scheme. Students can also gauge the difficulty level of the exams as well as scale their exam preparations with the help of these question paper solutions. 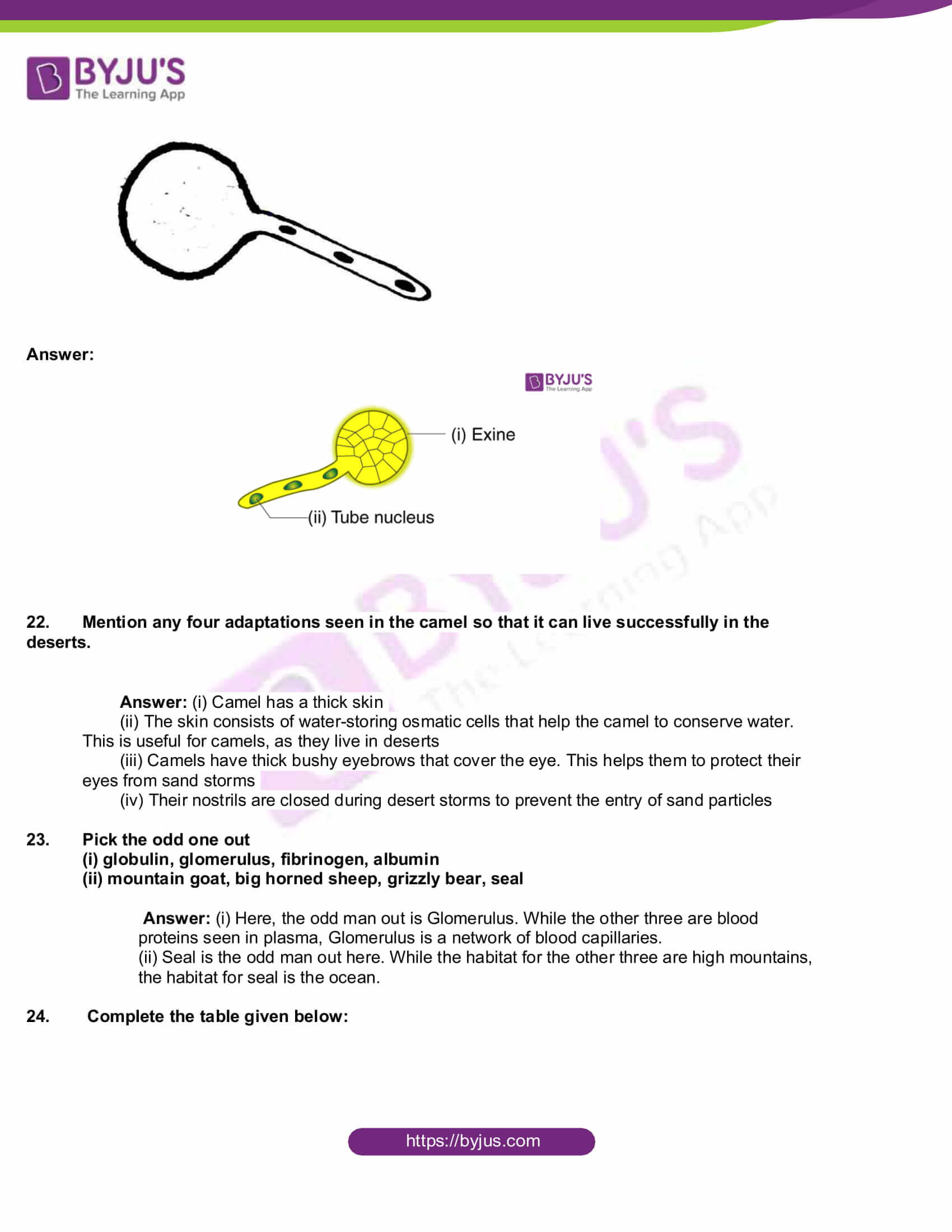 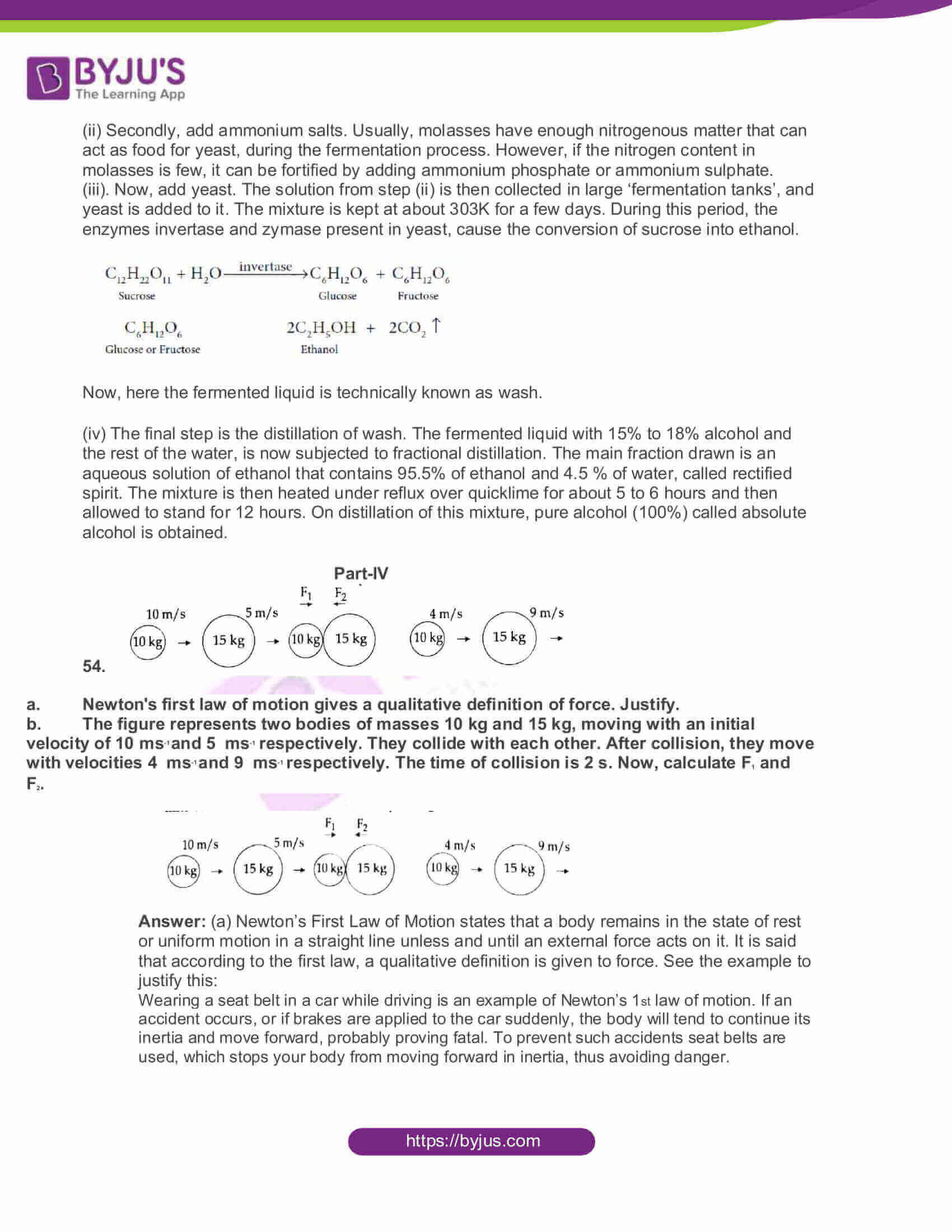 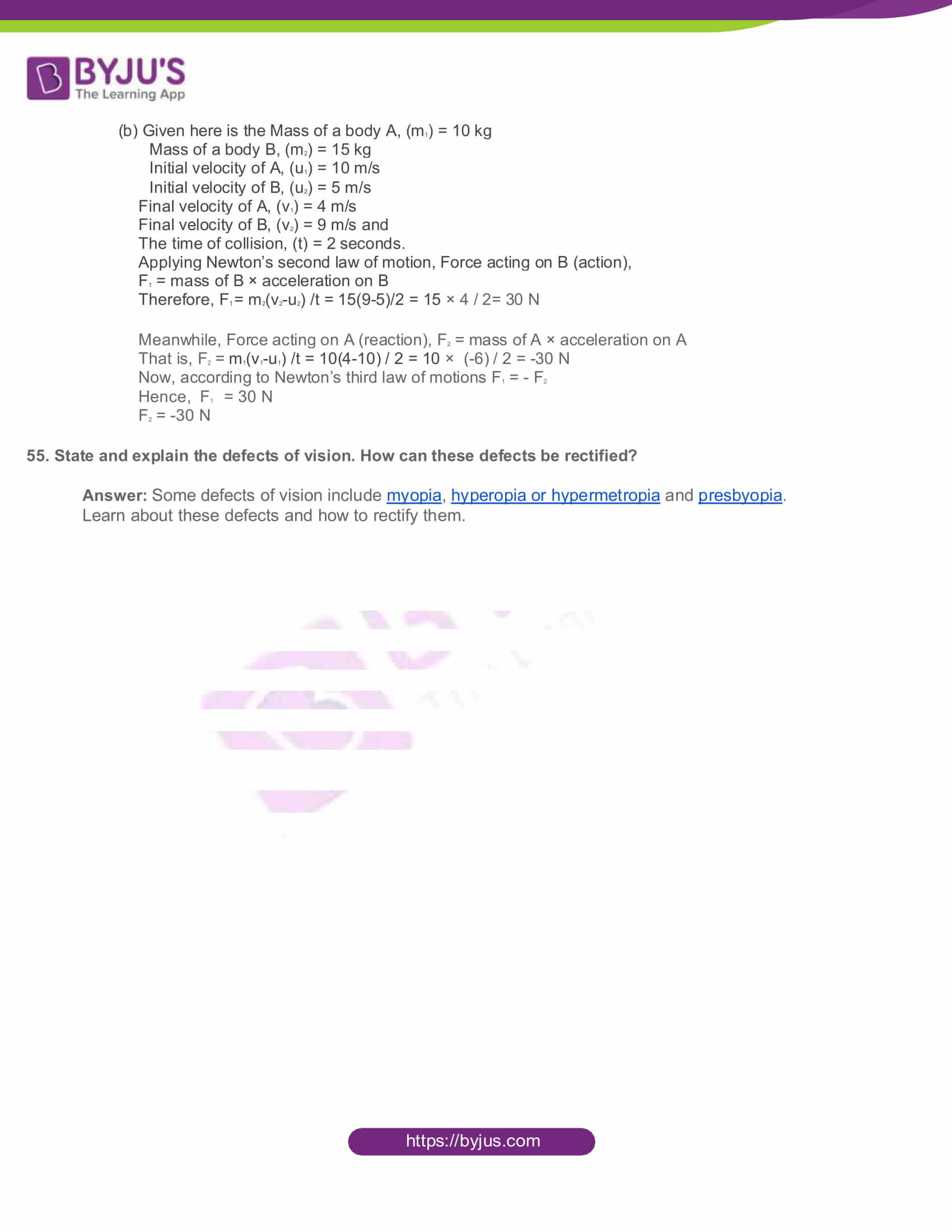 (i) The eye colour among human beings are varied as blue, black, brown, green etc. This is called as __________ variation

(ii) The dentition in the rabbit and the elephant are not the same. This is called as ________ variation.

Answer: The manipulation and transfer of genes from one organism to another organism to create a new DNA called the recombinant DNA(rDNA) is called Genetic Engineering. The term recombinant is used because DNA from two different sources can be joined together. Hence, genetic engineering is also called recombinant DNA technology.

Answer: The symptoms of the disease given here are wrong. The symptoms for Kwashiorkor include enlarged belly and swelling of the ankles and feet. For Marasmus, the symptoms are shrunken, wasted appearance, loss of muscle mass and subcutaneous fat mass.

(i) It is otherwise called supra renal gland 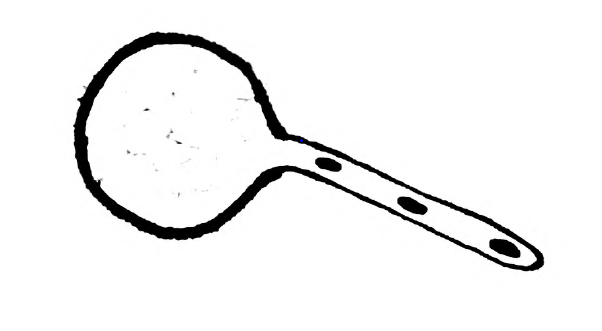 Answer: (i) Camel has a thick skin

(ii) The skin consists of water-storing osmatic cells that help the camel to conserve water. This is useful for camels, as they live in deserts

(iii) Camels have thick bushy eyebrows that cover the eye. This helps them to protect their eyes from sand storms

Answer: (i) Here, the odd man out is Glomerulus. While the other three are blood proteins seen in plasma, Glomerulus is a network of blood capillaries.

(ii) How does this movement differ from the movement of mimosa? Answer: (i) Geotropism is the movement of the plant parts in response to gravity. The roots grow towards gravity and are hence called positively geotropic. The stem, on the other hand, is negatively geotropic. Here, figure A depicts Geotropism. Meanwhile, figure B is for phototropism. In phototropism, the plant grows in the direction of light. The plants have a chemical called auxin, which reacts in response to light. This causes the cells of the plants to elongate. Growth towards light is positive phototropism, while that away from the light is negative phototropism. The stem grows towards the direction of light and is called positively phototropic. However, the root is called negatively geotropic since it grows away from the light source.

Also, learn more about Movement due to growth.

26. Sugar is converted into alcohol

(i) In the above reaction, which kind of process takes place?

(Ii) Which micro-organism is involved in the above reaction?

(ii) Yeast the single-celled fungi, which can perform anaerobic, alcoholic fermentation that is involved in the given reaction. They are used for the production of alcohol on a commercial scale.

28. Depict a food chain by placing the following organisms the correct trophic levels.

Answer: The food chain for this will be as given below:

29. What are the various liquid bio-fuels for transportation? (Any four)

30. Match the renewable and non-renewable sources:

31. Fossil fuels are formed by decomposition of biomass buried under earth over millions of years ago. Name any two fossil fuels.

Answer: Coal, crude oil and natural gas are all considered as fossil fuels.

32. What is the Brownian Movement?

Answer:The
Brownian movement also called Brownian motion is defined as the uncontrolled or erratic movement of particles in a fluid due to their constant collision with other fast-moving molecules.

33. Find the concentration of solution in terms of weight percent if 20g of common salt is dissolved in 50 g of water.

Answer: Given that weight of salt (NaCl)= 20g

Answer: To calculate the number of moles in an atom, use the formula

Number of moles of atoms = Number of atoms / Avogadro’s number

(ii) Give one example each for a weak and a strong acid.

Answer: (i) A weak acid is only partially dissociated, and it has both the undissociated acid and its dissociation products present, in solution, in equilibrium with each other. For this reason, acid A is the weak acid, and acid B is the strong acid.

(ii) Acetic acid (CH 3COOH) is an example of a weak acid, while HCl is a strong acid.

Answer: (i) HCOOH is the odd man out as it is organic acid

(ii) Odd man out is Vinegar, as it is acidic in nature

37. Correct the mistakes, if any in the following statement.

(i) Second period is a short period. It contains only 2 elements

Answer: (i) Second period is a short period. It contains only 8 elements

The shortest period is the first period with only two elements.

Reason: It is due to the formation of a layer of basic copper carbonate

Answer: (a) Assertion and reason are correct and relevant to each other

39. An Organic Compound(A) is widely used as a preservative in pickle and has a molecular formula C2H4O2. This compound reacts with ethanol to form a sweet smelling compound (B).

(i) Identify the compounds A and B

(ii) Name the process and write the corresponding chemical equation

Answer: (i) The Organic compound (A) widely used as a preservative in a pickle is Vinegar- Acetic Acid(CH3COOH). When acetic acid reacts with ethanol in the presence of conc. H2SO4, it forms esters with a sweet smell.

So compound A would be Acetic Acid or Ethanoic Acid, while compound B is Ethyl Ethnoate or ester

(ii) When carboxylic acid and alcohol react, the product formed is known as an ester. Below is an example of the formation of an ester from the reaction of ethanoic acid with absolute ethanol in the presence of an acid as a catalyst.

40. Assertion (A) : MRI is used to scan the inner organs of the human body by penetrating a very intense magnetic field.

Reason(R): By use of a very intense magnetic field, very high resolution images can be obtained.

41. An object of mass 1 kg is dropped from a height of 20 m. It hits the ground and rebounds with the same speed. Find the change in momentum.

Hence, magnitude of change in momentum is 40 kg ms-1 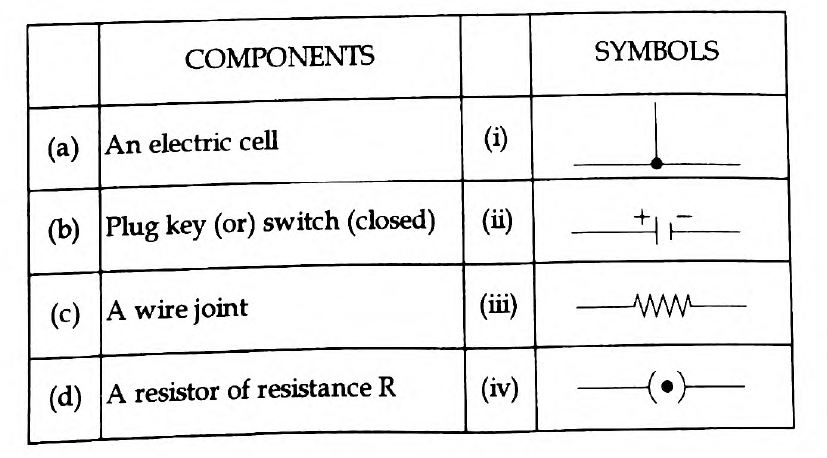 45. The ray diagram shown below is introduced to show how a concave mirror forms the image of an object: (b) When a ray, passing through focus strikes concave mirrors, the reflected ray will pass parallel to the principal axis.

Right-hand rule is explained below:

47. If an object placed 25 cm in front of the converging lens forms an image 20 cm behind the lens, then what is the focal length of the lens?

48. There is a widespread outbreak of malaria in your area.

Answer: (a) Some controlling measures to curb the widespread outbreak of malaria is given her:

(b) Some symptoms of malaria includes chills, shivering and a feverish feeling

49. Use the words from the given list to complete the following paragraph:

(1) Myelinated or Medullated or White neurons.

50. Describe the structure of a dicot seed with a neat diagram. Structure of a Dicotyledonous Seed

(b) What is the future products of Green Chemistry?

Answer: (a) Green Chemistry also referred to as Sustainable Chemistry is the branch of Chemistry that deals with the design and optimisation of processes and products in order to lower or remove altogether, the production and use of toxic substances. Green chemistry is not the same as environmental chemistry. The primary focus of the former is on the environmental impact of chemistry and the development of sustainable practices that are environment-friendly (such as a reduction in the consumption of non-renewable resources and strategies to control environmental pollution). Meanwhile, the latter focuses on the effects that certain toxic or hazardous chemicals have on the environment.

Answer: See the findings of the atomic theory from here.

53. Explain the manufacturing of Ethanol from molasses.

Answer: A dark syrupy liquid left after the crystallisation of sugar from the concentrated sugar cane juice is molasses. Molasses still contains sucrose, which is converted to ethanol. See the steps below:

(i) First step is Distillation. Molasses is distilled with water to cut down the concentration of sugar to 8% to 10%.

(ii) Secondly, add ammonium salts. Usually, molasses have enough nitrogenous matter that can act as food for yeast, during the fermentation process. However, if the nitrogen content in molasses is few, it can be fortified by adding ammonium phosphate or ammonium sulphate.

(iii). Now, add yeast. The solution from step (ii) is then collected in large ‘fermentation tanks’, and yeast is added to it. The mixture is kept at about 303K for a few days. During this period, the enzymes invertase and zymase present in yeast, cause the conversion of sucrose into ethanol.

Now, here the fermented liquid is technically known as wash.

(iv) The final step is the distillation of wash. The fermented liquid with 15% to 18% alcohol and the rest of the water, is now subjected to fractional distillation. The main fraction drawn is an aqueous solution of ethanol that contains 95.5% of ethanol and 4.5 % of water, called rectified spirit. The mixture is then heated under reflux over quicklime for about 5 to 6 hours and then allowed to stand for 12 hours. On distillation of this mixture, pure alcohol (100%) called absolute alcohol is obtained.

Answer: (a) Newton’s First Law of Motion states that a body remains in the state of rest or uniform motion in a straight line unless and until an external force acts on it. It is said that according to the first law, a qualitative definition is given to force. See the example to justify this:

Wearing a seat belt in a car while driving is an example of Newton’s 1st law of motion. If an accident occurs, or if brakes are applied to the car suddenly, the body will tend to continue its inertia and move forward, probably proving fatal. To prevent such accidents seat belts are used, which stops your body from moving forward in inertia, thus avoiding danger.

Meanwhile, Force acting on A (reaction), F2 = mass of A × acceleration on A

Now, according to Newton’s third law of motions F1 = – F2

55. State and explain the defects of vision. How can these defects be rectified?

Answer: Some defects of vision include myopia, hyperopia or hypermetropia and presbyopia. Learn about these defects and how to rectify them.