Presbyopia is often confused with hyperopia since the symptoms present themselves in the same way. Close objects appear blurred for the person with presbyopia.

Presbyopia is caused as part of the natural ageing process of the eye. The ciliary muscles lose their ideal functioning power over time and do not work effectively. Even the crystalline lens loses its flexibility over time (it starts hardening), thereby affecting it focusing power. Even if someone has never had any vision problems in their life, they may still very well be subject to the effects of presbyopia. It occurs between the ages of 40 – 60.

Just as in hyperopia, presbyopia can be treated with the use of simple eyeglasses with convex lenses (positive power). Contact lenses can also be used in such a situation. Although they are more convenient, sometimes cases of both myopia and presbyopia may exist. In such a case, it is better to use bi-focal lenses.

Bifocals have both a concave and convex surface that are part of their refractive design. The image below shows a bifocal design. 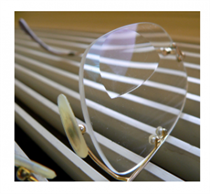 Progressive lenses are almost the same as bifocal lenses, and they work the same way. The only difference is that there is no visible line differentiating the separation between the concave and convex lenses. Here, the transition is smoother. It presents an added comfort factor.

Sometimes people with both defects opt for an option called monovision. They use contact lenses where one of the pairs corrects one defect, and the other lens corrects the other defect. This will work but may cause problems with effective perceptive. There are also modified monovision contact lenses that attempt to solve the problem of depth perception.

You now have a brief idea about eye defects. Learn about this in-depth with video modules only at BYJU’S. Also, register to “BYJU’S – The Learning App” for loads of interactive, engaging Physics-related videos and an unlimited academic assist.

Test Your Knowledge On What Is Presbyopia Eye Defects!
Q5