The Endocrine system is a powerful network of various glands. They have a great impact on other organ systems and their functions. The chemicals secreted by endocrine glands called hormones. Hormones can manipulate or change various cell activities in such a way that they can make us as tall as a tree and as short as a herb. Hence, hormone level needs to maintain at equilibrium.

Growth hormone secreted by the pituitary gland is responsible for dwarfism or shortness. When pituitary produces an insufficient amount of growth hormone, it retards the height of an individual.

Acromegaly is also known as gigantism. It is also a growth hormone-related disorder. In contrast to dwarfism, gigantism is the outcome of the excess secretion of growth hormone by the pituitary. 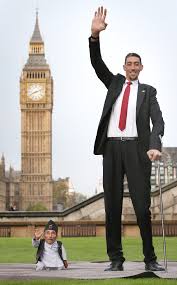 It is an endocrine disorder caused due to deficiency of thyroid hormones. Cretinism is a type of hypothyroidism that occurs in infants or kids. It leads to mental and physical growth impairment.

When the level of thyroid hormone is too high in blood, it shows symptoms like excess sweating, weight loss, etc. It also leads to the amplification (swelling) of the thyroid gland. This condition is known as goiter. It is either due to iodine deficiency or hyperthyroidism or hypothyroidism.

Also known as exophthalmic goiter- a type of hyperthyroidism. It is an autoimmune disorder which is commonly found in kids. In this condition, thyroid gland becomes overactive and secretes too much thyroid hormones.

The endocrine part of pancreas produces two hormones for the balancing blood glucose level; they are – glucagon and insulin. Diabetes mellitus, commonly known as diabetes is a condition in which blood glucose level is high due to insufficient secretion of insulin. Excessive thirst, weight loss, frequent urination are certain symptoms of the disease.

This is a condition which shows symptoms of extreme weakness and fatigue, dehydration, etc. Addison’s disease (adrenal insufficiency) is a hormonal disorder which explains the inefficiency of the adrenal cortex to produce its hormones like corticosteroids.

Here we had a glimpse of few endocrine disorders and conditions. For more details on endocrine glands download BYJU’S-The Learning app.