Frogs are carnivorous tailless amphibians which are widely found in India. A diverse variety of frogs can be found all over the world; among them, the Indian frogs are called Rana tigrina. They are vertebrates, coming under the class Amphibia (phylum Chordata). Frogs are cold-blooded animals (poikilotherms) whose body temperature varies according to their environment, hence, they need to protect themselves from extreme heat and cold for maintaining optimum body temperature. Thus, they follow aestivation and hibernation during the summer and winter seasons respectively. Another characteristic feature of frogs is that they camouflage i.e., they can change their skin colour according to their surroundings.

Though larvae have tails, adult frogs are tailless. An adult frog has a stout body which is differentiated into head and trunk. Other external features are a pair of nostrils, protruding eyes, a membranous tympanum (ear), slippery/warty moist skin and webbed limbs.

Frogs generally have a slippery moist and highly permeable skin through which they absorb water and respire. Thus, the moist skin acts as a respiratory organ in frogs. Also, the skin is glandular in nature, which produces mucus and toxic substances to warn them of their predators. The colour of the skin can vary from brown and green to vivid colours as per secretions.

The locomotion of frogs takes place with the help of their forelimbs and hind limbs. Frogs are unisexual i.e., they show sexual dimorphism. A male frog is distinguished from a female frog by the presence of vocal sacs and a copulatory pad on forelimbs. A female frog lacks these body features.

Below is an easy and well labelled diagram of frog (Rana tigrina) for your better understanding. 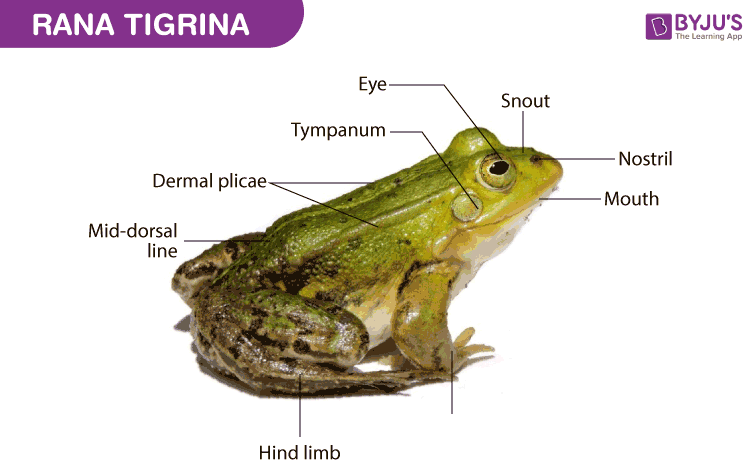 The body plan of frogs consists of well-developed structures which help them in their physiological activities. The body cavity accommodates all the organ systems such as digestive, respiratory, circulatory, excretory, nervous and reproductive systems, whose functions are almost similar to human body systems.

The alimentary canal together with the accessory organs makes up the digestive system of the frog. Since frogs are carnivorous they have short intestine. The alimentary canal begins at the mouth (buccal or oral cavity), passes through the pharynx, oesophagus or food pipe, stomach, small intestines, large intestines, rectum and finally ending at the cloaca. The food particles get digested gradually as they travel through various compartments of the alimentary canal. 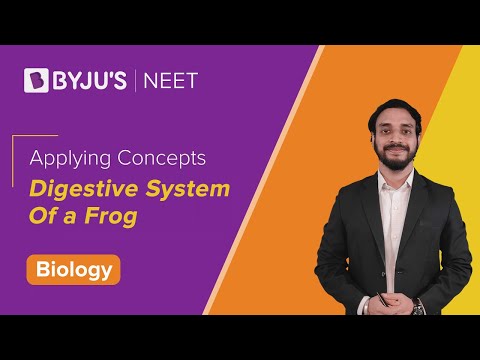 Frogs have a well-developed muscular heart with three chambers- two atria and one ventricle. Blood and lymph help in the transportation of food, air and other substances throughout the body via the network of blood vessels. The blood is composed of plasma and blood cells (RBC, WBC, and platelets).

The frog is a ureotelic animal whose major excretory product is urea. They have a distinguishable excretory system composed of a pair of kidneys, ureters, cloaca and urinary bladder. The kidneys have the structural unit called nephron which filters the blood and excretes out the waste.

The nervous system and the endocrine system together perform the control and coordination in frogs. The endocrine system is composed of the endocrine glands such as pituitary, thyroid, parathyroid, thymus, pineal body, pancreatic islets, adrenals, and gonads. The secretions of these glands called hormones are responsible for metamorphism and other regulatory functions.

The nervous system is divided into CNS and PNS. The brain is distinguished as forebrain, midbrain, and hindbrain which control different parts of the body. The brain is enclosed in the cranium and the vertebral column protects the spinal cord.

Both male and female frogs have their own reproductive system where gametes for reproduction are produced. Male frog has testes which produce sperms and eject it through the cloaca.  In a female frog, a pair of ovaries produce ovum and pass it to oviduct which opens into the cloaca. The cloaca is a common pathway for excretion and reproduction. At a time, 2500 to 3000 eggs are laid which are fertilized externally.

For video lessons on the frog – morphology, and anatomy, download BYJU’S-The Learning App.

Test your Knowledge on Frogs!
Q5