Mendel’s works on the principle of inheritance in genetics remained a mystery for quite some time. Even though his works were not accepted during his era, later it was rediscovered and gained credibility. Currently, Mendel’s work is fundamental for studying inheritance pattern in living organisms. In addition, it helped to discover and predict how genetic disorders function. Let’s learn about pedigree analysis with the help of a diagram and how it helps in predicting genetic disorders.

What is a Pedigree Analysis?

Pedigree analysis is a chart that represents a family tree, which displays the members of the family who are affected by a genetic trait.

In many cases, including various plant and animal species,  scientists use pedigree analysis to analyse the inheritance of phenotypes, or traits, using mating experiments called crosses.

Mendel’s experiments revealed that the ‘factors’, what we know as genes, are responsible for the inheritance of traits. They are also accountable for the disorders prevailing in living organisms. Genes are the hereditary unit of organisms, responsible for structural and functional changes in them. Besides this, it is the cause of variation in organisms which can either result in a good or bad trait. The conclusions we derived were on the basis of controlled crosses on pea plants and other organisms. These controlled experiments can’t be performed in the human population due to ethical concerns. The only suggested solution to this limitation was pedigree analysis. i.e., to observe and analyze the pattern of inheritance in humans using their family history.

DNA sequences are made up of various, which, in turn, code for a particular protein. Any changes in this sequence, e.g. mistakes during DNA replication may lead to a change in the genetic codes or chromosomal aberrations. This can be transferred from parents to offspring. Inheritance of altered genes causes genetic disorders in offspring. The Mendelian disorders may arise due to change or alteration in one gene. Their genetic inheritance is governed by Mendelian genetics. Mendelian disorders mostly occur in families with a certain pattern reflecting the alteration in a single gene. Prediction of these disorders is based on family history and can be done with the help of a family tree. This process of analysis of a number of generations of a family is called the pedigree analysis. Pedigree analysis is a strong tool in human genetics which helps to predict the pattern of inheritance, even when data is limited.

A family tree can be represented by a pedigree chart with all the members of a family. They may be having a genetic disorder or maybe carrier of the disease.  In the pedigree analysis, standard symbols are used to distinguish between different family.

Here is a diagrammatic representation of a pedigree chart. 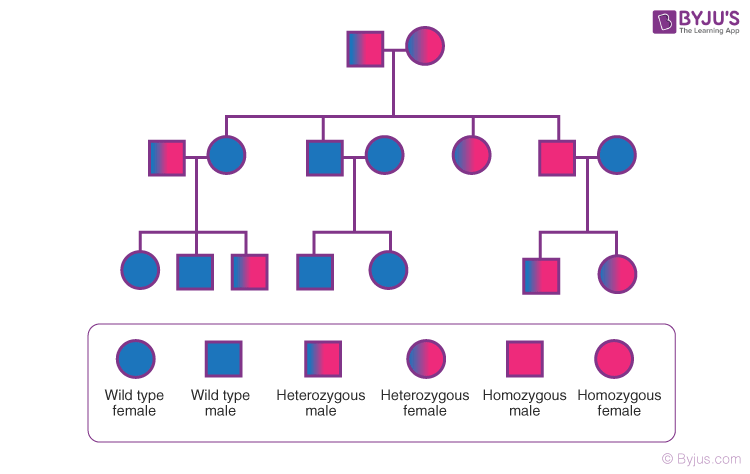 For more details on the Pedigree analysis or any other related topic, login to BYJU’S-The Learning App.

What do you mean by a pedigree chart?

A pedigree chart is a diagrammatic flow chart that is prepared to exhibit a person’s hereditary information in an easily readable form. The chart usually displays the members of the family who are affected by a particular genetic trait.

What are the main goals of a pedigree analysis?

Pedigree analysis is done to determine if the mode of inheritance is recessive, dominant, partial dominant, autosomal, mitochondrial or sex-linked. Moreover, it also determines the probability of an individual or offspring being affected in the given cross.