Phylum Platyhelminthes belongs to kingdom Animalia. This phylum includes 13,000 species. The organisms are also known as flatworms. These are acoelomates and they include many free-living and parasitic life forms.

Members of this phylum range in size from a single-celled organism to around 2-3 feet long.

Platyhelminthes have the following important characteristics:

Some of the characteristics that distinguish the organisms belonging to phylum Platyhelminthes from others are:

The classification of Platyhelminthes are given below:

A few organisms belonging to these species cause severe diseases such as Schistosomiasis, or snail fever. It is one of the most dangerous diseases in tropical countries. Taeniasis is another disease caused by Tapeworms. 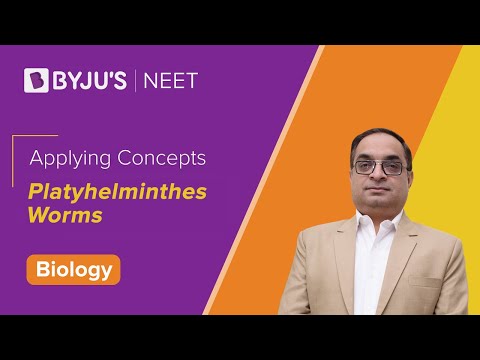 The examples of organisms belonging to phylum Platyhelminthes are:

These are found in freshwater ponds or slow streams. Their body possesses cilia and has the power of regenerating the lost part. The head bears a pair of eyes and two lateral lobes.

It is found in the mesenteric blood vessels and hepatic portal system of humans and is therefore known as blood fluke. It shows well-marked sexual dimorphism.

It is also known as liver fluke since it resides in the liver and bile duct of sheep and goat. It is a hermaphrodite but cross-fertilization takes place.

It causes fascioliasis in animals. In this, the liver of the animal enlarges and the bile ducts are blocked. The infection weakens the muscles of the animals resulting in muscular pain. It might also prove fatal for the animals.

It is also known as pork tapeworm and is found in all the countries where pork is consumed. They live as parasites in the small intestine of human beings and their larva are found in the muscles of the pigs. It is a hermaphrodite and undergoes self-fertilization.

There are other organisms such as Taenia saginata that is transferred through beef in the human intestines, and Echinococcus granulosus that lives in the intestine of cats and dogs