Renal Calculi, also called Kidney Stones, are a solid mass of crystals that block the urinary tract.  These crystals are primarily formed when calcium and oxalate coalesce. These stones originate in the kidney and exit through the urine system. 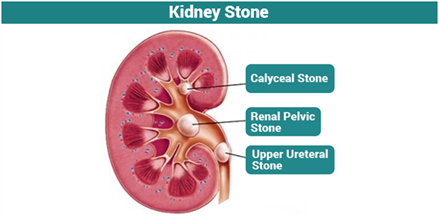 Most stones may not cause any sign and symptoms until it starts moving towards the uterus. Once the size of the stone exceeds more than 0.2 inches, one may experience severe pain in the abdomen or lower back as a result of a blocked ureter. Some have even stated that the pain is worse than that of childbirth

Signs and Symptoms of Renal Calculi

The signs and symptoms develop when a kidney stone passes into the ureter. Beneath are some symptoms of kidney stones.

Dehydration is one of the main factors in stone formation. High intake of animal protein (egg, chicken, meat) also increases the risk of kidney stone formation. When more animal proteins are consumed, it creates an acid load leading to high excretion of uric acid and calcium in turn, leading to the reduction of citric acid. Urinary excretion of other acidic metabolites and the formation of stone are by acidifying acids. Low urinary citrate promotes the formation of kidney stone.

It is not the only electrolyte that is responsible for the formation of stones, but also intakes of more vitamin D and calcium as a dietary supplement have a higher risk of developing kidney stones. For instance, high dietary sodium may increase by increasing urinary calcium excretion, thus increasing the risk of stone formation.

Prevention measures depend upon the type of stone formation. Rehydrating the body with drinking lots of fluid would help people having calcium stones. Some are stated below:

Allopurinol is one of the best treatments to reduce kidney stone recurrences. This drug can also be used with people having hyperuricemia or gout, calcium stones and hyperuricosuria.

1. What are kidney stones?

Kidney stones are solid masses of crystals that form in the urinary tract. These crystals are primarily formed when calcium and oxalate coalesce in the kidneys.

2. What are the signs and symptoms of renal calculi?

Common symptoms of kidney stones include:

To learn more about renal calculi and other kidney disorders, visit us at BYJU’S.