According to the RNA world hypothesis, ribonucleic acid is the first genetic material where all genetic information was stored and first life arose from it. It is a self-replicating molecule. In simple words, RNA is the precursor to the every life form that exists today on the earth. It is believed that modern cells arose from them and every essential process that occurs in living organisms evolved around RNA. RNA world hypothesis was widely accepted by the scientific community. 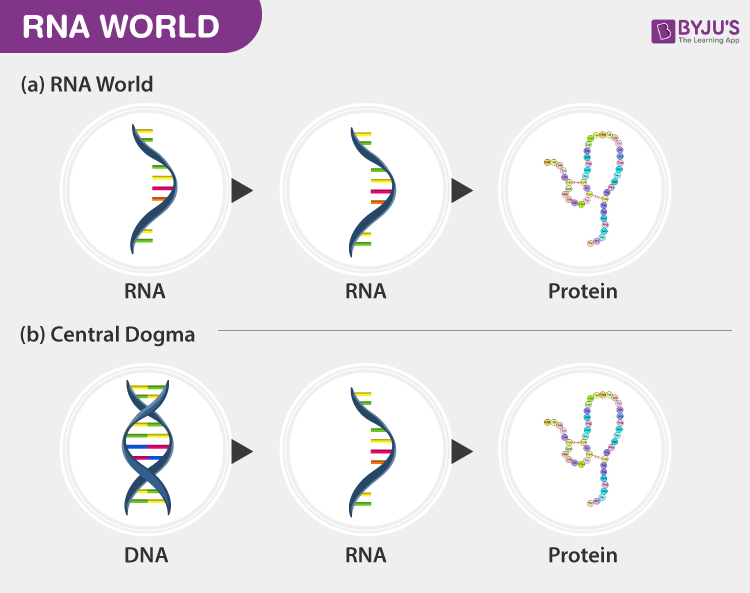 RNAs was also considered as a catalyst for certain biochemical reactions in the primitive cells. The presence of 2-OH group made them more reactive and thus a suitable biocatalyst. However, this reactive nature made them labile to degradation and hence unstable. This instability gave a wide scope of mutation required for evolution. But being a hereditary material it should have been stable both chemically and structurally.

Eventually, these unstable molecules have been replaced by more stable hereditary molecules. During this evolutionary period, DNA and protein molecules came into the picture. They replaced the role of RNA as the genetic material and structural component. RNA was a single-stranded hereditary molecule which stored and expressed genetic information. But their unstable and degrading nature led to the evolution of double-stranded DNA- genetic material which was more stable both chemically and structurally.

However, RNA is not completely eliminated. They still serve as genetic material in some organisms, and they catalyze few essential biochemical reactions in the cells. Also, the complex machinery of protein synthesis from DNA is still proceeding through RNA.

To learn more about the RNA World, visit BYJU’S.

Test your Knowledge on RNA World - The Genetic Material!
Q5