Congruence of triangles class 9 helps the students to understand the concept of congruence in a different perspective. It states that that two triangles are said to be congruent if they are copies of each other and when superposed, they cover each other exactly. In other words, two triangles are congruent if the sides and angles of one triangle are equal to the corresponding sides and angles of the other triangle. Congruence of triangles class 9 helps the students to learn about some of the axiom rules that every student should be needed to know for proceeding their higher studies.

Assume the triangle ABC and PQR

If a triangle PQR is congruent to a triangle ABC, we write it as ∆ PQR ≅ ∆ ABC.

Note that when ∆ PQR ≅ ∆ ABC, then sides of ∆ PQR fall on corresponding equal sides of ∆ ABC and so is the case for the angles.

This means that PQ covers AB, QR covers BC and RP covers CA;

Also, between the vertices, there is an existence of one-one correspondence.

The criteria for congruence of triangles class 9 is explained using two axiom rules.

Two triangles are said to be congruent if all the sides of a triangle are equal to all the corresponding sides of another triangle.

SAS Congruence Rule (Side – Angle – Side) 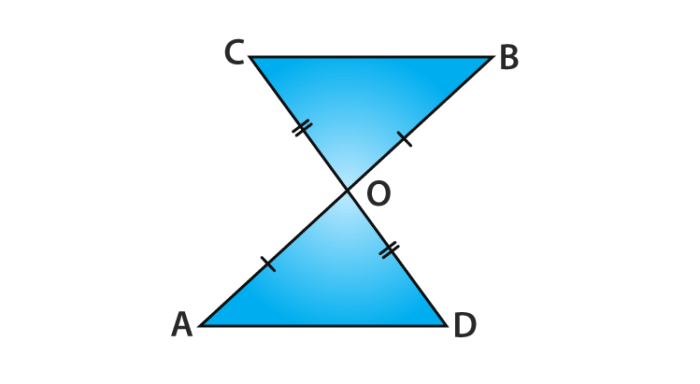 (i) You may note that in triangle AOD and triangle BOC,

Also, ∠AOD and ∠BOC form a pair of vertically opposite angles, we may write as

(ii) In congruent triangles, AOD and BOC, the corresponding parts of the triangle sides are also equal.

So, we get ∠ OAD = ∠ OBC and these conditions form a pair of alternate angles for line segments AD and BC.

Therefore, the sides AD || BC.

For More Information On SAS And ASA Congruency Rules, Watch The Below Video: 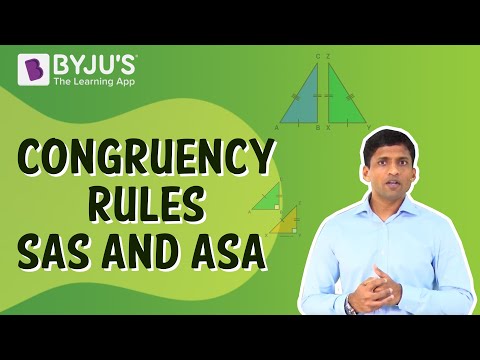 From the given two triangles, ABC and DEF in which:

For proving congruence of the two triangles, the three cases involved are

You will observe that

Case (ii): Let it possible the side AB > DE. Now take a point P on AB such that it becomes

IT is noted that in triangle PBC and triangle DEF,

So, we conclude that, from the SAS congruence axiom

But, we are provided with that

Is this condition possible?

repeating the arguments as given in Case (ii), we can conclude that AB = DE and so we get

Suppose now consider that in two triangles, two pairs of angles and one pair of corresponding

sides are equal but the side of a triangle is not included between the corresponding equal pairs of angles. Can you say that the triangles still congruent? Absolutely, You will notice that they are congruent. Because the sum of the three angles of a triangle is 180°. If two pairs of

angles are equal, the third pair of angles are also equal. It is called as AAS congruence rule when two triangles are congruent if any two pairs of angles and one pair of corresponding sides are equal. 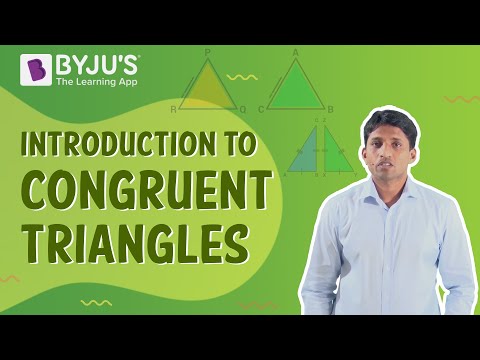 Line segment AB is parallel to the line-segment CD. From the given figure, O is the midpoint of AD. Show that (1) ∆AOB ≅ ∆DOC

(i) Consider a triangle AOB and triangle DOC.

It is observed that OB = OC

So, O is the midpoint of BC.

Visit BYJU’S – The Learning App for more information on congruence of triangles class 9 and other maths-related articles and also watch interactive videos to learn the concepts with ease.