The intercept of a line is the point at which it intersects either the x-axis or y-axis. If the axis is not specified, usually the y-axis is considered. It is normally denoted by the letter ‘b’.

Except that line is accurately vertical, it will constantly cross the y-axis somewhere, even if it is way off the top or bottom of the chart.

The equation of the line, which intersects the y-axis at a point is given by:
y = mx + c
Now, we have to write the intercept form of the line, we can replace c with b. Thus, the equation becomes:

y = mx + b
Hence, the formula for the intercept of a line is given by:
b = y – mx
Where, b is the intercept, m is the slope of the line and y and x indicate the points on y-axis and x-axis respectively.

Now, another way of writing the equation of the line, considering a line is intersecting the x-axis and y-axis at point a and b respectively.
x/a + y/b = 1
Here, a and b are the intercepts of the line which intersect the x-axis and y-axis, respectively. The values of a and b can be positive, negative or zero and explain the position of the points at which the line cuts both axes, relative to the origin.

How to Find X and Y Intercepts?

To find the x-intercept, substitute y = 0 and solve for x.

To find the y-intercept, substitute x =0 and solve for y.

Substitute y=0 in the given equation

Substitiute x =0 in the given equation

The formula of the line formed by the two points is given by: 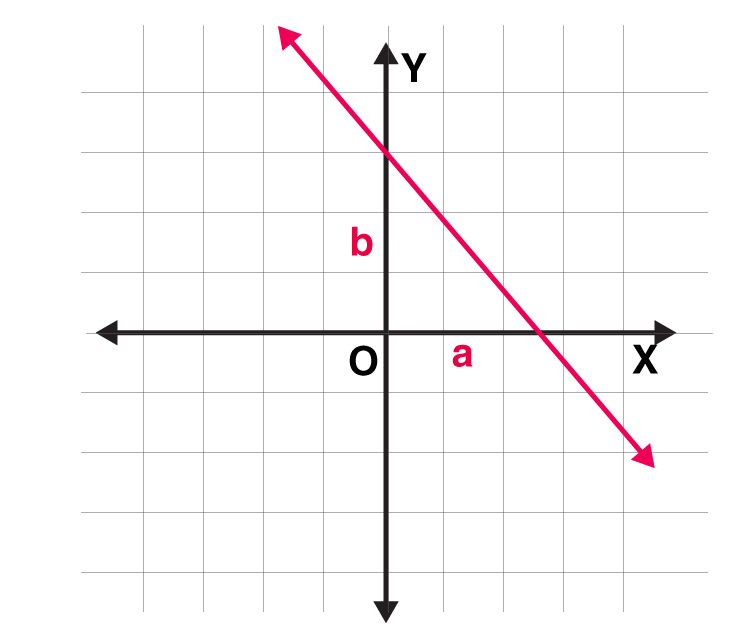 Let two intercepts P(2,0) and Q(0,3) intersect the x-axis and y-axis, respectively. Find the equation of the line.

From the equation of the line we know,

Therefore, putting the values of intercepts a and b, in equation 1, we get:

Stay tuned with BYJU’S – The Learning App and download the app to explore more videos.