What is a Point?

A point is a dot in a plane or a piece of paper. A point does not have any length, width or height. It determines the location or position in a plane.

There are different types of points in geometry, such as:

What is a Line?

A line is a straight path formed by connecting a set of points in a plane. It is a one-dimensional shape that has length but no width and height. A line extends infinitely in both the ends towards opposite directions. We can use upper case letters to denote a line. Also, a line can be marked with a single small letter, such as m, l, etc.

For example, AB is a line but we can also mark it as ‘m’.

The different types of lines can be categorized into: 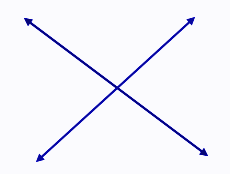 When two lines do not meet each other at any point, then they are called parallel lines. The example of parallel lines is a scale or a ruler that has its opposite edges parallel. Another example is the rail lines.

A Line Segment and A Ray

A line segment is a line that has two definite end points. If a line segment has two endpoints A and B, then it is denoted by AB bar.

A ray is a line that starts from a point and extends indefinitely in a direction. It has only one endpoint.

The example of a ray is a torch light that starts from an end and goes endlessly in one direction.

What is the point?

A point is a dot marked on a plane that represents the position.

What is a line?

A line is a series of points that are connected by a straight path and extend infinitely in the opposite directions.

What are points on the same line called?

The points on the same line are called collinear points.

How many points make a line?

We need at least two points to determine the line.

Do lines have endpoints?

Lines do not have endpoints. They extend endlessly in the opposite direction.

What are the properties of points?

A point has zero size. It is dimensionless. It does not have length, width and height.