Biodiversity in Plants and Animals

Biodiversity generally refers to diversity or variability of living organisms present on this planet earth and other species which have driven to extinction millions of years ago. The term Biodiversity is also referred to as the Biological diversity which mainly denotes the total number of different living species, living within a particular region including the microbes, plants, animals, and ecosystems such as coral reefs, forests, rainforests, deserts etc. Therefore, in biodiversity, every single living species has an equally important role in the ecosystem. The term biodiversity was coined by Walter G. Rosen in the year 1986. 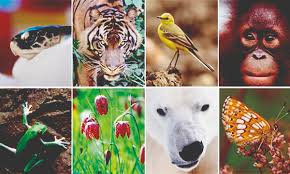 As we all know, the term Biodiversity refers to the measure of the variety of living species existing in different ecosystems and this may either refer to the ecosystem variation, or the genetic variation or the species variation within a region, biome or the planet.

Overall, the biodiversity on land tend to be the richest in the tropical region and greater near the equator, and it is mainly because of the warm climate and high primary productivity

Biodiversity can be studied at many levels. At the highest level, we study the different species existing on the entire Earth. On a much smaller scale, we study mainly about the different species within a pond or a neighbourhood garden. Discovering, identifying and understanding the various relationships between all the living organisms on the planet Earth are some of the greatest challenges in science.

The diversity of plants on the planet earth is an important resource for food, shelter, and agriculture. About thousands of plant crop species have been identified, developed, used and relied on for the purpose of food and agricultural production in human history. These plants include bushes, grasses, herbs, shrubs, trees, vines, ferns, and mosses. Through the process of photosynthesis, plants provide us with the oxygen which we breathe and the sugars that provide the primary fuel for life.

There is a great variation in the biodiversity, resulting from human and ecosystem interaction for certain food and development for the survival of the human population, regardless of the pests, climate fluctuations, diseases, droughts and other unexpected environmental events. Currently, there are only a few crop species which provide us with food and essential energy requirements for the total human population all around the world. These crops include rice, wheat, maize, cereals, pulses, etc. As per the requirement on this moderately small number of crops for global food security, it will be essential to maintain a continuity of these plants species along with the increasing environmental stress and to provide opportunities for the farmers to breed more amount of crops that can be cultivated under unfavourable conditions such as poor soil, salinity, drought, flooding, and extreme temperatures.

Similar to the plants, the biodiversity of animals is vast and there are several animal species which have been trained, domesticated and used for the food production, for the agriculture and are the primary biological capital for livestock development. This plays a vital role in food safety and also in maintaining rural development. Yet, its management has been terrible. There have been a lot of animals that have gone extinct over the past few years and this is a matter of great sorrow.

Therefore, the conservation of biodiversity of both plants and animals is the need of the hour.

Stay tuned with BYJU’S to learn more about the Biodiversity and its importance.