What are Bt Crops?

“Bt crops are transgenic crops that are genetically engineered from the DNA of bacterium Bacillus thuringiensis.”

Bt Crops are transgenic crops that produce the same toxin as the bacterium Bacillus thuringiensis in the plant cell, thereby, protecting the crops from pests. The bacterium secretes specific proteins known as “cry proteins” that are toxic to insects. A few of the Bt crops include cotton, brinjal, corn, etc.

When an insect feeds on the transgenic plants, the toxic cry protein present in the plants crystallizes the digestive system of insects, eventually leading to its death. However, it has no harmful effects on the human digestive system. 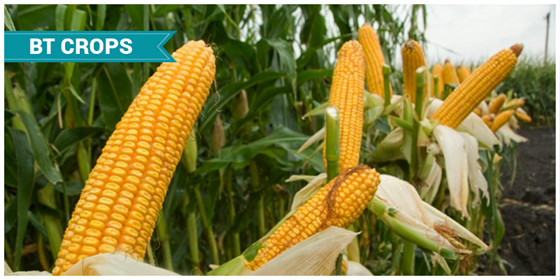 Bacillus thuringiensis is a gram-positive, spore-forming bacteria which is mainly found in the soil. As stated above, it produces proteins that are toxic to insects. Organic farmers use this bacterium in a solution and spray it on the plants to protect them from pests.

The practice of using Bacillus thuringiensis began in the year 1996 with small quantities of genes from the bacterium. This facilitated the production of cry proteins in plant cells that helped to kill pests. Pests like European and southwestern corn borer, tobacco and cotton budworm, pink bollworm and Colorado potato beetle largely destroyed the crop yields. Bacillus thuringiensis protected the crops against such pests.

The following types of Bt crops were produced by the researchers:

The Bt cotton variety is genetically transformed with the Bt gene to protect the plants from bollworm, a major pest of cotton. The worms present on the leaves of Bt cotton become lethargic and sleepy and thus, cause less damage to the plants. When the worms consume the plant, the toxic proteins produced by the crops are ingested, thereby, killing them.

Bt brinjal is also produced by genetic transformation of a crystal protein gene cry 1 Ac from the bacterium Bacillus thuringiensis. Bt brinjal was developed to provide resistance against lepidopteron insects. The proteins produced by Bt genes bind to the receptors present on the insect’s membrane, resulting in the formation of pores on the membranes. This disrupts the digestive process and leads to the death of the insect. 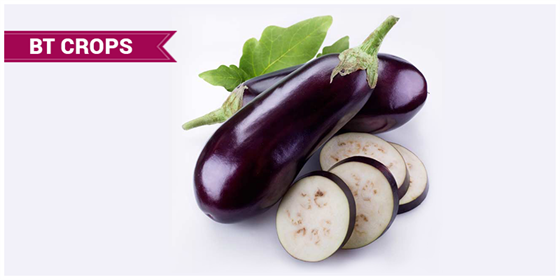 Following are the major advantages of Bt crops:

Bt crops have a few disadvantages as well:

Register with BYJU’S to learn more about Bt Crops, its types, advantages and disadvantages.

Which is the first transgenic plant?

The first transgenic plant was an antibiotic-resistant tobacco plant produced in 1982.

Why was Bt cotton created?

About ten years ago, a variety of transgenic cotton was created by transforming the Bt gene into the plant DNA that produces toxins to kill the caterpillar. The toxins released by the plant would paralyze the guts of the caterpillar, when they feed on the plants.

Give a few examples of Bt crops.