“Genetically modified organisms are those that have their DNA altered in some way through genetic engineering.”

What are Genetically Modified Organisms?

Genetically modified organisms ( GMOs ) are those in which DNA from the desired organism is inserted in the laboratory. These are also known as transgenic organisms.

GMOs are created in the laboratory using scientific methods like Recombinant DNA technology and Reproductive cloning.

In Recombinant DNA technology, one or more genes from an organism are inserted into the DNA of another organism. On the other hand, reproductive cloning involves the extraction of a mature somatic cell from the desired organism and is inserted into the egg of the target organism that has its own nucleus removed. 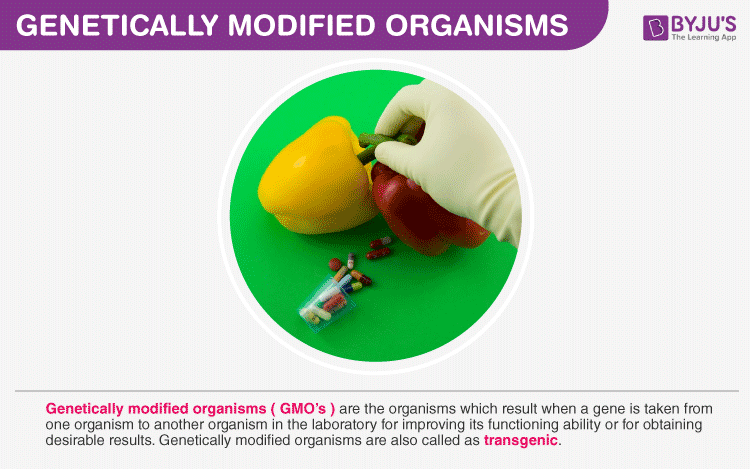 Genetically modified crops are the crops whose genes are modified using genetic engineering techniques. These are also called transgenic crops. The main goal of producing GMOs is to increase the yield of the crop and to produce disease-resistant crops.

An example of a genetically modified crop is Golden Rice. It was genetically modified to generate beta-carotene twenty times more than the previous varieties of rice. Golden rice is intended for Asia. One more rice variety was also created to fight iron deficiency. A gene from the bean plant is taken and inserted into the rice gene and the resultant rice helps to fight iron deficiency.

Another organism produced as a result of genetic engineering is Arabidopsis thaliana.

Genetically modified medicines have been a revolutionary idea. This helps to cure diseases like diabetes, hypertension, and also helps in treating certain genetic disorders.

Insulin is the first genetically modified medicine created by injecting a gene from the intestine of the pig into a bacterium. The bacterium with the gene grows and produces insulin.

Many other products like Aspartame, Remicade, Avastin etc. are the result of genetic engineering. Certain genetically engineered plants also produce edible vaccines which are used to prevent diseases.

Genetically modified organisms offer many potential benefits to the environment. It helps in reducing ecological damage. For instance, certain genetically engineered bacteria can produce biodegradable plastics. A bacterium called Ralstonia eutropha converts glucose and some other acids into a flexible polymer. This polymer is used for making plastic.