A technique mainly used to change the phenotype of an organism (host) when a genetically altered vector is introduced and integrated into the genome of the organism. So, basically, this process involves the introduction of a foreign piece of DNA structure into the genome which contains our gene of interest. This gene which is introduced is the recombinant gene and the technique is called the recombinant DNA technology.

There are multiple steps, tools and other specific procedure followed in the recombinant DNA  technology, which is used for producing artificial DNA to generate the desired product. Let’s understand each step more in detail.

What is Recombinant DNA Technology?

The recombinant DNA technology emerged with the discovery of restriction enzymes in the year 1968 by Swiss microbiologist Werner Arber,

Thus the recombinant DNA has to be introduced into the host. And at last, it has to be maintained in the host and carried forward to the offspring. 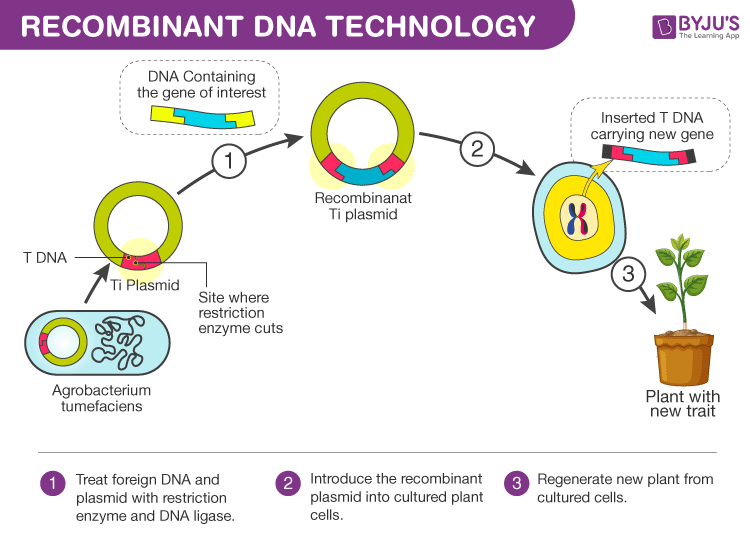 The Endonucleases cut within the DNA strand whereas the Exonucleases remove the nucleotides from the ends of the strands. The restriction endonucleases are sequence-specific which are usually palindrome sequences and cut the DNA at specific points. They scrutinize the length of DNA and make the cut at the specific site called the restriction site. This gives rise to sticky ends in the sequence. The desired genes and the vectors are cut by the same restriction enzymes to obtain the complementary sticky notes, thus making the work of the ligases easy to bind the desired gene to the vector.

The vectors – help in carrying and integrating the desired gene. These form a very important part of the tools of recombinant DNA technology as they are the ultimate vehicles that carry forward the desired gene into the host organism. Plasmids and bacteriophages are the most common vectors in recombinant DNA technology that are used as they have a very high copy number. The vectors are made up of an origin of replication- This is a sequence of nucleotide from where the replication starts, a selectable marker – constitute genes which show resistance to certain antibiotics like ampicillin; and cloning sites – the sites recognized by the restriction enzymes where desired DNAs are inserted.

Host organism – into which the recombinant DNA is introduced. The host is the ultimate tool of recombinant DNA technology which takes in the vector engineered with the desired DNA with the help of the enzymes.

There are a number of ways in which these recombinant DNAs are inserted into the host, namely – microinjection, biolistics or gene gun, alternate cooling and heating, use of calcium ions, etc.

The complete process of recombinant DNA technology includes multiple steps, maintained in a specific sequence to generate the desired product.

The first and the initial step in Recombinant DNA technology is to isolate the desired DNA in its pure form i.e. free from other macromolecules.

Step-2.Cutting the gene at the recognition sites.

The restriction enzymes play a major role in determining the location at which the desired gene is inserted into the vector genome. These reactions are called ‘restriction enzyme digestions’.

It is a process to amplify a single copy of DNA into thousands to millions of copies once the proper gene of interest has been cut using the restriction enzymes.

In this step of Ligation, joining of the two pieces – a cut fragment of DNA and the vector together with the help of the enzyme DNA ligase.

As mentioned in Tools of recombinant DNA technology, there are various ways in which this can be achieved. The effectively transformed cells/organisms carry forward the recombinant gene to the offspring.

A clone is a cluster of individual entities or cells that are descended from one progenitor. Clones are genetically identical as the cell simply replicates producing identical daughter cells every time. Scientists are able to generate multiple copies of a single fragment of DNA, a gene which can be used to create identical copies constituting a DNA clone. DNA cloning takes place through the insertion of DNA fragments into a tiny DNA molecule. This molecule is made to replicate within the living cell, for instance, a bacterium. The tiny replicating molecule is known as the carrier of the DNA vector

Yeast cells, viruses, Plasmids are the most commonly used vectors. Plasmids are the circular DNA molecules that are introduced from bacteria. They are not part of the main cellular genome. It carries genes, which provide the host cell with beneficial properties such as mating ability, drug resistance. They can be conveniently manipulated as they are small enough and they are capable of carrying extra DNA which is weaved into them.

Listed below are the applications of gene cloning:

Stay tuned with BYJU’S to learn more about the Recombinant DNA Technology, its tools, procedure and other related topics @  BYJU’S Biology