What is DNA Cloning?

“DNA cloning is a molecular biology technique which is used for the creation of exact copies or clones of a particular gene or DNA.”

DNA cloning is the process of making multiple copies of a particular segment of DNA. During this technique, the selected DNA fragment is inserted into a plasmid (the circular piece of DNA) using enzymes. Restriction enzymes and DNA ligase are used in the process.

The restriction enzymes are used to cut the DNA fragments at specific sequences and DNA ligase enzymes are used to join the nicks. The recombinant DNA thus produced is introduced into bacteria. These bacteria reproduce and produce an exact copy of the plasmid. These copies are known as clones. 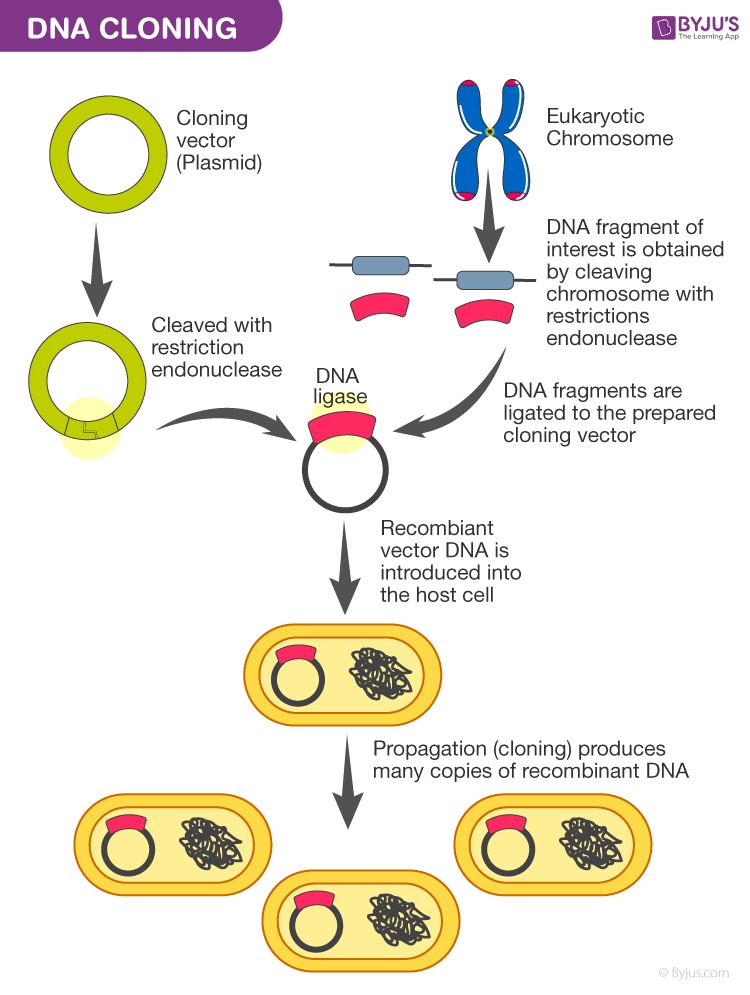 Two types of enzymes are used in this method:

The restriction enzymes cut the DNA at specific target sequences. The target gene is inserted into the cut site and is ligated by DNA ligase. This is known as a recombinant plasmid.

The recombinant plasmid is introduced into bacteria such as E.coli. The bacteria are subjected to very high temperatures which compel them to take up the DNA. This process is known as transformation. The plasmid contains an antibiotic resistance gene which helps them to survive in the presence of antibiotics. The plasmid containing bacteria are selected on a nutrient containing antibiotics. The transformed bacteria survive, while the ones without a plasmid die.

The DNA molecules produced through the cloning techniques are used for many purposes which include:

What is the purpose of DNA cloning?

DNA cloning is used to create a large number of copies of genes or a DNA segment.

Dolly, a female sheep, was the first mammal to be cloned from adult somatic cells by the process of nuclear transfer.

Name the first monkey that was cloned.

Tetra was the first rhesus macaque created by embryo splitting.

What all animals have been cloned?

Cat, deer, ox, mule, dog, rabbit and rat are the animals that have been cloned.