Biotechnology is a wide branch that involves the exploitation of living organisms using technologies to develop products that would sustain human welfare. Genetic engineering and bioprocess engineering are the two main techniques that have gives rise to modern biotechnology.

Given below are the important questions for biotechnology principles and processes class 12 along with the answers for reference.

Q.1. How is the copy number of plasmid vector and yield of the recombinant protein related to each other?

Q.2. Can exonuclease be used while producing a recombinant DNA molecule?

A.2. No, an exonuclease cannot be used while producing a recombinant DNA. This is because an exonuclease degrades the DNA. It cannot produce DNA fragments with sticky ends.

Q.3. What are the features of a plasmid being used as a cloning vector?

A.3. The characteristics of plasmids being used as a cloning vector are:

Q.4. What are competent cells? What does the word “competent” refer to?

A.4. Competent cells are those that allow the foreign DNA to incorporate into the host by a slight alteration in the cell walls. “Competent” means the ability of a cell to intake foreign DNA.

A.5. “Eco” refers to the species from which it is taken, “R” refers to the particular strain, and “I” states that it was the first enzyme isolated from this strain.

Q.6. Why are proteases added while isolating the DNA?

A.6. Proteases are added to degrade the proteins so that they do not interfere with the downstream DNA treatment.

Q.7. If the “denaturation” step is missed during PCR, what would be its effect on the entire process?

A.7. If the denaturation process is missed, there will no separation of DNA strands, the primers will not anneal to the template strands and eventually, amplification of DNA will not occur.

A.8. Hepatitis B vaccine is a recombinant vaccine.

Q.9. How is Ti plasmid of Agrobacterium tumefaciens modified to convert it into a cloning vector?

A.9. The Ti plasmid is a tumour-inducing plasmid. The genes responsible for its pathogenic nature are either removed or altered so that it does not harm the plants and only delivers the gene of interest.

Q.10. Do biomolecules such as DNA, proteins exhibit biological activity in anhydrous conditions?

A.10. No, biomolecules do not exhibit biological activity in anhydrous conditions. That is why life does not sustain without water.

Q.11. What is Biotechnology?

A.11. Biotechnology is defined as the broad area of biology which uses both the technology and the application of living organisms and their components to develop, modify and to produce a useful product for human welfare. The term ‘Biotechnology’ was coined in the year 1919 by an agricultural engineer Karoly Ereky, hence he is called as the father of Biotechnology.

Q.12. What is Genetic engineering?

A.12. Genetic engineering is the technique mainly used to change or to modify the genetic material (DNA/RNA), and to introduce them into other organisms.

Q.13.What are the  Principles of Biotechnology?

Q.14.How is Biotechnology useful in developing food crops and in agriculture process

A.14.Biotechnology extends its applications over a broad spectrum in the fields of agriculture and development of food crops.

In the agriculture field, it helps in improving food quality, quantity, and processing. Bio-fertilizers and Bio-pesticides are eco-friendly sources for agriculture, which contains the living microorganisms that help in promoting growth by increasing the supply or availability of primary nutrients. Farmers choose biotech crops to increase the yield and in lower production costs.

Q.15.What are the different types of biotechnology?

A15.The scope of Biotechnology has driven a need to classify Biotech based on some common features or their final purpose.

Below are some of the main areas of Biotechnology :

Q.1. What do you understand by gene cloning?

A.1. Gene cloning or DNA cloning is the process in which the gene of interest is copied out of the DNA extracted from an organism. The process of gene cloning is carried out in the following steps:

Isolation of DNA fragment or gene

Selection of the appropriate vector

The isolated DNA fragment is incorporated into the vector

The recombinant vector is transformed in the host cell

The recombinant host cell is isolated 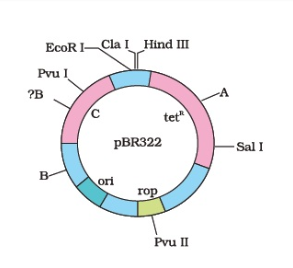 Q.3. Identify the steps A, B, C in the following diagram 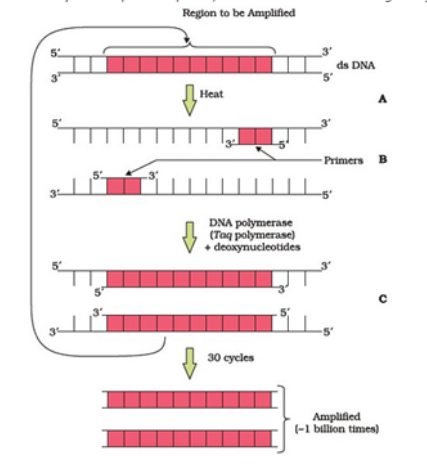 A- Denaturation– The DNA strands are treated with a temperature 94℃ and the strands are separated.

B- Annealing– The primers anneal to the complementary strands

C- Extension– The DNA polymerase facilitates the extension of the strands.

Q.4. A gene was being ligated to the plasmid vector to prepare a recombinant DNA during bacterial transformation. An exonuclease was added to the tube accidentally. How will it affect the next step of the experiment?

A.4. There will no effect on the experiment. This is because a recombinant DNA is circular and closed with no free ends. Therefore, the exonuclease will not degrade the DNA.

Q.5. What would happen if the restriction enzymes do not cut the DNA at specific recognition sequences?

A.5. If the restriction enzymes do not cut the DNA at the specific sites, the DNA fragment obtained will have no sticky ends, and hence, the construction of recombinant DNA would be difficult.

A.6. The DNA is stained with ethidium bromide which intercalates with the DNA strands and gives orange bands on exposure to ultra-violet light. Thus, one can view the DNA on an agarose gel.

Q.7. What would happen if a plasmid without a selectable marker was chosen as a cloning vector?

A.7. A selectable marker helps to distinguish transformed cells from the non-transformed ones. If the cloning vector does not have a selectable, marker, it would be difficult to select the transformants.

Q.8. How are competent cells prepared by the action of CaCl2?

A.8. The divalent calcium ions create pores in the cell wall of the bacteria and facilitate the uptake of foreign DNA by the bacterial cell.

Q.10. A mixture of the fragmented DNA was run on an agarose gel. The gel was stained with ethidium bromide but no bands were observed. What would be the cause?

A.10. This may be due to the following reasons:

Q.1. What is the role of Agrobacterium tumefaciens in plant transformation?

A.1. Agrobacterium tumefaciens is a plant pathogen that infects crops such as tomato, sunflower, cotton, soybean, etc. It causes crown gall disease in plants which are induced by Ti plasmid or the tumour-inducing plasmid. The Ti plasmid incorporates a DNA segment called the T-DNA into the DNA of the host plant cell. This T-DNA causes tumours.

Q.2. What is a bioreactor? Explain different types of bioreactors.

A.2. The bioreactor is a large vessel used to carry out a biological reaction and to culture aerobic cells for conducting cellular or enzymatic immobilizations. The different types of bioreactors are:

Q.3. What is a polymerase chain reaction? What are the steps involved? Mention its applications.

A.3. The polymerase chain reaction is the process used in molecular biology to obtain several copies of a specific segment of DNA.

The following steps are involved in the process:

PCR has its applications in the following fields:

Q.4. What are the properties of a good vector?

A.4. A good vector must possess the following properties:

Q.5. Mention any three vector-less methods that are used to introduce recombinant DNA into a competent host cell.

A.5. The three vector-less methods include:

For more information on important questions on Biotechnology Principles and Processes class 12 or other Biology related topics keep visiting BYJU’S website. You can also refer to the BYJU’S app for further reference.