PCR or Polymerase Chain Reaction is a technique used in molecular biology to create several copies of a certain DNA segment. This technique was developed in 1983 by Kary Mullis, an American biochemist. PCR has made it possible to generate millions of copies of a small segment of DNA. This tool is commonly used in the molecular biology and biotechnology labs.

The PCR technique is based on the enzymatic replication of DNA. In PCR, a short segment of DNA is amplified using primer mediated enzymes. DNA Polymerase synthesises new strands of DNA complementary to the template DNA. The DNA polymerase can add a nucleotide to the pre-existing 3’-OH group only. Therefore, a primer is required. Thus, more nucleotides are added to the 3’ prime end of the DNA polymerase.

Components Of PCR constitutes the following:

PCR is of the following types:

This was designed to improve sensitivity and specificity. They reduce the non-specific binding of products due to the amplification of unexpected primer binding sites.

This is used for the amplification of multiple targets in a single PCR experiment. It amplifies many different DNA sequences simultaneously.

It uses the DNA amplification linearity to detect, characterize and quantify a known sequence in a sample.

It is a DNA fingerprinting technique based on PCR. It uses primers the DNA sequence of which is chosen arbitrarily.

Denaturation occurs when the reaction mixture is heated to 94℃ for about 0.5 to 2 minutes. This breaks the hydrogen bonds between the two strands of DNA and converts it into a single-stranded DNA.

The single strands now act as a template for the production of new strands of DNA. The temperature should be provided for a longer time to ensure the separation of the two strands.

The reaction temperature is lowered to 54-60℃ for around 20-40 seconds. Here, the primers bind to their complementary sequences on the template DNA.

Primers are single-strand sequences of DNA or RNA around 20 to 30 bases in length.

They serve as the starting point for the synthesis of DNA.

The two separated strands run in the opposite direction and consequently there are two primers- a forward primer and a reverse primer. 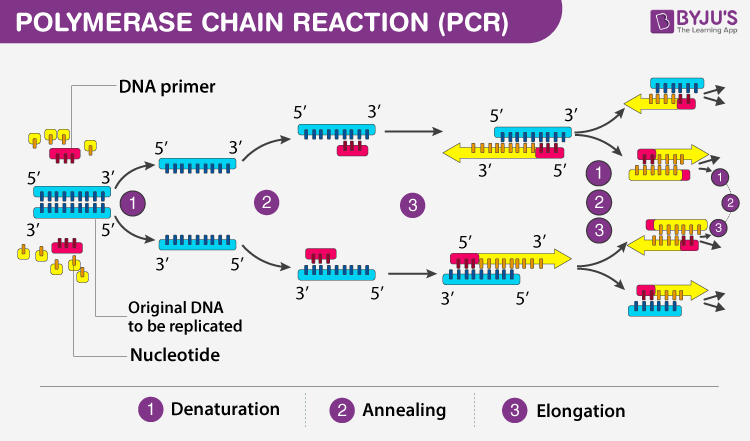 At this step, the temperature is raised to 72-80℃. The bases are added to the 3’ end of the primer by the Taq polymerase enzyme.

This elongates the DNA in the 5’ to 3’ direction. The DNA polymerase adds about 1000bp/minute under optimum conditions.

Taq Polymerase can tolerate very high temperatures. It attaches to the primer and adds DNA bases to the single strand. As a result, a double-stranded DNA molecule is obtained.

These three steps are repeated 20-40 times in order to obtain a number of sequences of DNA of interest in a very short time period.

The following are the applications of PCR :

For more information on Polymerase Chain Reaction or any other related topic, please visit BYJU’S.

Q.2. What is the importance of PCR?

A.2. PCR is important because it can generate several copies of a DNA sequence in a very short time period. It is also important in forensic science as a tool for genetic engineering. It helps in analyzing the gene expression.

Q.3. What are the advantages of PCR?

A.3. PCR is so sensitive that the DNA present in an individual cell can be isolated and amplified. This process is faster and less tedious than the traditional methods of gene cloning.

Test your knowledge on Pcr
Q5