Ecology provides a holistic perspective to biology where diversity plays a key role. The basis of biological understanding is to understand how entities while living as individuals, interact with their physical surroundings and other species in a geographical location thereby contributing to an organized structure on the whole which are – individual, population, community, ecosystem and ultimately the biosphere. Physical factors such as temperature, light, soil and water are the most important factors to which entities get adapted in various ways. Evolutionary changes are observed at the population level which plays an integral area in ecology. Q.1. Name the species that can withstand a close range of temperature

Q.2. What are Eurytherimic organisms?

A.2. These are organisms that exhibit a wide range of temperature tolerance.

Q.3. What do we call species that can endure a wide extent of salinity?

Q.4. The interaction between two species is known as?

Q.5. What are stenohaline species?

A.5. These species exhibit a narrow range of salinity tolerance.

A.6. It is a type of interaction where one species is benefitted while the other remains unaffected.

Q.7. Mention the relationship where a species generates poisonous particles which harm other species.

A.8. It is a symbiotic interaction between the root of higher plants and a fungus which gets its nourishment from its symbiont which in turn assists in the absorption process of higher plants.

Q.9. Name the emergent land plants that can sustain the salinities of the sea.

Q.10. Higher or raised altitude areas have blazing sunlight and lower temperatures as opposed to the plains. Why?
A.10. It is because of being less distant from particle free air and the sun. Likewise, lower atmospheric pressure causes low temperatures which are increased in plains.

A.11. Maintaining a constant internal temperature despite differing external environmental state is known as homeostasis.

A.12. To avoid excessive desiccation and heat in the summer, some organisms switch to a behavioural adjustment which causes them to slow down their metabolic activities. It is known as aestivation or the summer sleep.

Q.13. Define diapause. What is its significance?

A.13. Diapause is a phase of pendulous growth that is adopted by certain entities in ponds and lakes to sustain and survive unfriendly conditions.

Q.14. How would the growth rate pattern be affected by infinite resources?

A.14. It would be exponential.

Q.16. Describe high altitude sickness. What are its symptoms?

A.16. It is caused when people visit high altitude regions, which has less oxygen concentration to which he reacts by showing symptoms like headache, nausea, palpitations etc.

A.17. Barnacle growing on the back of a blue whale is an example.

Q.18. Explain with suitable examples of ectoparasites and endoparasites.

A.18. Ectoparasites nourish on the external surface of the host entities. For example, Ticks on dogs whereas endoparasites dwell in the body of the host at various locations such as lungs, kidney etc, for example, gut parasites such as tapeworm.

Q.19. Explain about brood parasitism with an example.

A.19. It is when parasites lay eggs on the nest of the host. For example, The Cuckoo lays its eggs in the host cell.

Q.20. Why do plants in arid regions have sunken stomata?

A.20. Sunken stomata minimize water loss by transpiration. That is why, plants in arid regions have sunken stomata.

Q.1. Why coral reefs are found on the eastern coast of India and Tamil Nadu and not found in Andra Pradesh and West Bengal?

A.1. Conditions such as optimal temperatures, with less siltation condition and high salinity favour the growth of coral reefs.

Q.2. Will a fish replaced from a freshwater source to an aquarium with sea water be able to survive? Give reasons.

A.2. No, as the body is adapted to survive in a close range of salinity and cannot survive in high salinity of seawater.

Q.3. Why do marine entities lack contractile vacuoles as compared to freshwater entities?

Q.4. What are heliophytes and sciophytes? Give an example for each.

A.4. Heliophytes are the plants that grow well in bright sunlight whereas plants that require the low intensity of light are sciophytes or shade loving plants.

A.5. It is because all colours of the apparent segments of the spectrum of light do not seep in the depths of water.

Q.7. List the unit of the density of population in a habitat per unit area.

Q.8. I) Label the three different tiers in the given age pyramid.

II) Mention the kind of population growth described by the pyramid.

Q.9. Name the kind of interaction built by a termite feeding on wood and the other is a protozoan Trichonympha residing in the gut of the termite.

A.9. The termite nourishes and accommodates for the Trichonympha to exist. It is present in the gut and digests the wood ingested by the termite. The termite dies if the protozoan is absent as it would be unable for the termite to digest it. Hence it is mutualism.

Q.10. List the scientific names of 2 microbes harbouring in the human intestine.

A.10. Lactobacillus and Escherichia Coli.

A.11. It is the point of the habitat where trees are fit for growing. Due to various environmental conditions such as higher altitudes, colder temperatures or deficiency of moisture, trees are not found beyond this line, even if found, display stunted growth.

Q.12. What is a zero population growth rate?

(i) Which figure displays mutualism?

(iii) What is the association and entity in figure C

(iv) State the role of the insect in B? 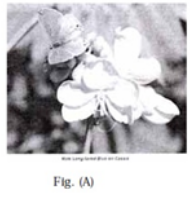 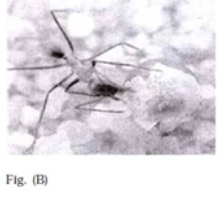 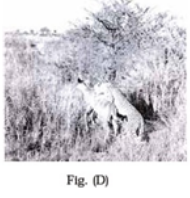 A.15. (i) The interaction between the plant and the pollinator insect is termed as mutualism. (ii) Predation (iii) Commensalism – Grazing cattle. (iv) The insect is being a scavenger.

Q.16. What is the difference between ectotherms and endotherms?

A.16. The difference between ectotherms and endotherms is as follows:

Q.1. List and define the characteristics of an individual and population.

A.1. Following are the characteristics:

The dispersion or intra-distribution patterns is referred to as the process of division of individuals of the population within boundaries of the geography. Due to emigration or immigration, an individual tends to get dispersed at some point in their life in a population. Emigration is when a group of individuals in a population switch to another habitat during a particular period of time. Immigration, on the other hand, is the totality of same species that have entered a habitat from elsewhere during a particular interval of time. Biotic potential, under ideal environmental conditions, is the inherent potential of a population to increase in its size. In a reproducing population, the gene pool is referred to as, all the genotypes of all individuals.

Q.2. Observe the age pyramids of different populations given below and write about the status of the populations. 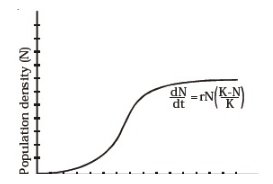 A.3. It is a logistic growth curve which is presumed to be more realistic as an ecosystem does not provide infinite resources in a habitat (‘r’ denotes carrying capacity). Here ‘N’ represents population density i.e., the number of species of a population per unit area is for the expected increase of intrinsic rate.

A.4. Following are the three types of interspecific interactions:

Few examples of beneficial interaction are Mutualism, Commensalism, scavenging, protocooperation. In mutualism, both the species interacting are benefitted. For instance, Lichens serve as mutualism between a fungus and cyanobacteria. The relation between roots of higher plants and fungi is represented by mycorrhizae, these fungi aid in the absorption of necessary nutrients from the soil for the plants, while the plants provide fungi with energy-yielding carbohydrates. Plants provide nutrient-rich food to animals which help in the pollination and dispersal of seeds. In commensalism, one species is benefited without affecting the other, for instance, Orchid grows on a mango branch as an epiphyte, Barnacles grow on the back of the whale. Scavenging is when scavengers feed. Few scavengers are- fungi, bacteria on the dead remains of animals. In protocooperation, both the species involved are benefited mutually, these species can live independent of each other.

Q.5. Explain the adaptations of the animal parasites while living in and on the host species with suitable examples.

A.5. Listed below are the adaptations:

The lack of unwanted sense organs as seen in mites, fleas and lice. (Absence of wings)

The absence of digestive system as seen in tapeworm.

Q.6. Name the element that causes salinity in the soil. Explain the state at which soil turns saline.

Improper irrigation procedures from a salt-laden water table cause salt concentration to increase. Due to evaporation, this gets stored.

Fertilization of crop. Fertilizers contain potassium which forms a salt-sylvite that occurs naturally.

This salinity degenerates vegetation and the soil. The normal pH value ranges from 2.2-9.7, anything above this range causes the soil to get deteriorated by the salinity.

Q.7. Is the distribution of organisms affected by light? Explain briefly with suitable examples of animals or plants.

A.7. For photosynthesis, plants require sunlight. Hence light affects the plant distribution. Example: Many shrubs and herbs grow in forests vegetation and are adapted to undertake photosynthesis under low light states, hence they are observed in shady areas under canopied, tall trees. Areas having adequate sunlight generally have big sized trees. To procure maximum sunlight, several plants grow vertically. These can be characterized by the presence of small leaves compared to the same species of the same age with better exposure to sunlight. Stay tuned for more interesting concepts on biology. For more on Organisms and population, please register at BYJU’S.