“Population interaction is the interaction between different populations. It refers to the effects that the organisms in a community have on one another.” 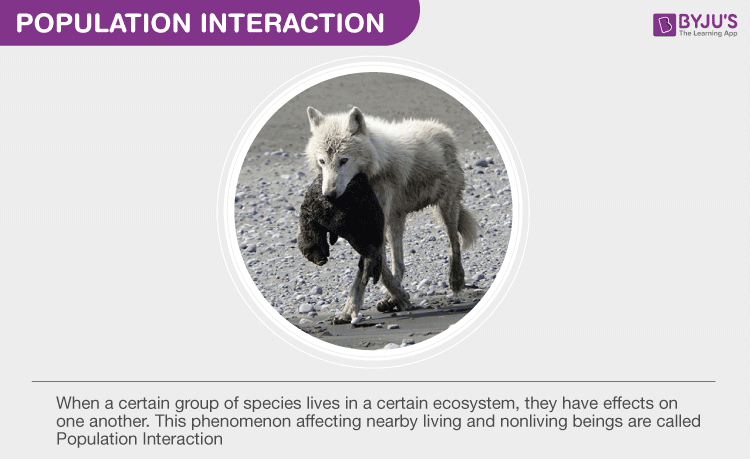 Ecology is a vast arena in Biology, which is a study of organisms, their distribution and interaction with each other and the environment. To study the relationship between prey, predators, other interactions and phenomenon like competition, camouflage, mimicry etc., it is mandatory to study the theory of population interaction.

Let’s discuss each of the modes of population interaction in detail.

Population Interaction in the Ecosystem

The environment consists of both abiotic (physical) and biotic (biological) factors. Nutrients in the soil, carbon dioxide, water, temperature, atmospheric pressure, wind and osmotic balances are some of the physical aspects required for a living being.

Along with these abiotic factors of the ecosystem, the population can be very much affected by their interactions.

Following are the main modes of interaction between populations.

As the name suggests, it is a relationship when two or more species compete for the same limited resources at the same time, which may be food, water, light, or any prey. All these things are crucial for any organism’s growth and survival.

This is a relationship where one species depends entirely on the other for its food and survival. The species which feeds on other species is called predator whereas the one that is fed upon is called the prey. This entire relationship is called Predation.

Predator is usually stronger than the prey, and hence it consumes preys during its entire life cycle. In some food chains and food webs, a predator can also fall prey as all living organisms develop a kind of defense mechanisms after a certain period of time.

The words ‘predator’ and ‘prey’  are not always limited to animals. They are implied on the relationship between animals and plants as well. For example – rabbit feeding on carrot, bear eating berry and grasshopper and leaf.

Camouflage literally means ‘to disguise’. It is the phenomena where an organism or a species develops structural adaptation that helps them to blend with their surroundings is known as camouflage. This helps them avoid getting detected by predators.

It is a Greek term which means “living together.” In various relationships among two or more species or organisms, both the parties depend on each other for food and survival. It is a relationship where one organism lives on another with mutual stereotypic behaviour.

There are three types of Symbiosis:

This is a type of ecological interaction where one organism is benefitted from the other organism without harming or benefitting it. For eg., cattle egrets and livestock, birds following army ants, barnacles and whales, etc. all exhibit commensalism.