Mutual relationship is seen in all living organisms including human beings, animals, birds, plants and other microorganisms like bacteria, virus, and fungi. Mutualism is a sort of symbiosis.

Mutualism is a type of relationship between the host and a symbiont, where both organisms benefit and no one is harmed. This relationship may either continue for longer or for shorter-term. The term mutualist is used to indicate the small partner and the host are the other partners present in the Mutualism.

For example, Ants live and feed on the nectar of acacia trees. Here ants are the mutualist and acacia trees is the host. 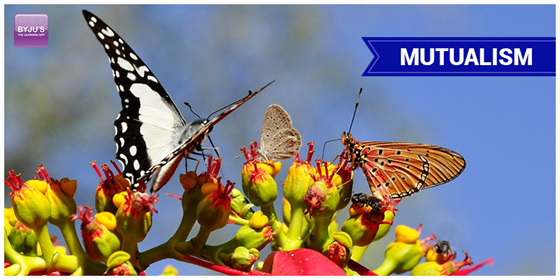 There are five types of Mutualism.

For example Yucca plant and the moth.

The yucca plant, the habitat of the dry and arid climate of the southwestern United States. The flower of the yucca plant relies on the moth for the pollination process. In turn, the moth is benefited by laying its eggs on the flower and feeding the larvae with the seeds.

In facul­tative mutualism, the partners may coexist without a depending on each other. They, how­ever, form a diffuse relationship involving a varying mixture of species.

For example Honeybees and plants.

Honey bees visit many different plants species for the nectar from the flower and these plants will be visited by the number of the insect as pollinators for pollination.

In trophic mutualism, the partners are specialized in complemen­tary ways to obtain energy and nutrients from each other.

For example The cows and the bacteria.

Cows cannot digest the plant’s cellulose. The bacteria present in the rumens of cows helps in digesting plants cellulose. In reverse bacteria gets food and warm environment, which is required for their growth and development.

In defensive mutualism, one partner receives food and shelter and in return, it helps the partner by defending against the herbivores or predators or parasites.

For example The aphids and the ants.

The aphids produce honeydew to the ants, which is carried to their nests at night for protecting them from the predators and escort. These aphids are carried back to the plant the next morning. In return, ants are benefited by assembling the aphid’s eggs and storing in their nest chambers to survive the cold winter months.

In dispersive mutualism, one partner receives food in return for helping flower in transferring their pollen.

For example Honeybees and the Plants.

Honey bees travel from one flower to another in search of nectar from the flower which is required to prepare honey, in return plants are benefited by the pollination as the honey bee spread the pollen from one plant to another.

Following are the important examples of mutualism:

The bird oxpecker lives on the rhino and removes all bugs and parasites on the animal skin by eating them. The Rhino provides the bird with food and in return, the bugs removed from the skin of the rhino. Both rhino and the oxpecker is benefited.

To learn more about mutualism, its types and examples, keep visiting BYJU’S or download BYJU’S app for further reference.

Test your Knowledge on Mutualism!
Q5