“Saprophytes are organisms that feed on dead and decaying organisms.”

Saprophytes are the living organisms that live and feed on dead and decaying organisms. They are considered extremely important in soil biology. They break down the complex organic matter into simpler substances that are taken up by the plants for various metabolic activities. Thus, saprophytes play a significant role in the ecosystem. Fungi and a few bacteria are saprophytes.

The saprophytes secrete digestive juices and breakdown the organic matter around them. The fungi grow tubular structures known as hyphae that branch into the dead matter and produce digestive enzymes.

Saprophytes undergo extracellular digestion to digest the dead and decaying matter. They secrete digestive substances into the surrounding environment and break down the organic matter into simpler substances. The nutrients thus produced are absorbed directly through the cell membranes of the organisms.

In saprophytic nutrition, the proteins are digested into amino acids, starch is broken down into simple sugars, and fats are broken down into glycerol and fatty acids. These end products are transported through the cell membranes.

Following are a few examples of saprophytes:

Mucor, also known as mould, is a saprophytic fungus that grows on decayed organic matter, especially those that are rich in carbohydrates. Mucor is majorly found on stale bread, vegetables and dung. It reproduces by sexual and asexual means.

Yeast is commonly found on sugary substances. It is present in grape juice, flower nectar, and vineyards, in large amounts. It reproduces by budding under favourable conditions.

Penicillium grows on the decayed matter such as bread, jam, jellies, fruits, vegetables and also on damp leather and shoes.

Saprophytes are decomposers since they feed on the dead and decaying matter. Suitable conditions are required for the optimum growth of saprophytes. If they have access to sufficient water, they grow well. Saprophytes do not thrive under alkaline conditions. They grow well in neutral or slightly acidic soil. There must usually be oxygen present as the majority of saprophytes cannot grow under anaerobic conditions.

Explore more about Saprophytes,  its features, economic importance, and other related topics  at BYJU’S Biology 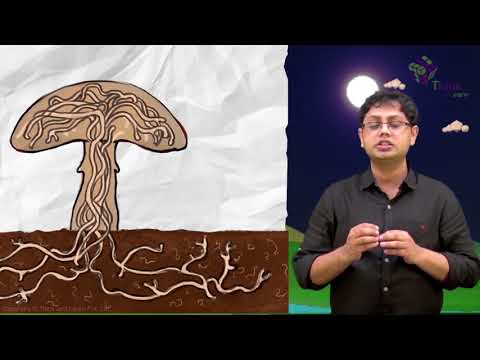 What is the role of saprophytes?

Saprophytes break down the dead and decaying organic matter into simpler substances that can be taken up and recycled by the plants. Thus they play an important role in maintaining the ecological balance.

Where do saprophytes live?

Saprophytes live on decaying vegetation such as leaves, sticks and logs. They can be found throughout the environment.

How do saprophytes grow?

Saprophytes have tubular structures called hyphae that branch into the dead matter and produce digestive enzymes to break down complex matter into simpler ones. These simpler substances are absorbed by the hyphae that grow into mycelium within some time.

Test your Knowledge on Saprophytes !
Q5