“Decomposition is the process by which the complex organic substances breakdown into simpler substances by the action of microorganisms.” 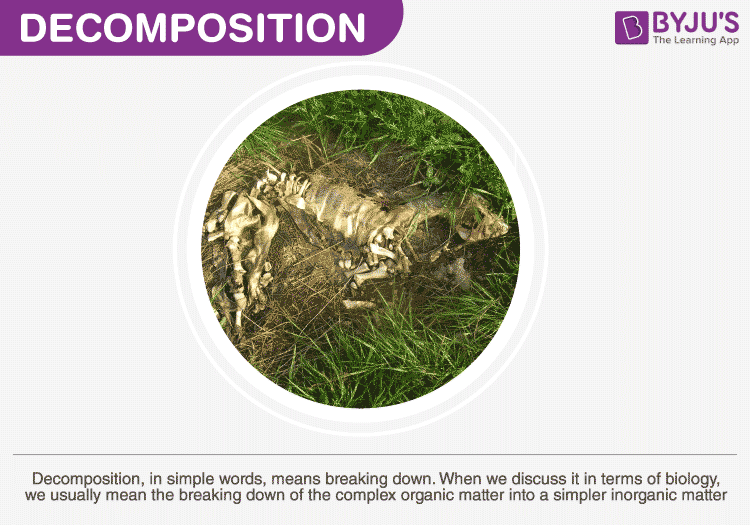 The term decomposition means “to break down”. It typically corresponds to the disintegration or rupture of complex organic matter into a simpler inorganic matter. It is one of the significant and essential processes of the ecosystem. Hence, decomposition is a metabolic process, taking up raw materials in the form of complex compounds, processing it and then converting it into simpler compounds.

Bacteria, fungi and a few other microorganisms initiate the process of decomposition and are known as decomposers. They feed on dead organisms to survive.

The decaying and dead animals and plants serve as the raw materials which, on the breakdown, produces nutrients, carbon dioxide, and water, etc. Detritus are the raw materials such as dead animals, plants and their remains. Microbes then process this detritus which are collectively known as saprophytes.

Let us know more in detail about its process and the major factors affecting the process of decomposition.

Following are the important factors affecting the rate of decomposition:

The rate of decomposition depends on the structural and chemical properties of litter. For eg., the litter of bryophytes are decomposed at a slower rate due to the presence of lignin like complex chemicals.

Temperature regulates the growth and activity of microorganisms. The temperature is different at different elevations. The species diversity and the microorganism count is affected by environmental changes.

The presence of cations and anions governs the pH of the soil, which in turn affects microbial growth.

After decomposition, the elements like potassium, sodium, calcium, magnesium are released into the soil. Some of these are used by the microorganisms for their growth. Thus, it affects the rate of decomposition. 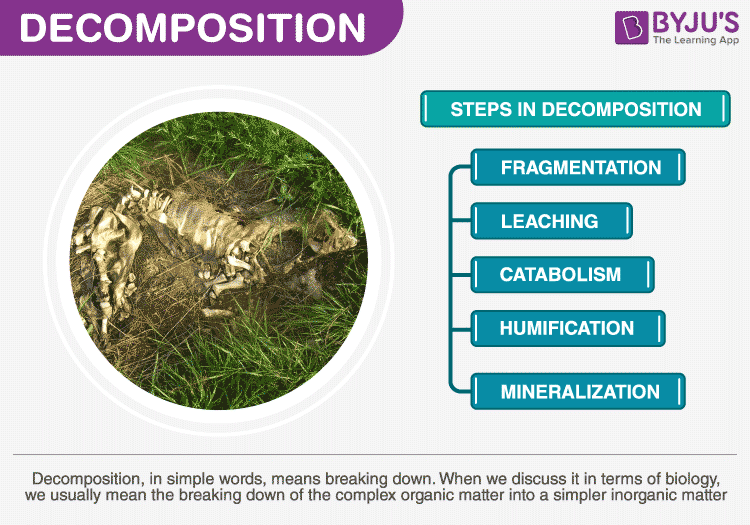 Death and decomposition are an essential part of all life cycles on earth.  In order to permit a successful continuation of life and growth of new plants and animals, older specimens must die and decompose.  This process provides essential nutrients for plants and also for the growth and development of new organisms.

A complete process of decomposition takes place in five different steps or phases:

It is the initial stage of decomposition. Fragmentation means the breakdown of detritus into smaller pieces by the detritivores.

The fragmented particles may contain a lot of water-soluble nutrients which are inorganic in nature. These nutrients get dissolved in the water and seep into the soil and get precipitated in the process of leaching.

Once the complex material is broken down into smaller particles and the inorganic nutrients are removed, it is time to convert the detritus into simpler inorganic compounds. This process is carried out by various fungal and bacterial enzymes by the process of catabolism.

It is the process of formation of a dark-coloured layer of amorphous substance on the soil called humus. It cannot be decomposed easily as it is highly resistant to the action of microbes. The layer of humus is very rich in nutrients as it provides high fertility to the soil.

It is the final step in the process. Mineralization is the process of the degradation of the hummus to release inorganic nutrients.

For more information on Decomposition and the process of decomposition, keep visiting BYJU’S Biology

Test your Knowledge on Decomposition !
Q5