Absorption is the process by which the products of digestion are absorbed by the blood to be supplied to the rest of the body. 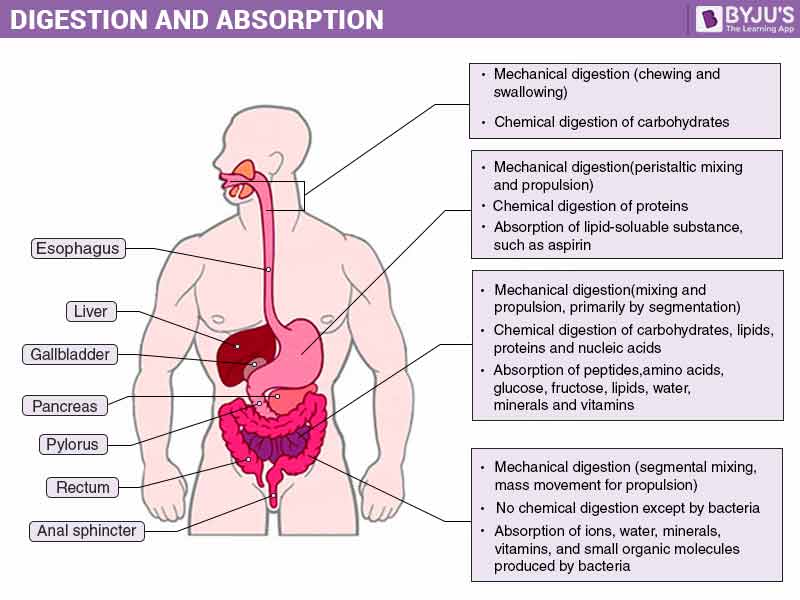 During absorption, the digested products are transported into the blood or lymph through the mucous membrane. Absorption is achieved by the following mechanisms.

After digestion, a  few monosaccharides diffuse into the blood based on the concentration gradient. Example: Glucose, amino acids and ions like chloride.

Electrolytes like Na ions are absorbed by active transport into the blood.

Facilitated transport is defined as the process of movement of solutes across the biological membrane with the help of specific carrier proteins. Some digested amino acids and glucose are absorbed into the blood by this method.

Passive transport is defined as the process of solute movement across a cell membrane without a requirement of energy. After digestion, simpler food substance is absorbed into the blood by passive transport.

Some digested products from fats cannot be absorbed into the blood. Example: Fatty acids and glycerol. These components attach to micelles which are small droplets and form the micelle-component complex. This micelle – component complexes are re-formed into chylomicrons. Chylomicrons are a small protein coated fat globules. Then, chylomicrons move into the lymph vessels and release the digested products into the blood. Finally, the digested and absorbed products reach the tissue to be utilized for their activities. This process is called as assimilation.

To learn more about Digestion and Absorption of Digested Foods, visit BYJU’S.