“Osmoregulation is the process by which an organism regulates the water and electrolytic balance in its body to maintain homeostasis.”

Osmoregulation is a process that regulates the osmotic pressure of fluids and electrolytic balance in organisms. In animals, this process is brought about by osmoreceptors, which can detect changes in osmotic pressure. Humans and most other warm-blooded organisms have osmoreceptors in the hypothalamus. Besides the brain, osmoregulators are also found in the kidneys.

There are two major types of osmoregulation:

Osmoconformers are organisms that try to match the osmolarity of their body with their surroundings. In other words, these organisms maintain the same osmotic pressure inside the body as outside water. They conform either through active or passive means. Most marine invertebrates such as starfish, jellyfish and lobsters are osmoconformers.

Osmoregulators are organisms that actively regulate their osmotic pressure, independent of the surrounding environment. Many vertebrates, including humans, are osmoregulatory. Most freshwater fish are considered to be osmoregulatory too.

Freshwater fish and marine fish osmoregulate in different ways. The environments which they have varying levels of salinity, hence the process of osmoregulation is different.

Freshwater fishes are hypertonic to their surrounding environment, which means that the concentration of salt is higher in their blood than their surrounding water. They absorb a controlled amount of water through the mouth and the gill membranes. Due to this intake of water, they produce large quantities of urine through which a lot of salt is lost. The salt is replaced with the help of mitochondria-rich cells in the gills. These cells absorb salt into the blood from the surrounding water.

Compared to freshwater fish, marine fish face the opposite problem. They have a higher concentration of water in their blood than their surrounding environment. Consequently, it results in the tendency to lose water and absorb the salt. To get around this problem, marine fish drink large quantities of water and restrict urination. Another additional energy expenditure also arises as these organisms actively need to expel salt from the body (through the gills).

Bacteria use a transport mechanism to absorb electrolytes when osmolarity around it increases. The osmotic stress activates certain genes in bacteria that synthesize osmoprotectants.

Plants use stomata on the lower side of their leaves to regulate water loss. Plants growing in hydrated soils compensate water loss by transpiration by absorbing more water from the soil. The plants that grow in semi-arid areas store water in the vacuoles and have thick and fleshy cuticles to prevent water loss.

Animals have a well-developed excretory system that helps to maintain the water lost from the body, thereby maintaining osmotic pressure.

The kidney is the main organ responsible for osmoregulation in humans. Water, amino acids and glucose are reabsorbed by the kidneys. When the water level in the body is high, it releases a large amount of hypotonic urine. When the water level is low, it retains water and produces a low amount of hypertonic urine. Thus, the kidneys maintain the electrolytic balance of the body. 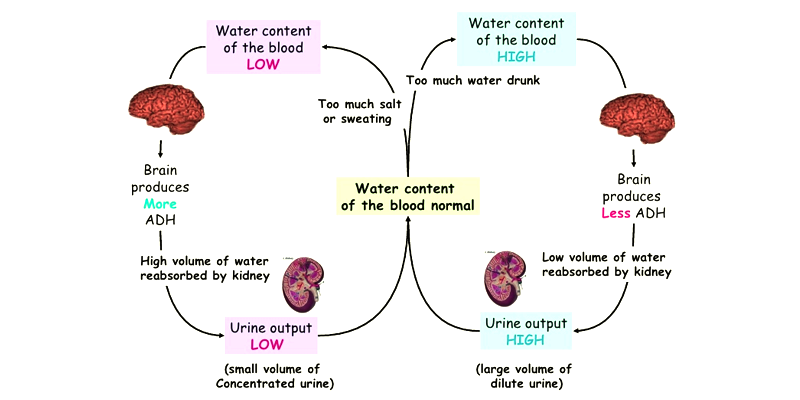 Aldosterone, angiotensin II, and antidiuretic hormones control the absorption process. Some water and electrolytes are also lost by perspiration.

Osmoreceptors in the hypothalamus of the brain control the thirst and secretion of ADH. ADH opens the water channels of aquaporins allowing the water to flow. Thus, the kidneys keep absorbing water until the pituitary gland stops releasing ADH.

To learn more about what is osmoregulation, osmoregulation in different organisms, or other related concepts, register at BYJU’S or download BYJU’s app.

Test your Knowledge on Osmoregulation!
Q5