Metabolism is the sum total of chemical reactions taking place in the cells of the living organisms. All metabolic changes that take place are in multiple reactions and follow a particular pathway called the metabolic pathway. This metabolic pathway includes a series of reactions which involve both breaking and making of biomolecules. In other words, metabolism results in either complex compounds, being formed from simple molecules or simple micromolecules, being formed from complex molecules.

Let us go through the metabolic pathways and see how it helps in living state of organisms in details. 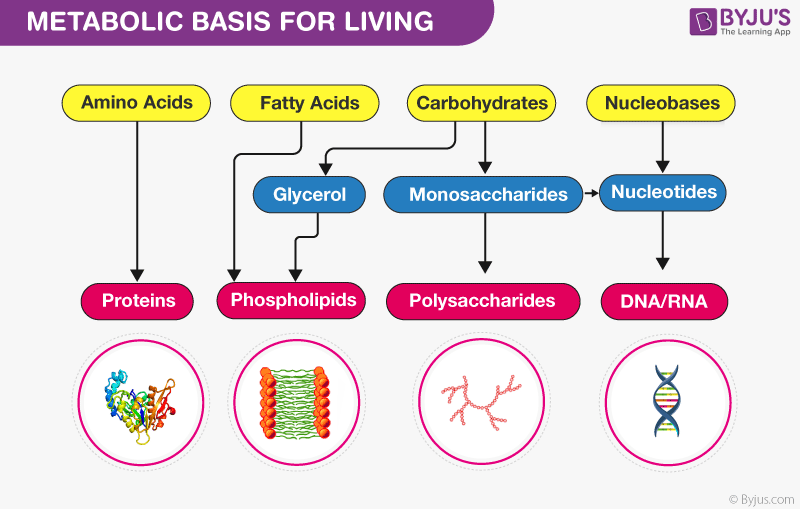 Metabolic pathways involve the extraction of energy by breaking molecules and using this energy to synthesize the building blocks. The process of metabolism occurs in two phases, namely anabolism and catabolism.

The metabolic pathway in which a complex molecule is produced from simple molecules is called an anabolic pathway. Since it involves the synthesis of metabolites, it is also known as the biosynthetic pathway.

For example, amino acids become proteins. The catabolic pathway is another metabolic pathway where a more complex structure is broken down into simple molecules.

Glycolysis is an example of the catabolic pathway where more complex 6-C glucose molecule is reduced to 3-C pyruvic acid.

Anabolism takes place at the expense of energy, i.e., anabolic pathways need energy input and consume energy. Catabolism liberates energy. Energy is released when glucose is converted to lactic acid. In living organisms, the liberated energy packs are stored and reserved for later use. Living systems use this stored energy for making new bonds (anabolism), mechanical work and other purposes in the form of adenosine triphosphate (ATP).

Metabolism and The Living State

As we all know, every living organisms use and release energy. But how do they remain in the living state? What is the role of metabolism in it?

As we know, each living organism, be it prokaryotes or eukaryotic fungi, are composed of thousands of biomolecules/metabolites. But the proportion varies.

Stay tuned with BYJU’S to learn more about the Metabolism.