Role of Other Organs in Excretion

Kidneys play a major role in the process of excretion in humans. These are the bean-shaped structures located on either side of the backbone and protected by the last two ribs. Kidneys help in the elimination of wastes from the body in the form of urine.

Kidneys are the main organs of excretion in humans. Apart from kidneys, other organs like lungs, liver, skin and sebaceous glands also help in excretion.

Our lungs are mainly concerned with respiration, but they help in the removal of a large amount of carbon dioxide and water from our body through the air that we expire. Carbon dioxide is a waste product formed due to the oxidation of food. It is carried to the lungs by the blood.  So it may also be considered as an organ that is involved in the process of excretion.

Next is the liver, which is the largest gland in our body. It secretes bilirubin, biliverdin, vitamins, drugs, etc., which are substances present in bile. Bile pigments are produced by the breakdown of haemoglobin in the worn-out red blood cells in the liver. Bile is the excretory product produced in the liver, it helps in maintaining the chemical levels in the blood and removing the waste away with digestive wastes. These are eliminated from the body and thus help in excretion. It maintains the level of amino acids in the blood. The liver also helps in the conversion of ammonia into less toxic urea that is excreted through urine.

Sweat glands are long tubular glands and are coiled at the ends. They are located in the dermis of the skin and help in maintaining the temperature of our body. During summers when it is too hot outside, sweat, which is a watery fluid containing lactic acid, urea, sodium chloride etc., is secreted from the sweat glands and helps in cooling of the body. 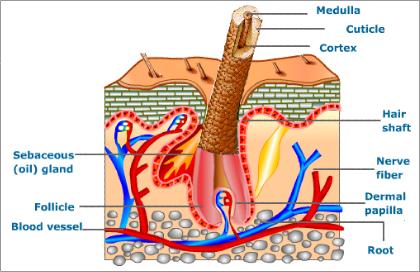 Role of skin in excretion

There is another gland called the sebaceous gland, which eliminates substances like sterols, hydrocarbons and waxes through sebum. These glands are attached to the hair follicle.

Our lower intestinal tract also helps in the excretion by removing the waste products of digestion.

This was in brief about the role of the liver and other organs in excretion. Find more about the process of excretion only at BYJU’S.

Test your knowledge on Role Of Other Organs In Excretion
Q5