One of the key characteristics that distinguish living organisms from non-living is the ability to locomote and move. This is feature is crucial for survival as living organisms need to adapt to their environment and cater to their own biological needs such as food, self-preservation, and mating.

Most living organisms have their own special systems for locomotion and movement. These might include rudimentary structures such as cilia, flagella or much more complex structures like wings or feet. Furthermore, scientists have theorized that locomotion and movement have significantly contributed to man’s evolutionary process – from being quadrupedal to bipedal and increase in the brain’s volume.

Let’s have a glance at the various types of joints in the human body and discover how it helps us to move.

Locomotion is the ability to move from one place to another. The major key factors that help in locomotion are bones and muscles. In humans and other vertebrates, the bones form a framework called the skeletal system that provides structure and shape. Furthermore, these bones allow movement through different types of joints.

A joint, also known as an articulation or articular surface, is a connection that occurs between bones in the skeletal system. Joints provide the means for movement. The type and characteristics of a given joint determine its degree and type of movement. Joints can be classified based on structure and function.

The joints help us to rotate our shoulder, bend our knees and elbows, swivel our neck and more. By definition, a joint is a point where two bones meet to provide a framework that permits movement. Bones are attached to one another by tissues called ligaments. Muscles are attached to bones through tendons.

There are two different types of joints- Structural and Functional classification of joints.

According to the structural classification of joints, they are divided into 3 types, namely:

Fixed joints, also called immovable joints, are found where bones are not flexible. In such joints, bones have been fused together in such a way that they are fixed to that part, most commonly to create a structure. A prominent example of a fixed joint is the skull, which is made up of a number of fused bones.

Other examples include the upper jaw, rib cage, backbone, and pelvic bone, etc.

Cartilaginous joints are partly movable joints comprising of symphysis or synchondrosis joints. These joints occur only in those regions where the connection between the articulating bones is made up of cartilage. Synchondrosis are temporary cartilaginous joints which are present in young children and last until the end of their puberty.

For example, the epiphyseal plates present at each end of the long bones is responsible for bone growth in children. The symphysis or the secondary cartilaginous joints (the place where bones join) is permanent. Examples include the pubic symphysis. Other examples of cartilaginous types of joints include the spinal column and the ribcage.

The synovial joints are the most common type of joint because this joint helps us to perform a wide range of motion such as walking, running, typing and more. Synovial joints are flexible, movable, can slide over one another, rotatable and so on. These joints are found in our shoulder joint, neck joint, knee joint, wrist joint, etc. 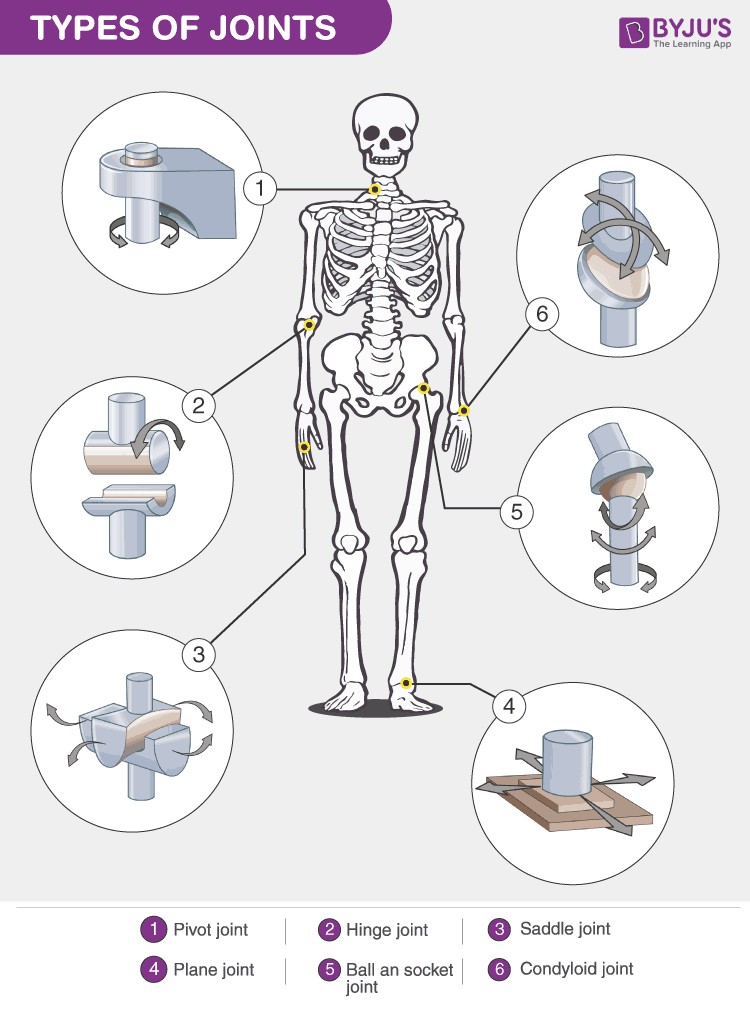 Pictured: Types of Joints and their range of motions

Here, one bone is hooked into the hollow space of another bone. This type of joint helps in rotatory movement. An example ball and socket joint are the shoulders.

In this type of joint, one bone has tapped into the other in such a way that full rotation is not possible. This joint aid in sideways and back-forth movement. An example of a pivotal joint in the neck.

Hinge joints are like door hinges, where only back and forth movement is possible. Example of hinge joints is the ankle, elbows, and knee joints.

Saddle joint is the biaxial joint that allows the movement on two planes–flexion/extension and abduction/adduction. For example, the thumb is the only bone in the human body having a saddle joint.

Condyloid joints are the joints with two axes which permit up-down and side-to-side motions. The condyloid joints can be found at the base of the index finger, carpals of the wrist, elbow and the wrist joints. This joint is also known as a condylar, or ellipsoid joint.

Gliding joints are a common type of synovial joint. It is also known as a plane or planar joint. This joint permit two or more round or flat bones to move freely together without any rubbing or crushing of bones. This joint is mainly found in those regions where the two bones meet and glide on one another in any of the directions. The lower leg to the ankle joint and the forearm to wrist joint are the two main examples of gliding joints.

This was a brief introduction to the different types of joints based on its structure and functions. Stay tuned with BYJU’S to know more in detail about the joints and other related topics @ BYJU’S Biology. 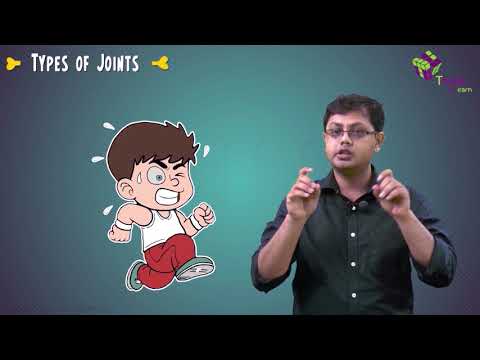 What are the Joints?

Joint can simply be defined as the point or the location within the body where two or more bones meet together.

What are the different types of Joint?

There are 3 different types of Joints and are classified mainly based on their mobility:
Fibrous Joints or Fixed Joints
Synovial Joints or Freely Movable Joints
Cartilaginous Joints or Slightly Moveable Joints.

What are the functions of the Joints?

The primary functions of Joints are to connect bones within our body. Apart from this, it also helps us to move, rotate and also bear weight.

What are the different types of Synovial Joint?

Give examples of Synovial Joint?

What are the types of Fibrous Joints?

Fibrous joints are mainly referred to those joints which are fixed and immovable. There are three types of immovable joints:
Sutures
Gomphosis
Syndesmosis.

Test your Knowledge on Types Of Joints!
Q5