Here, let us discuss one of the types of integral called “Indefinite Integral” with definition and properties in detail.

An integral which is not having any upper and lower limit is known as an indefinite integral. 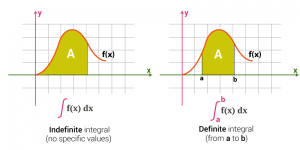 F(x) is the way function f(x) is integrated and it is represented by:

Where in respect to x the integral of f(x) is on the R.H.S.

primitive or anti-derivative is termed as F(x)

Integrand is termed as f(x)

Integrating agent is termed as dx

The constant of integration is an arbitrary constant termed as C

The variable of integration is termed as x

Let us now look into some properties of indefinite integrals.

Differentiation and integration are inverse processes of each other since:

Where C is any arbitrary constant. Let us now prove this statement.

Proof: Consider a function f such that its anti-derivative is given by F, i.e.

On differentiating both the sides with respect to x we have,

Since derivative of any constant function is zero, therefore

The derivative of a function f in x is given as f’(x), therefore

Where, C is an arbitrary constant called as the constant of integration.

Property 2: Two indefinite integrals having the same derivative have the same family of integrals or curves and therefore they are equivalent.

Consider two functions f and g in x such that:

On integrating both sides, we get

where C is any real number.

The integral of the sum of two functions is equal to the sum of integrals of the given functions, i.e.,

Proof: By the first property of integrals we have,

Property 4: For any real value of p,

Proof: From property 1 we can say that

From property 2 we can say that

Go through the following integral problems given below:

Integrate the given function, it becomes:

After simplification, we get the solution

We know that, the inverse process of differentiation is an inetgration.