A locus is a set of points, in geometry, which satisfies a given condition or situation for a shape or a figure. The plural of the locus is loci. The area of the loci is called the region. The word locus is derived from the word location. Before the 20th century, the geometric shapes were considered as an entity or place where points can be located or can be moved. But in the modern Maths, the entities are considered as the set of points which satisfies the given condition.

In Mathematics, a locus is a curve or other shape made by all the points satisfying a particular equation of the relation between the coordinates, or by a point, line, or moving surface. All the shapes such as circle, ellipse, parabola, hyperbola, etc. are defined by the locus as a set of points.

In real-life you must have heard about the word ‘location’. The word location is derived from the word locus itself. Locus defines the position of something. When an object is situated somewhere, or something happened at a place, is described by locus. For example, the area has become a locus of opposition to the government.

A locus is a set of all the points whose position is defined by certain conditions. For example, a range of the Southwest that has been the locus of a number of Independence movements. Here, the locus is defining as the centre of any location.

In Maths, a locus is the set of points represented by a particular rule or law or equation.

The locus of points defines a shape in geometry. Suppose, a circle is the locus of all the points which are at equidistant from the centre. Similarly, the other shapes such as an ellipse, parabola, hyperbola, etc. are defined by the locus of the points.

The locus is defined only for curved shapes. These shapes can be regular or irregular.

Locus is not described for the shapes having vertex or angles inside them.

Locus of a Circle

The set of all points which forms geometrical shapes such as a line, a line segment, circle, a curve, etc. and whose location satisfies the conditions is the locus. So, we can say, instead of seeing them as a set of points, they can be seen as places where the point can be located or move.

We have already discussed the locus of the points which defines the path for a shape (as explained about circle). Now let us see some more examples in 2-D geometry or plane geometry.

The set of points which bisects the line, formed by joining two points and are equidistant from two points, is called perpendicular bisector.

A locus or set of points which bisects an angle and are equidistant from two intersecting lines, which forms an angle, is called angle bisector.

Ellipse is defined as the sets of points which satisfies the condition where the sum of the distances of two foci point is constant.

The set of points or loci, which are equidistant from a fixed point and a line, is called a parabola. The fixed point is the focus and the line is the directrix of the parabola. 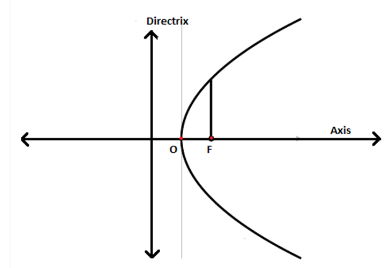 A hyperbola has two focus points, which are equidistant from the centre of the semi-major axis. Hyperbola is defined as the set of points, which satisfies the condition where the absolute value of the difference between the distances to two given foci is a constant.