Exponential growth increases without bound. This is possible for some situations like population, where there is usually some type of upper bound. This leads to limitations on food, space or other scarce resources. Logistic growth is a type of growth where the effect of limiting upper bound is a curve that grows exponentially at first and then slows down and hardly grows at all.

This reduces the logistic function as below:

L = the maximum value of the curve

e = the natural logarithm base (or Euler’s number)

x0 = the x-value of the sigmoid’s midpoint

k = steepness of the curve or the logistic growth rate

The exponential function in the denominator completely determines the rate at which a logistic function falls from or rises to its limiting value.

Carrying capacity is the population limit or the maximum population that the environment can support.

Derivative of the logistic function

This derivative is also known as logistic distribution.

Integral of the logistic function

Spreading rumours and disease in a limited population and the growth of bacteria or human population when resources are limited.

There are many applications where logistic function plays an important role. Some of them are as follows.

Medicine: Modeling of growth of tumours

How many years will it take for a bacteria population to reach 9000, if its growth is modelled by

According to the given, 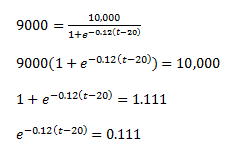 Taking logarithm on both sides,

The graph for the above solution is as below: 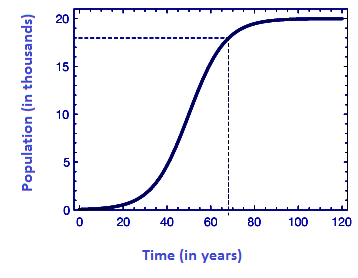