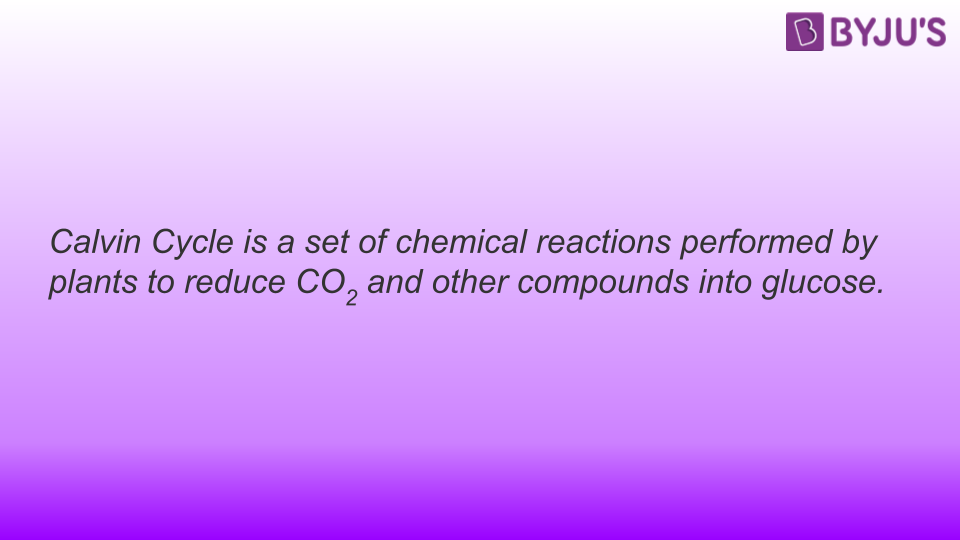 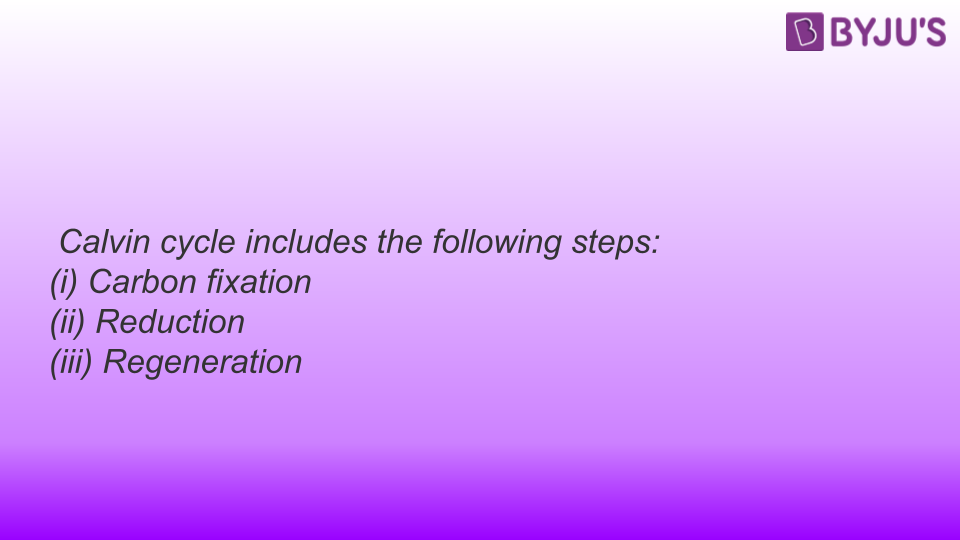 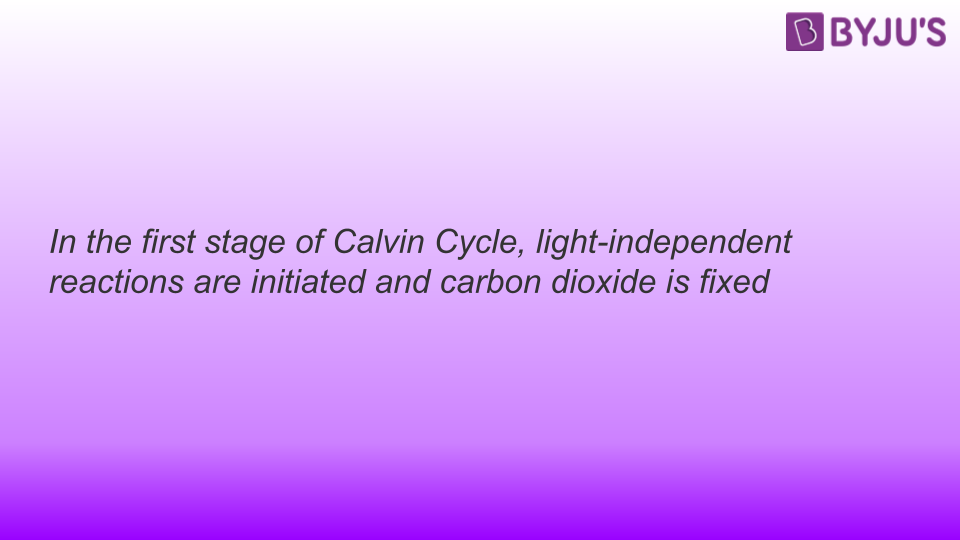 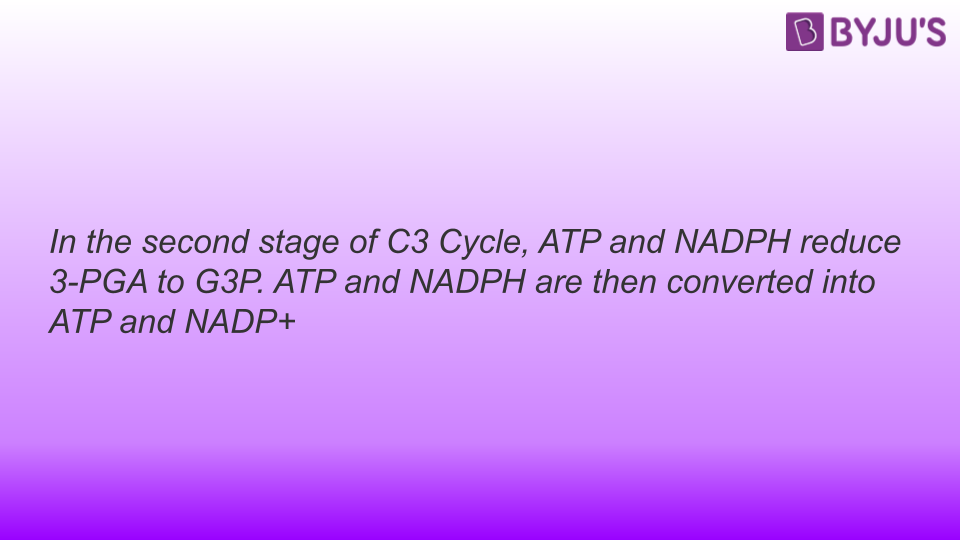 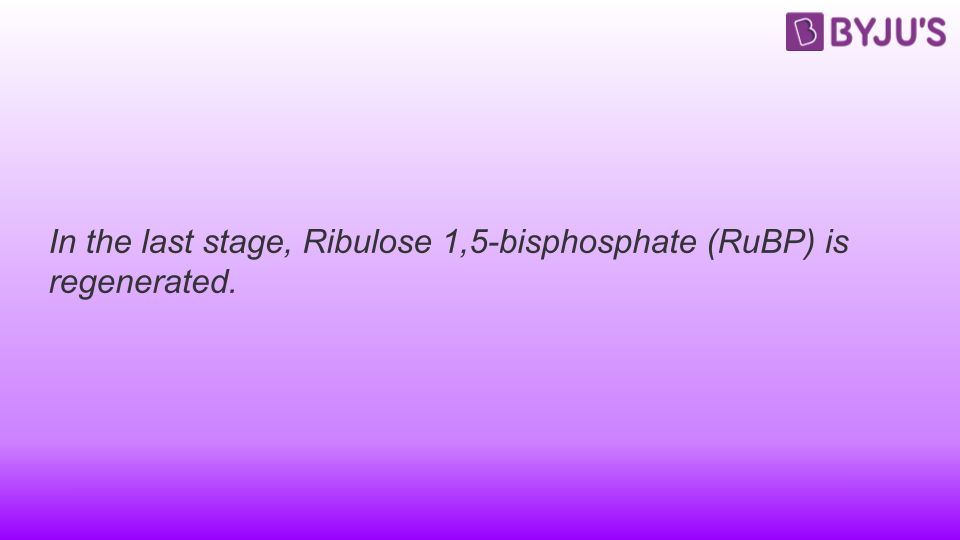 Photosynthesis is the biochemical process that occurs in all green plants or autotrophs producing organic molecules from carbon dioxide (CO2). These organic molecules contain many carbon-hydrogen (C–H ) bonds and are highly reduced compared to CO2.

There are two stages of Photosynthesis –

Light-dependent reactions – As the name suggests, it requires light and mainly occurs during the daytime.

Light-independent reactions – It is also called the dark reaction or Calvin cycle or C3 cycle. This reaction occurs both in the presence and absence of sunlight.

Let us have a detailed look at Calvin Cycle or C3 cycle along with its stages.

“Calvin cycle or C3 cycle is defined as a set of chemical reactions performed by the plants to reduce carbon dioxide and other compounds into glucose.”

What is Calvin Cycle?

Calvin cycle is also known as the C3 cycle or light-independent or dark reaction of photosynthesis. However, it is most active during the day when NADPH and ATP are abundant. To build organic molecules, the plant cells use raw materials provided by the light reactions:

1. Energy: ATP provided by cyclic and noncyclic photophosphorylation, which drives the endergonic reactions.

2. Reducing power: NADPH provided by photosystem I is the source of hydrogen and the energetic electrons required to bind them to carbon atoms. Much of the light energy captured during photosynthesis ends up in the energy-rich C—H bonds of sugars.

Plants store light energy in the form of carbohydrates, primarily starch and sucrose. The carbon and oxygen required for this process are obtained from CO2, and the energy for carbon fixation is derived from the ATP and NADPH produced during the photosynthesis process.

The conversion of CO2 to carbohydrate is called Calvin Cycle or C3 cycle and is named after Melvin Calvin who discovered it. The plants that undergo the Calvin cycle for carbon fixation are known as C3 plants.

The Calvin cycle diagram below shows the different stages of Calvin Cycle or C3 cycle that include carbon fixation, reduction, and regeneration. 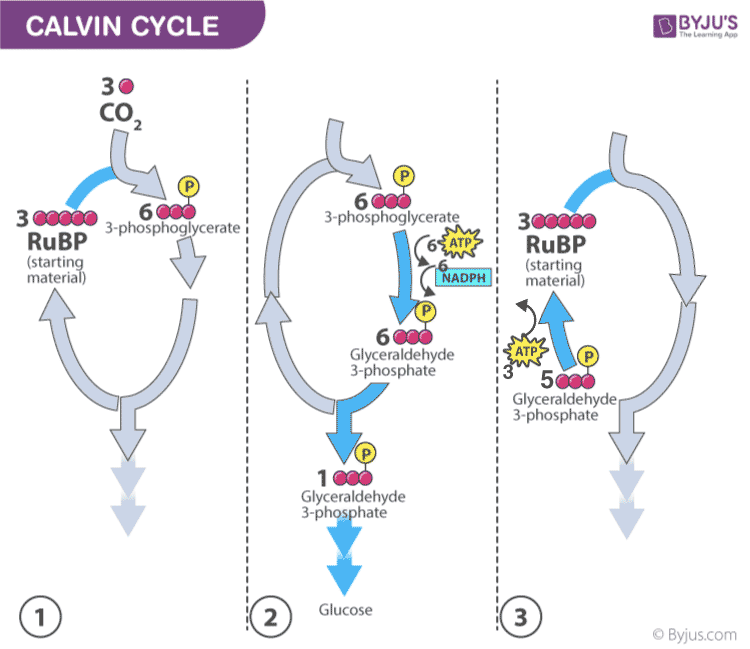 Calvin cycle or C3 cycle can be divided into three main stages:

The key step in the Calvin cycle is the event that reduces CO2.

CO2 binds to RuBP in the key process called carbon fixation, forming two-three carbon molecules of phosphoglycerate. The enzyme that carries out this reaction is ribulose bisphosphate carboxylase/oxygenase, which is very large with a four-subunit and present in the chloroplast stroma. This enzyme works very sluggishly, processing only about three molecules of RuBP per second (a typical enzyme process of about 1000 substrate molecules per second). In a typical leaf, over 50% of all the protein is RuBisCO. It is thought to be the most abundant protein on the earth.

It is the second stage of Calvin cycle. The 3-PGA molecules created through carbon fixation are converted into molecules of simple sugar – glucose.

This stage obtains energy from ATP and NADPH formed during the light-dependent reactions of photosynthesis. In this way, Calvin cycle becomes a pathway in which plants convert sunlight energy into long-term storage molecules, such as sugars. The energy from the ATP and NADPH is transferred to the sugars.

This step is known as reduction since electrons are transferred to 3-PGA molecules to form glyceraldehyde-3 phosphate.

It is the third stage of the Calvin cycle and is a complex process that requires ATP. In this stage, some of the G3P molecules are used to produce glucose, while others are recycled to regenerate the RuBP acceptor.

Discover more about Calvin cycle or C3 cycle, its stages, and other topics only @ BYJU’S Biology

What is Calvin Cycle?

Calvin cycle is also known as the C3 cycle. It is the cycle of chemical reactions where the carbon from the carbon cycle is fixed into sugars. It occurs in the chloroplast of the plant cell.

What are the different steps involved in the Calvin cycle?

The different steps involved in the Calvin cycle include:

What are the end products of C3 cycle?

ADP, NADP, and glucose are the end products of the C3 cycle. ADP and NADP are produced in the first stage of C3 cycle. In the second stage, glucose is produced.

What is carbon fixation in the Calvin cycle?

In the carbon fixation of the Calvin cycle, the carbon dioxide is fixed to stable organic intermediates.

Why is the third step of the Calvin cycle called the regeneration step?

The third step is known as regeneration because Ribulose-bis phosphate that begins the cycle is regenerated from G3P.