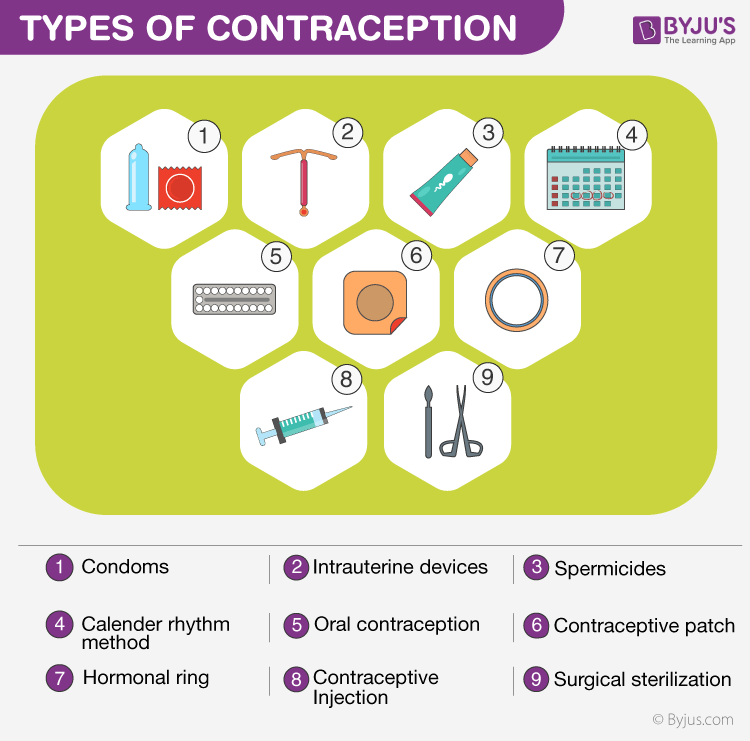 Contraception is an artificial method or other techniques, mainly used to prevent pregnancy as a consequence of sexual intercourse. When a sperm reaches the ova in women, she may become pregnant. Contraception is a method that prevents this phenomenon by:

It is a birth control method that acts on an endocrine system. It is composed of steroid hormones that comprise both oral and injectable methods. It is proved to be highly effective when taken on a prescribed schedule. The methods that are available currently can be used only by women. Some of the different methods of hormonal contraception include patches, IUD’S, implants, oral pills, injections and a vaginal ring.

There are two types of oral birth control pills. The progestogen: which is only pills and the combined oral contraceptive pills. Both pills help to prevent fertilization. It is prevented mainly by thickening cervical mucus and inhibiting ovulation. If any of the pills are taken during pregnancy, there would be no miscarriages or cause any kind of birth defects.

Barrier contraceptives are devices that are used to prevent pregnancy by blocking sperm from entering the uterus. Some of them include female condoms, male condoms, contraceptive sponges with spermicide, diaphragms and cervical caps. Among them the most common birth control methods are condoms. They help in protecting against HIV and sexually transmitted diseases. Most of the modern condoms are made up of latex.

Contraceptive sponges with spermicide give the best barrier protection method. The spermicide kills most of the sperms entering the vagina. Then the remaining sperms are blocked from passing through the cervix to fertilize an egg.

Emergency contraceptive is medications that primarily prevent fertilization or ovulation. There are lots of options namely mifepristone, ulipristal, levonorgestrel and high dosage control pills. Well, these methods do not affect the rates of sexually transmitted diseases, condom use, sexual risk-taking behaviour and pregnancy rates. All methods consist of minimum side effects.

Stay tuned with BYJU’S to know more in detail about contraception.