Difference Between AIDS and HIV

The terms HIV and AIDS are often used interchangeably. They are, however, completely different from each other. Where AIDS is an immunodeficiency disease, HIV is the virus causing it.

Following are the important difference between AIDS and HIV: 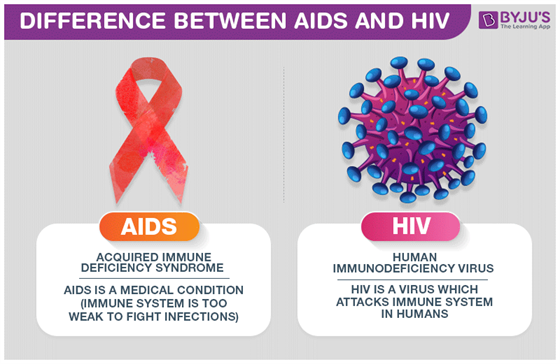 HIV stands for Human Immunodeficiency Virus. It is the virus that leads to acquired immunodeficiency syndrome, or AIDS, if not treated. Unlike some other viruses, the human body can’t get rid of HIV completely, even with proper treatment. So once you get HIV, you have it for life.

AIDS is the most severe phase of HIV infection. People with AIDS have completely damaged immune systems, which may also result in an increasing number of severe diseases, called opportunistic infections.

HIV (Human Immunodeficiency Virus) is a virus that infects the immune system, decreasing its ability to fight off other infections and diseases.

How Is HIV Transmitted?

HIV can be transmitted only through specific activities including:

What Are the Stages of HIV Infection?

HIV can be transmitted only through specific activities including:
There are three stages of HIV infection :

What are the early symptoms of HIV infection?

People affected with an HIV infection often feel like they have the flu. Other early symptoms include:

What are the treatments for HIV?

List out the different types of the human immunodeficiency virus (HIV)?

There are two main types of the human immunodeficiency virus (HIV) – HIV-1 and HIV-2. Both can lead to AIDS and are very different from each other.