“Extinction is the process of evolution that leads to the dissappearence of a population or species.” 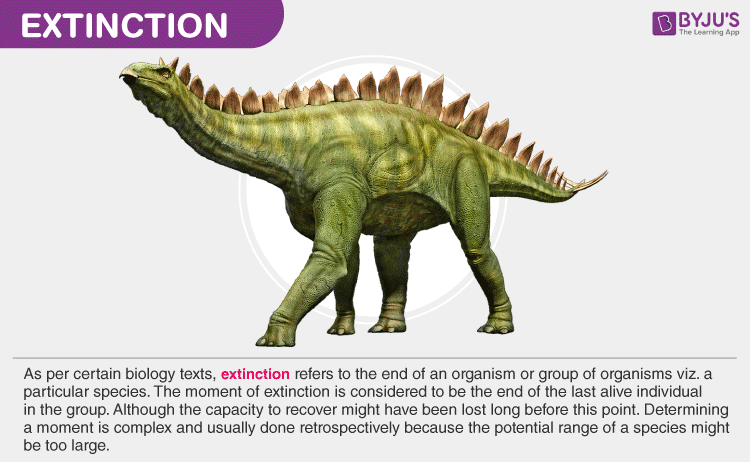 When a species becomes extinct, all its genetic heritage is lost. The species evolve into new species in order to adapt to the environmental changes or changes in the genetic heritage.

Over 99% of all the species that once lived on the Earth amounting to over five billion species are estimated to be extinct. As per the estimations on the number of current species, a range from 10 -14 million, of which more than 1.2 million have been studied and more than 86% have not yet been discovered.

This could happen naturally due to a change in the climate or because of human activities like overhunting or due to the destruction of habitat.

Despite the uncertainties, extinction has three major elements. 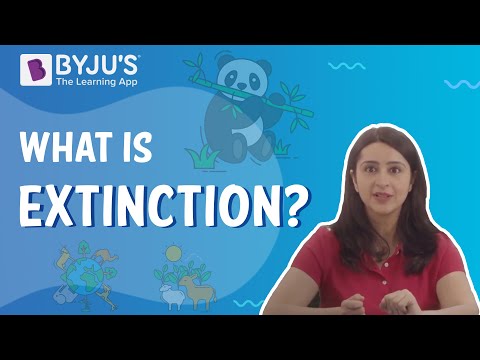 The important causes of extinction include:

A meteor strike on the Yucatan peninsula in Mexico led to the disappearance of dinosaurs millions of years ago. Most of the mass extinctions, such as KT-extinction or Permian-Triassic extinction were caused due to such events. The astronomers constantly keep an eye on comets or meteors that could lead to the end of human civilization.

Climate change is yet another factor that could destroy terrestrial organisms. During the end of the last ice-age, most of the megafauna were unable to adapt to the changing warm temperatures. They died due to lack of food and hunting by early humans. Even modern civilization is stepping towards the threat of extinction due to global warming.

Various epidemics had been the cause of extinction of a large population of humans and animals on earth. The Black Death wiped out one-third of the European population in the Middle Ages.

Every animal has its own comfort zone where it can breed and raise its young ones. For eg., a bird is comfortable only on the branch of a tree. Due to the expansion of human civilization and industrialization, the forests have been destroyed which are an abode to most of the animals. Due to lack of space and eventually food, the populations of many organisms have been minimised.

Once the number of species starts decreasing, the gene pool of that species grows smaller. Eventually, there is a lack of genetic diversity. For eg., due to habitat loss, the African cheetahs have a considerably low genetic diversity.

The better-adapted populations win over the ones that lag behind. For eg., the pre-historic mammals were better adapted than the dinosaurs. The ones which are well-adapted survive, while the others become extinct.

The pollution from the industries and vehicles have led to a drastic change in the oxygen levels in the atmosphere as well as water. This has led to the extinction of most of the aquatic as well as terrestrial species.

Following are the important examples of extinct animals:

To know more about what is extinction and the causes of extinction, keep visiting BYJU’S website or download BYJU’S app for further reference.

Test your Knowledge on Extinction!
Q5