Filariasis is a parasitic disease caused by a roundworm of the family Filarioidea. The filarial worms are transmitted and spread by blood-feeding black flies and mosquitoes. Upon entering the body, the larvae of the worm accumulate in an organ of the body and multiply where they cause the chronic inflammation of that organ. Depending upon the infecting parasite, there are two different kinds of filariasis that affect different parts of the body.

Following are the different types of filariasis elephantiasis:

It is caused by the Wuchereria bancrofti worms, Brugia malayi and Brugia timori. These worms affect the lymphatic system especially the lymph nodes. Chronic cases of lymphatic filariasis lead to the disease Elephantiasis.

It is caused by the Loa loa worm which burrows itself in the subcutaneous fat layer right under the skin. These worms are responsible for river blindness. 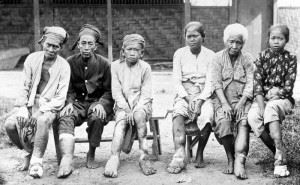 The filariasis elephantiasis symptoms include:

The Life cycle of a Filarial worm

The life cycle of the filarial worm is explained below:

Elephantiasis is caused by three types of parasitic worms:

When the infected Anopheles mosquitoes bite a healthy person, the larvae called microfilariae moves into the lymph nodes and develop into adult worms and persist for years.

Treatment and Preventions for Filariasis

Filariasis is one of the painful diseases caused by mosquitoes. There are several drugs and other and surgical procedures available to treat the stressful diseases by destroying the worms present in the blood. Along with this treatment, certain precautions should be followed to preventing mosquito bite.

Filariasis and elephantiasis are not different from each other since the latter is a type of filariasis, commonly known as lymphatic filariasis.

Test your Knowledge on Filariasis or Elephantiasis!
Q5