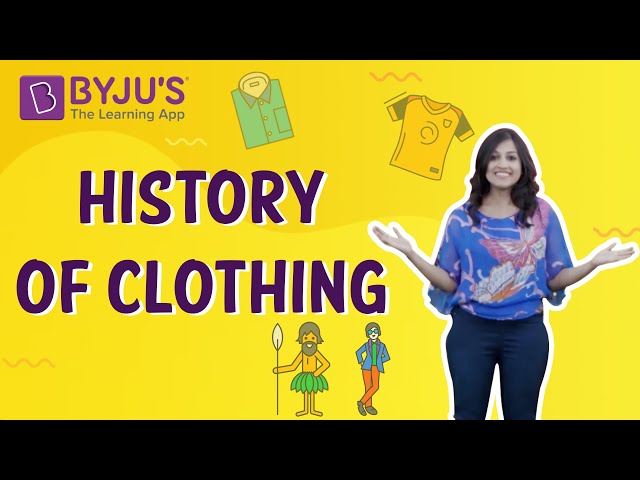 Clothes or clothing are the collective terms used to describe the different types of materials worn on the body. It is a human characteristic to protect our bodies from cold, rain and other climate change or weather conditions.

Early humans, who lived two million years ago used to cover and protect their bodies by wrapping tree leaves, woven grass or tree barks, bones, skull and the skin of dead animals, etc.

According to the Anthropologists, there is no information about when we humans started using clothes. However, some records say that humans started wearing clothes about one million years ago. Neanderthals, subspecies of archaic humans and the distinct genus Homo, are an extinct species who lived in the countries of Eurasia from circa 400,000 until 40,000 years ago and were the first humans to wear clothes. The idea of sewing clothes originated from these Neanderthals, as they used to sew animal skin.

As time passed, the clothing changed. According to history, clothes changed along with the culture, fashion and wealth. Extraction of fabrics and waving textiles was first started in the Middle East during the late Stone Age.

The first material used for clothing is the natural fibres obtained from both plants and animal sources. These include cotton, flax, wool, leather, silk, etc.

The first plant fibres used for extracting fibres are from flax seeds. Flax fibres are 36,000 years old. China was the first country to start with silk production, which was between 5000 and 3000 BC, where silk was extracted from the cocoon of the domesticated silkworm and weaved.

The Evolution of clothing and textiles from the animal’s skin and plant materials is vast and colourful. Along with different cultures, different varieties of clothes appeared. Different types of fibres have their history.

Cotton was cultivated in Pakistan about 3,000 BC. Wool was being woven about 4,000 BC in Egypt. Nylon, an artificial fibre was invented in the year 1935, which was used as a replacement for silk.

This was a brief introduction to the history of clothing materials. Stay tuned with BYJU’S to learn more about fibre, yarn, fabrics, and other related topics @ BYJU’S Biology.